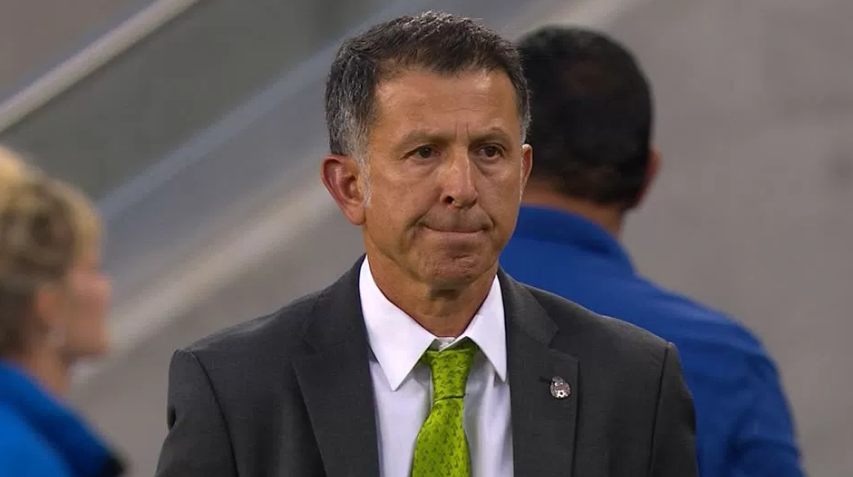 Things are going quite well for Mexico in the Hexagonal.

After four games, El Tri is sitting comfortably in first place in the Hex with a total of 10 points gained. Mexico is the only team left without a loss and has so far only allowed one goal during the final round of qualifying.

With Juan Carlos Osorio leading the roster, El Tri has yet to resemble the same squad that struggled against numerous CONCACAF rivals in the 2014 World Cup qualifying campaign. Mexico not only failed to earn expected wins during the previous run, but also constantly looked out of sorts without much spirit or motivation from key players.

Recently for El Tri, that couldn’t be further from the truth.

Mexico is charging through the competition and is now on the cusp of clinching a place for Russia 2018. Ahead of Thursday’s qualifier at home against Honduras, prominent figures such as Carlos Vela and Giovani dos Santos also appear to be showing plenty of confidence and maturity.

“We’ve been working very hard in training and off the field the relationship between everyone is spectacular,” said Dos Santos during a press conference on Wednesday. “We hope that those relations are seen on the field.”

“This is a strong group that is constantly becoming closer and contributing their best,” he later added.

Vela, who was once a controversial player for turning down national team call-ups, mentioned his own personal development during the same press conference.

Gone are the days when uncertainty and worry defined the Mexican national team. Despite the fact that the 7-0 loss to Chile still looms large over Osorio, El Tri appears more than prepared to walk away with a victory this Thursday night at the Estadio Azteca.

Key to success for Mexico — Overload the attack

The last time Honduras and Mexico met at the Azteca, Los Catrochos were able to hold El Tri to a 0-0 draw in September of 2016. Honduras was more than happy to sit back while Mexico maintained a significant amount of possession in the draw.

More than likely, El Tri will have to deal with another parked bus, which means that Osorio will have to throw plenty of numbers forward. Even if the manager decides to rest a couple of regular starters before taking on the United States this Sunday, he still has a wealth of attacking names that could be utilized in a high-pressing 4-3-3 formation.

If necessary, and if Honduras decides to close up shop from the first minute, that 4-3-3 could even turn into an audacious 2-4-4 late into the game.

The 28-year-old, who has had his fair share of infamous moments for club and country, has finally become a team player for El Tri. In the recent win over Ireland, Vela was one of the best on the pitch with his clever and accurate passing. His goal in the second half also exuded confidence as he calmly placed the ball into the back of the net.

The winger is motivated, and with a big summer ahead for the national team, Vela is easily one of the players to keep an eye on.

Nothing is more difficult than predicting what Osorio will do with his roster. Will he rest key players? Will he once again try out a new option or two?

One thing we do know is that a few players are doubtful to play for 90 minutes tomorrow. Early reports indicate that Andres Guardado, Rafael Marquez, Nestor Araujo and Jurgen Damm aren’t expected to be in the initial starting XI tomorrow. With that in mind, this is how I think Mexico might lineup. 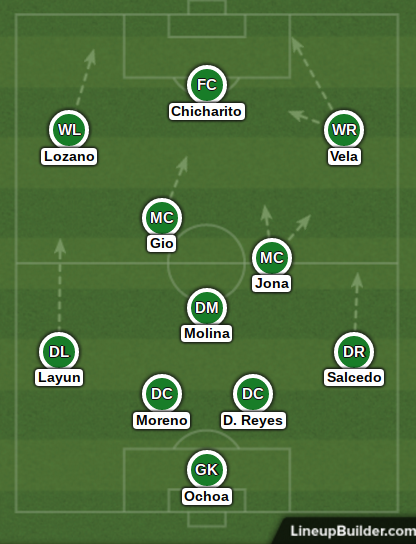 Edit: Early Thursday morning, it was announced that Jesus Molina didn’t make the cut for the Confederation Cup roster. I’m thinking this means that we might see Jonathan dos Santos in that DM role or possibly Diego Reyes. Who knows with Osorio though…

Always looking for a good game or pint, sometimes both at the same time. When he's not trying to find a new bar to watch some soccer, he's usually writing at home and hanging out with his cat, DJ Cuddles.
Newer Post
Colorado Rush and Club El Azul Each Control Own Destiny
Older Post
FC Barcelona Summer Camp in San Diego