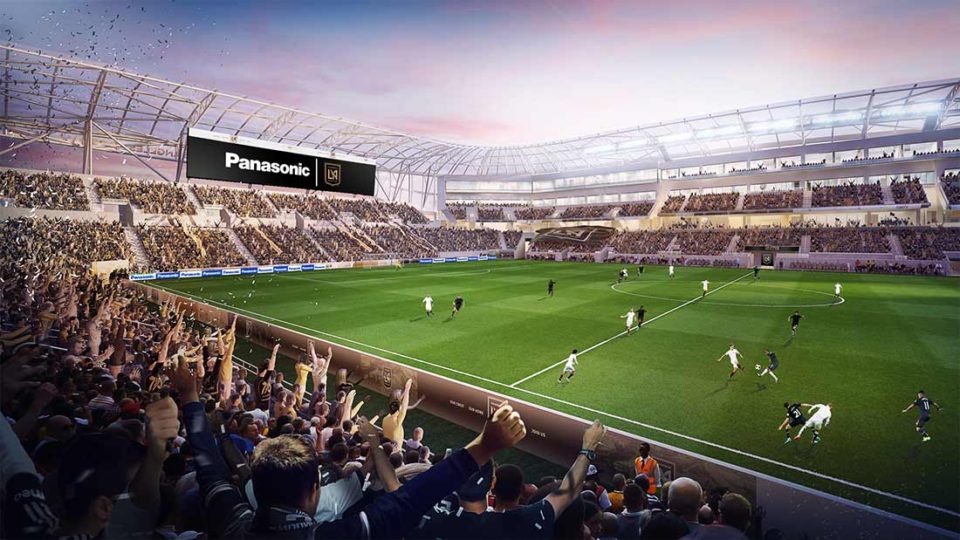 Deal includes lots of digital signage inside the stadium and out.

MLS expansion side LAFC announced a partnership with electronics giant Panasonic on Thursday. The deal includes digital signage, over 15,000 square feet of LED video display all told, including a marquee sign inside the stadium that will measure an estimated 129 feet wide by 29 feet tall. Add to that planned digital signs outside the stadium, both along the highway and in the “surrounding entertainment district” at Banc of California Stadium in Los Angeles.

“We couldn’t be more excited to partner with Panasonic who shares our mission to both excite, engage and entertain our fans and players in our new stadium,” said LAFC Club President and Owner Tom Penn in a statement on the deal. “Panasonic will help bring our stadium life with its digital displays surrounding the pitch and will provide the most technologically-advanced soccer stadium in the MLS to the heart of LA.”

The partnership with Panasonic is the latest for LAFC, who still have 13 months before they first play a competitive match in MLS. While construction at Banc of California Stadium is well underway, projected to be finished for the 2018 season, the club has been making founding partnership deals ahead of constructing their first roster.

Including Thursday’s announcement with Panasonic, LAFC has thus far announced partnerships with 5 companies.

In January, the club announced a deal with airlines Delta and Aeromexico, making the companies official airline partners, providing transportation to away games and other events, as well as providing fan engagement initiatives.

Previous to that, last October a partnership was announced with technology giants IBM, providing the technological infrastructure for Banc of California Stadium. The uses of this are wide-ranging, from something the fans will surely care deeply about, wireless internet access in the stadium, to providing security capabilities, “that can identify issues involving the stadium’s ingress and egress before they have an impact on fans. This will help create a secure stadium that utilizes advanced physical security systems.”

And LAFC’s corporate partnership efforts kicked off last August with the reveal of the club’s new stadium naming rights as Banc of California Stadium. That deal was reported to be for 15 years, costing $100 million, larger than some deals in “bigger” American pro sports leagues.

Add to that non-commercial partnerships, from the official affiliate deal with USL side Orange County SC, announced in December, and the LAFC academy partnerships with Slammers FC for the girls development academy and with TOVO Academy Barcelona to help build the boys academy program, and the deals are really starting to stack up for LAFC.

Of course, this is the beginning and there are sure to be more deals to come. From those that confer status, like jersey sponsorships, to those that mark particular products “the official [insert consumer product here] of LAFC,” to those that will help build Banc of California Stadium into the “Cathedral of Soccer” promised by the club’s owners, forming partnerships may not be as sexy as hiring a coach or building a roster, but in this day and age they are pretty important for the health of a professional sports team.

Newer Post
Episode 16 – #MLSinSD Update, Plus a Premier League Check Up, and a Talk about Tijuana
Older Post
DMCV Sharks Accepted into ECNL for 2017-18 Season