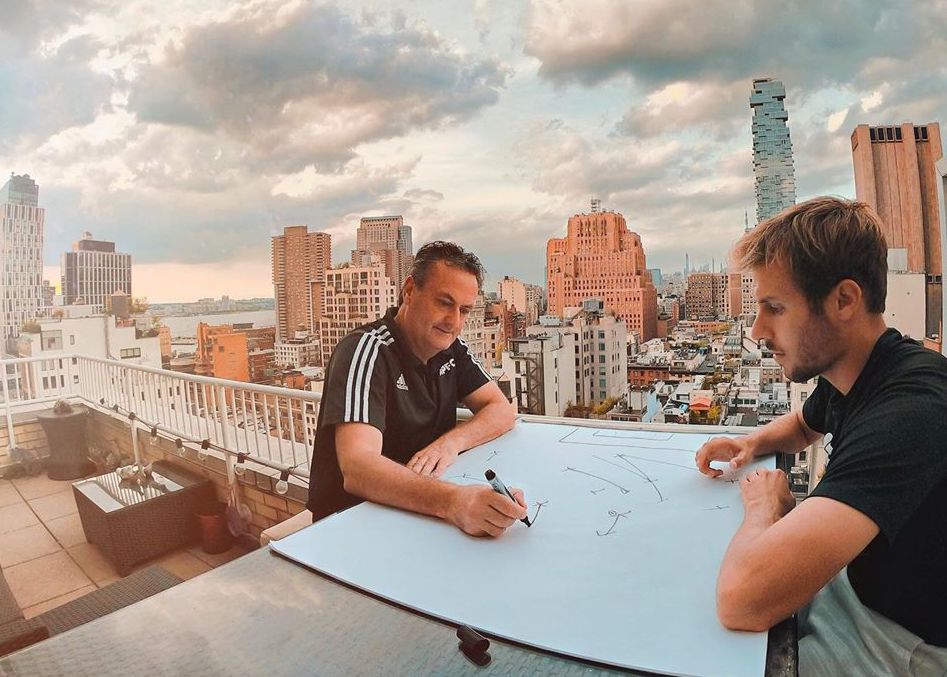 I’m sitting with Co Founder of APFC, Bernat Franquesa. His program includes camps, training and private lessons, player video analysis, cognitive virtual reality, European tours, consulting for youth clubs/academies and courses for coaches. Full disclaimer: I have known and spent time on the pitch with Bernat for the past 3 years. His vision is clear and his program allows youth players from all ages to learn the game from a Catalan perspective. “APFC” stands for Albert Puig Football Concepts.

Yes, Bernat has direct ties to La Masia, the famed youth academy of FC Barcelona. players such as Lionel Messi and Andres Iniesta have come through La Masia to become world-class talents. Bernat’s brother, Enric was an FC Barcelona Academy player and is now playing with Villareal in Spain. Bernat’s partner and Co-founder is none other than Albert Puig who was the technical director of La Masia working with Pep Guardiola. Albert spent last year as Assistant Coach of NYCFC of the MLS and is currently the head coach of Albirex Niigata in Japan. Together, through the APFC program, they are changing the way youth players learn The Beautiful Game.

How exactly are they changing the way players learn the game? Let’s ask him to explain…

SB: What does the APFC program offer youth players that they may not be getting in the typical American youth soccer experience?

Bernat: First I would like parents to understand what is going on here in the USA regarding soccer. It’s a fantastic place for all players because parents and players they have passion, they have discipline, it’s an incredible country where everyone tries their best. But on the other side, it is not a country that has been successful developing top players. How is that possible that when we are talking about a country that has a lot of money, the best facilities, the best athletes, but it is impossible to see on the TV many American players making their dream to play in Europe. The main problem is coaching. You cannot create good students with bad teachers. You need good teachers to create good students. Coaches here really want to learn but the basic problem is USA has a lot of other sports here like football, baseball, tennis etc you learn through repetition of movements. It’s all about doing the same movement 10,000 times, and people here think coaching soccer is the same. To teach technique repeatedly is the huge mistake. For us in APFC technique is a result of learning “soccer language”. Which is, for example, learning what is a good body profile, keeping your head up, understanding breaking lines, playing between lines, receiving with back foot and decision making. Many of these are actions that are made without the ball. Here coaches do a lot of dribbling exercises but players do not have any decision making. Our job as coaches is to prepare the players to play the game. And for this we need good concepts, good information so players can make good decisions.

SB: What is your ultimate goal of APFC?

BF: Our dream is to change soccer here in USA. The first goal was to create an online coaching education where we can explain all the knowledge gained from Albert Puig at La Masia as he developed hundreds of professional players. The best way to create good players is to create good coaches. When the player get sbetter information, they can make better decisions. The next goal was the idea to offer trainings to players.

SB: Why base the program in USA and more specifically why California?

“we decided if USA had good coaches and good methodology then the USA could become the best in the world.”

BF: Albert came from FC Barcelona to California to coach in a top youth academy and could not understand why the best players in the world are not American. We saw good discipline and good attitude, good skills and good athletes. Then we decided if USA had good coaches and good methodology then the USA could become the best in the world. Albert took players from California to go play in Europe, and Jack Imperato is currently in Villareal. And there are a lot of Jack Imperatos in USA. There is incredible potential here to be the best in the world. People here really want to learn and the coaches are always looking for more information they just need to learn in the right way.

If someone told me a year and a half ago where I would be today I would of thought they were crazy. So grateful to share so many great experiences and memories with such an amazing team and great group of people who have become some of my best friends for life. Now time to take a month back at home to relax with friends and family, and return to this amazing club even stronger than before?

SB: Is APFC only for the elite level players?

BF: I was surprised that parents and players think they are not good because they play on the 2, 3rd or 4th team. But, those players that may have not been exposed good drills or the concepts and this style of teaching are the ones that improve so much and so fast! Then APFC is not only about concepts and not only for elite players. We teach habits on and off the field. We are trying to bring the European model to the USA. How to speak with teammates, how to speak with the coach, how to respect the game and learn values that are also for off the field. My brother, who played in the La Masia and is a professional player. But I can tell you about his teammates and how the values that he learned helped him to grow as a person and be used for life. He has friend that never made it through to play professionally but they have great jobs and much due to the values they learned through their team in soccer. That is important aspect we teach along with our methodology. There are 40 concepts that we teach and the fundamental 8 basic concepts can begin as young as 6 years old and still be taught at 16 or older. We explain the concepts in ways appropriate to the age of the player.

SB: What is coming up next for APFC?

BF: We are taking 4 teams to Spain in MIC Cup and Mundialito. We go to Europe not just to play but to compete against. People think Real Madrid and Barcelona that the players are super different than here. Really, talking about talent, its exactly the same, the difference is the rhythm of the game, the decision making, they speak the same language inside the field, there is an identity. Th at is the difference, not the talent of the players. At APFC we work on these that, this rhythm of the game, this language. In out last trip to Barcelona our 2005 team tied Real Madrid and lost to the champions Real Zaragoza in Penalties. We really want to show the parents and everyone that The gap is super close and its just about talking the same language in the field and this language is concepts there is no more secret. It’s not that being American you cannot understand the game, its all about the information, we can prove that by our success in Spain. And our goal is to do it with more teams.