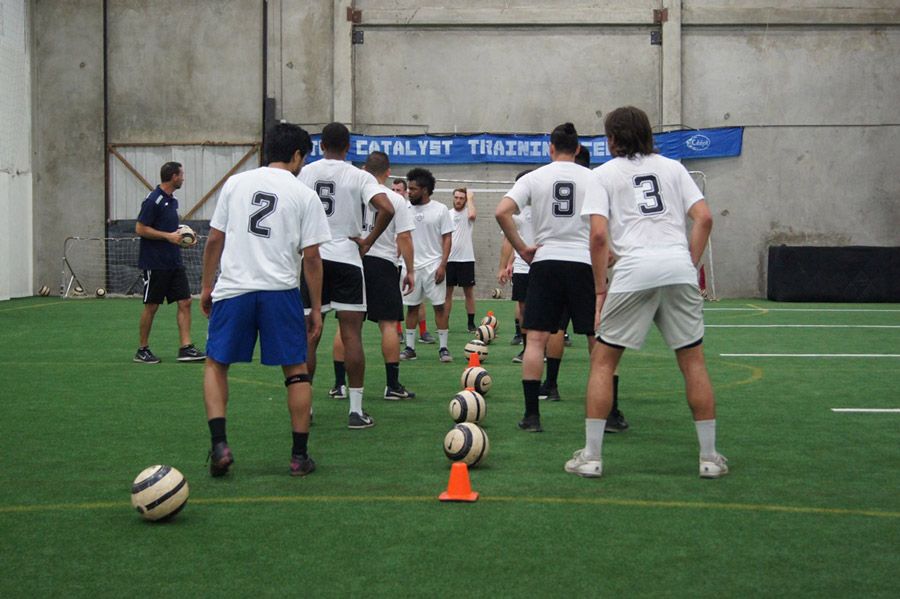 Since the launch, the Catalyst Training Center has provided the uniqueness of a specialized training center to many players and coaches in the San Diego region. “When I first opened TCTC people told me I should make it a multi-sport facility, but I believed very strongly in my vision and philosophy that to get the most out of an athlete they need to be developed by a trainer who has competed in that same sport at a high level.”

Alicia created an environment that reflects a certain soccer culture from training to staff. Their training programs include injury deterrence training, ball control training, and augmented athleticism. Their training staff consists of current and former soccer players who understand the skills needed to improve your game. Now in 2016, she credits the local soccer community for guiding the vision for TCTC and its future.

Located in Mira Mesa, the facility provides a unique venue for soccer players, coaches, and former players. “The primary reason we stand out against other gyms or sports performance centers is that we are specific to training only soccer players,” said Alicia. In addition to working with highly skilled athletes, her husband Matt Couch is a senior trainer. Alicia and Matt have formalized their approach to athlete development and personal soccer training through an educational process that certifies each member of the training staff.

Their main highlight at the facility is the custom Training Program. Currently, they have over 100 players who train with TCTC each week in private lessons. In the 5 years they have been open, Alicia, Matt and the rest of the trainers have completed over 20,000 private one-on-one lessons. Alicia mentioned the popularity of the custom Training Program because “time and time again we prove that our methods for advancing a player based on ‘body control before ball control’ is highly effective.”

Alicia is a graduate of San Diego State University. She first starting working in training and conditioning while rehabilitating from 5 knee injuries over the course of her college career. “I volunteered in the weight room at SDSU and was mentored by the Director of Strength and Conditioning.” As soon as she finished her final season as an Aztec, the director offered her a job as an assistant strength coach with the soccer, basketball, softball, and swimming teams.

The well-being of the athlete’s body became her priority, that’s when the idea of TCTC was born. TCTC’s mission continues to be improving athleticism, enhancing ball skills, and lowering risk of injury. The San Diego SeaLions, the WPSL 2013 National Champions, have been training with TCTC for their preseason training for 5 years now and the NPSL San Diego Flash utilized the facility throughout their existence.  Most recently, NPSL team North County Battalion started their preseason conditioning with Couch at TCTC.

On the youth side of the market, they are independent of club affiliations so coaches and directors encourage their players to train with Alicia and her staff. TCTC staff have worked with Shannon MacMillan and Warren Barton at the DMCV Sharks, Steve Yorke and Denyce Cooper at FC Heat, Matt Hall at Vista Storm, Paolo Landini at Hostpurs, and Kristin Jones and Kelly McDonald at La Jolla Impact to name a few. Overall, the TCTC has built a strong foundation using personal experience and commitment to the game.By focusing heavily on customized training, Alicia and TCTC staff are recognizing a player’s time, energy, and money investment and how that will get the greatest return.

For more information on The Catalyst Training Center, visit their website or check out their Facebook page.