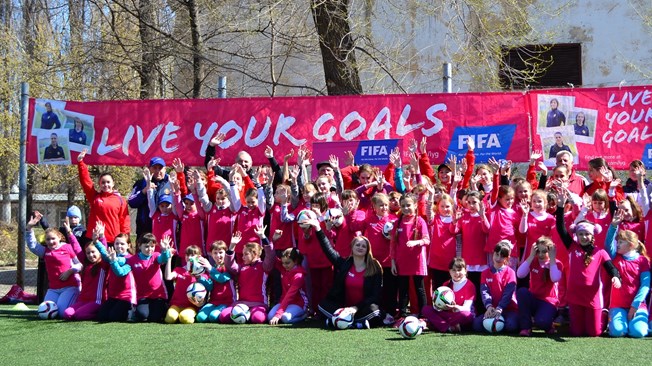 We are days away from the start 2015 Women’s World Cup games. This tournament marks a pinnacle time in these women’s lives, it is the number one priority in the eyes of coaches, players and fans. And of course we want to hear all about the passion, love, blood, sweat and tears on Facebook, Instagram, and twitter.

[quote_box_center]FIFA’s Director of Communications & Public Affairs, said, “FIFA’s digital engagement last year highlighted the way in which the viewing experience around major sporting events, via the ‘second screen’, has changed forever. The 2011 FIFA Women’s World Cup Final set a then world record for the number of tweets per second. We want fans to join the global conversation again this summer, but we’ll be using the competition and our digital platforms to drive higher grassroots participation too.”[/quote_box_center]

The World Cup inspires young girls and women to strive for excellence and be the best you can be; a truly powerful mantra that the ladies of the cup live by. FIFA wants to capture that spirit and share it via the FIFA Live Your Goals women’s football development campaign. The Live Your Goals campaign is part of FIFA’s long-term commitment to support women’s football worldwide.

Some objectives include increasing the number of female football player to 45 million by the 2019 Women’s World Cup, amping up the excitement about women’s soccer, and providing opportunities for women and girls worldwide to become a part of the number-one female team sport.

Encouraging young girls to participate in soccer shows them how they can achieve their goals through the sport while practicing a healthy lifestyle. Soccer gives developing girls a strong female role model to look up to and improves their self-image and confidence. Soccer also empowers women and girls to rise above society’s gender prejudice and discrimination.

We encourage you to get involved and share your stories on social media along with socce4r stars like Abby Wambach and Christine Sinclair and using the #Liveyourgoals! Even if you think that you don’t have many followers so no one will see your post, it is important to rember that it is not as hard to gain more instagram followers than you think.

Other global hashtags include #FIFAWWC and #myFIFAWWC when sharing how YOU are enjoying the game. All feeds will be on the stadium LED advertising screen at the tournament on game days, a FIFA first.

By using the official hashtag, #FIFAWWC, it will unlock a hashFLAG when using it on twitter. Fans will see a special ball image to celebrate the tournament. Also by hashtagging the 3 letter country code, you will unlock a flag image of the team you are supporting.

The U.S. Women’s team has their own campaign called #SheBelieves; where players surfaced messages from young fans Tweeting about what they aspire to be when they grow up. The team then Tweeted a video of the player reading off the fan Tweet and followed up with advice.

Also, from the Round of 16, in another FIFA first, the ‘FIFA Live Your Goals player of the match’ will answer a fan’s question at the post-game press conference, posted via Social Media. Join the converstation and get involved fellow soccerlocos!

Be sure to follow your favorite teams and players on twitter, here are the links to check out!