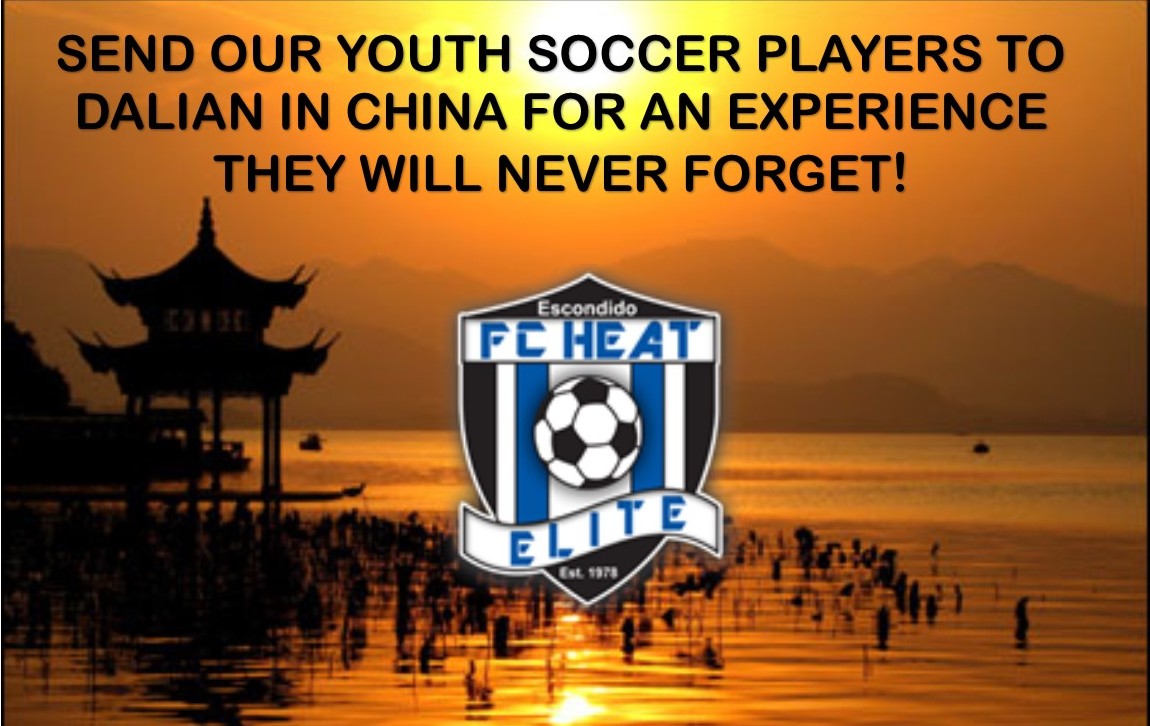 The story of how a youth soccer team from Escondido, California was granted an opportunity to travel to China to play soccer against Chinese youth soccer players began some time ago. Brazilian coach Roger Romin de Moura along with Steve Yorke, were coaching an Escondido Heat FC team containing 2 kids of Chinese descent, and were approached by their father Wei Zhang, and asked if they would be interested in coaching in China and taking their team there.

Mr. Zhang grew up in China and his younger brother used to play for the Chinese national team, so that’s where his passion for the sport come from. Coincidentally, Mr. Zhang is founder and chair of a non-profit organization called the Asian American Affairs Association (AAAA) that helps people from not only from Chinese decent but all Asian nationalities with any problems in the U.S., which is similar to the approach that Steve takes with the kids within the club.

Zhang and the coaches sat down to think about how they could get the club involved and take the team over to China. How could they make a cultural exchange experience for these young players into a one-in-a-lifetime opportunity?

The idea got bigger and bigger as they progressed and they decided to pick the city of Dalian, as Mr. Zhang had connections there. Since Dalian is informally known as the “Chinese Soccer City,” they thought about creating a relationship between Escondido and Dalian.

However, the kids who play for the FC Heat club are not wealthy and would not ordinarily be able to afford a trip to China, so they had to figure out how they were going to cover these expenses. Fortunately, Mr. Zhang decided to sponsor them under the AAAA. It took about 2 months to get the concept figured out, because this would cost thousands of dollars. They were able to do it because of the contacts Mr. Zhang had with politicians in Dalian. Mr. Zhang was able to convince the city to also offer to sponsor the trip. With Dalian’s sponsorship essentially 50% of the cost of the trip is paid for.

The kids in this U15 FC Heat team have been coached by Roger and have known each other for a long time,  playing competitively together for years.

Since the kids and their families are not able to pay for everything on this trip, Mr. Zhang was happy to utilize his resources to help provide funding. At the team meeting when the announcement was made to the children, Mr. Zhang revealed his motivations to the crowd.

[quote_box_center]“You as children will always remember this trip. And when you have your own children you will tell them about it and about the club that sent you there. You will always remember how hard your parents and coaches worked in order for you to have this chance. And it is my dream that you will do for another child what these people have done for you.” [/quote_box_center]

The FC Heat team will be taking part in a youth tournament in which they will play a minimum of three games. All of the games will be shown on a local TV channel in China. The matches will be held at the Dalian stadium, with press conferences, commentators, slow motion replays and everything that a soccer players dreams about. There was another team that was taken to Dalian last year from Seattle. They were not very strong team, did not represent American soccer very well. So this year FC Heat wants to change that image.

70% of professional soccer players in China originate from Dalian. Soccer in China has been growing in popularity in the past few years. In 2014, the Chinese president decided to make China a soccer country and therefore required all children to play soccer. The president, who is a big soccer fan, was embarrassed when China didn’t qualify for the 2014 World Cup. At one point the senior Chinese National Team even lost to the Thailand youth team by 5-1.

[quote_box_center]So in November, 2014 it was announced:

“Soccer would become a compulsory part of the national curriculum at schools.” Wang Dengfeng, an education official, said “improving the standard of football in China must start with children. By 2017 some 20,000 schools are to receive new football pitches and training facilities, with the aim of creating 100,000 new players. In 2016 football will become an option in the national university-entrance exam. This could help overcome resistance among parents to their children being distracted from their academic studies by ball-kicking.”[/quote_box_center]

This FC Heat team is planning on going in August of 2015 and are still looking for sponsors, as they have only 50% of the trip paid for. 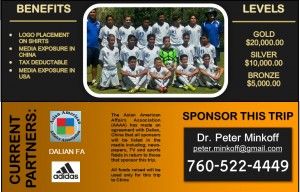