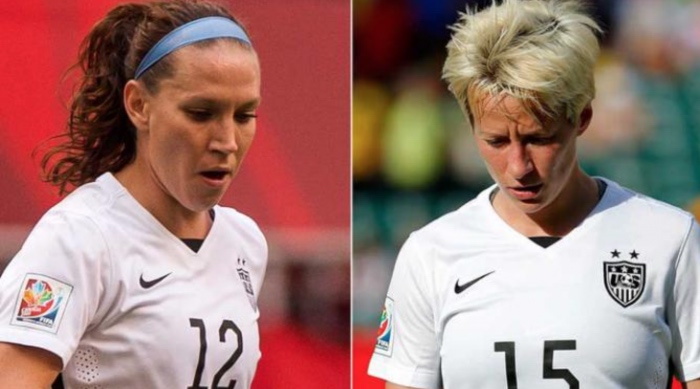 Who is going to replace Megan Rapinoe and Lauren Holiday?

The next match for the U.S. against China on Friday will be a very interesting one filled of tough decisions to make for coach Jill Ellis. Californian native and midfielder Megan Rapinoe and also midfielder Lauren Holiday received their second yellow cards of the tournament last game against Colombia and will be out of this quarterfinal against China. Both players are very important pieces in this squad. Rapinoe was crucial in every game the U.S. has played so far, either scoring goals or making assists; so her absence is definitely going to be a downside for the U.S.

Coach Ellis does have some very important decisions to make as to who will be replacing these two players and what formation she will be using against China.

The most natural substitution for Holiday would be Morgan Brian. Brian has been doing a great job, despite her young age of 22, when she has come on as a late sub. Additionally, playing alongside her in the midfield will be Carli Lloyd who is her teammate at Houston Dash, so they are very familiar playing with each other, guaranteeing the chemistry.

Rapinoe, on the other hand, will be a much trickier situation to decide, because of her creativity and importance on the way the U.S. squad and the way the team is structured. This will be a good way to see if the U.S. can still survive without relying it much on her to distribute the ball. Some of the options that Coach Ellis has are Heather O’Reilly, Lori Chalupny or Californian native Christen Press. Even though Press is not a naturally midfielder, her pace and technical ability can be great assets to do well out wide. 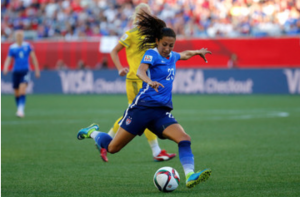 [quote_box_center]”I felt that Jill believes in me fully throughout my year with her as a coach — over a year now,” Press said the day before the Colombia match. “I think that what she wants from me is for me to play at my 100 percent. I haven’t done that yet. I don’t think I’ve ever done that on this team. And I think I’m still finding my way in a new position sometimes. I definitely think I’ve had good performances, and I’m proud of what I’ve done, but I haven’t hit my 100.”[/quote_box_center]

[quote_box_center]”I think that outside of this environment, I’ve had more integral roles in my team’s attack,” Press said before Colombia. “And I understand that at this level, when you get here, you start in a certain position and you have to earn the trust and the respect for a team to come to you and go to you to score goals in a pinch. I don’t know if I’ve necessarily taken all the steps to be that player on this team. I think that would be a big thing, just knowing that at all moments that the team trusted me to do that and that I trusted myself — and to be able to play with that confidence for 90 minutes.”[/quote_box_center]

Rapinoe is definitely the main playmaker for the U.S., however, having someone like Press in her place can give the U.S. a different look, and provide a more balanced team game.

We don’t expect any changes in the defensive side, as it seems to be working really well the way it is, with Julie Johnston and Becky Sauerbrunn considered the best defenders in the World Cup. Ali Krieger and Meghan Klingenberg have also done a great job at helping both offensively and defensively. 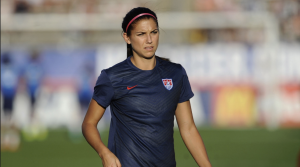 In regards to the attacking positions, we also don’t expect to see any major changes. As Californian native Alex Morgan continues to get more and more minutes, playing for the entire 90 minutes last game, she is is getting her rhythm back again. Morgan did a great job last Monday against Colombia, as this was her best performance in this tournament so far. She was very dangerous and showed she is fit.

As far as who is going to be partnering with Morgan, we are still not sure. Abby Wambach would ordinarily be the first choice because of her height and ability to head the ball, as these would be good traits to use against China since they are a relatively short team. However after some mistakes and frustrations last game, it wouldn’t be surprising if she doesn’t start. Coach Ellis could also use Sydney Leroux, or move Press up top and put also Californian Amy Rodriguez to play wing.

As Press commented, she knows what’s missing from the U.S attackers:

[quote_box_center] “We’re kind of in a rigid formation with no natural angles. And I think we’re working so hard to do what our coaches want and get the tactics right that we lost a little bit of that spirit of the game where you can just run where you want and do what you want. That kind of chemistry that’s built on your instincts and your freedom is what’s missing from our attack right now.” – Christen Press on the U.S. women [/quote_box_center]

Time will tell who Coach Ellis decides to start the match but it is good to know that the U.S. has depth within the squad and has some ready-made replacements for their first choice players.