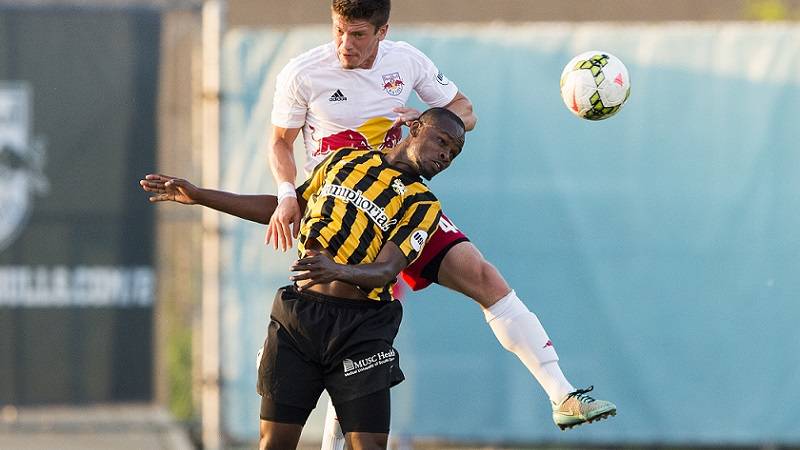 Dane Kelly Earns the Honor of Player of the Round

Dane Kelly, the Charleston Battery forward, was awarded the recognition of Player of the Round by TheCup.us for his performance in the third round of the 2015 Lamar Hunt U.S. Open Cup.  With grace like quicksilver, he was able to put the Battery in the lead against the Fort Lauderdale Strikers from his one-goal, one-assist plays. His speed left Fort Lauderdale in the dust and really took over in the second half as fatigue set in on both sides.  Kelly made a critical cross to Zach Prince to tie up the game, just 3 minutes later, in the 80th minute, Kelly scored to complete a 3-2 comeback.   Kelly remarks after his nail-biting game, “For me, I think it’s the best game I’ve had for this year so far.”

Scoring in the last five Open Cup tournaments, Kelly put his name on the record.  His game winning goal also earned him another honor of tying for the Most Consecutive Tournaments Scoring a Goal.  The record is also held by Nicki Paterson, a former Battery teammate, and former Harrisburg midfielder J.T. Noone.  Kelly is the only player on that streak who is still actively in his soccer career.

Though Kelly played very well, he was only a few votes ahead of his fellow Jamaican countryman, Asani Samuels.  Samuels scored twice and assisted a third goal in overtime after coming off the bench in the Rochester Rhinos vs. Harrisburg City Islanders game.  The Rhinos were led to a 3-1 victory.

Kelly’s next opportunity for another award is June 17th when Charleston hosts MLS newcomers Orlando City at Blackbaud Stadium.  He is one goal away from breaking the Charleston team record, currently held by Paul Conway.  Mark your calendars for next week’s momentous game!