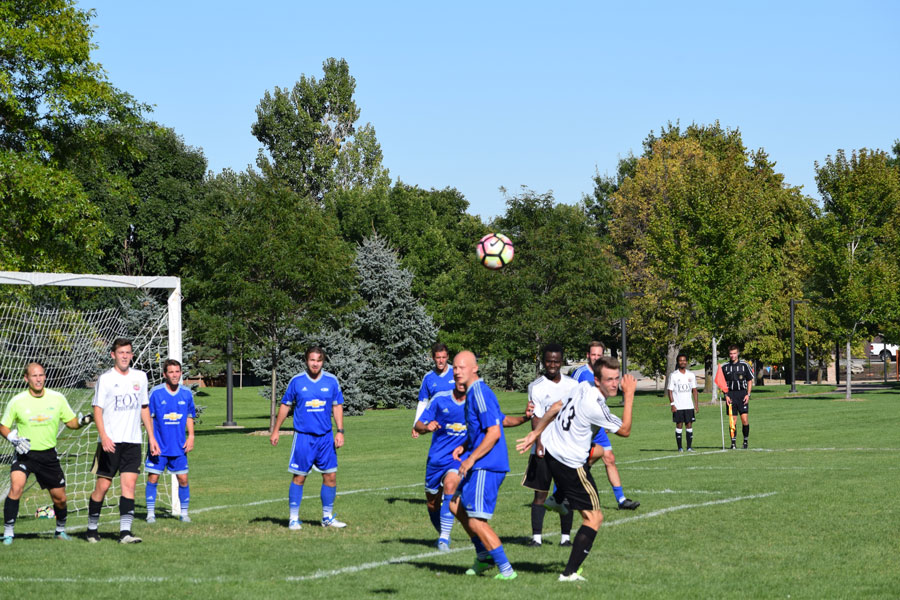 In the UPSL Colorado conference, the Colorado Rush came into this match with a record of 1-0-1 sitting near the top of the league, where the Logrones are 0-2-1 and are sitting towards the bottom of the conference. This was the first time these clubs have faced each other in the UPSL conference, and despite their apparent inequities going into the match, both teams emerged deadlocked at 2-2 after 90 minutes.

Right from the opening kick off, the Rush looked to be in complete control of the match moving the ball smoothly and keeping possession in their attacking half. There were some early shots that were stopped by the Logrones keeper, but the first real test was a shot in the 23rd minute by Ben Gaido from forty yards out that nearly snuck into the top of the goal. Colin Clark and Jimmy Fitzpatrick did an excellent job controlling the midfield which gave Logrones a good bit of trouble in the first half.

In the 39th minute of the first half, Jimmy Fitzpatrick made way for Andrew White to come on. There were numerous yellow cards being tossed out this game as three were given to Logrones players in the first half. In the 44th minute Ben Gaido, a main offensive target for the Rush, was chasing a pass down the touch line when he pulled up with an injury and would sit the rest of the match. At the half the score remained tied at zero.

The Rush came out firing again in the second half and applied substantial pressure on the Logrones defense. In the 64th minute Rush forward Jack O’Brien scored their first goal off of a throw in that made its way to the back post for an easy finish. In the 68th minute a second yellow card was given to Logrones #11 who had to play with ten men for the rest of the match. Not long after the first goal, the first half substitute Andrew White was pulled down in the penalty box in the 70th minute. Colin Clark stepped up and placed the penalty kick into the back of the net to make it 2-0 Rush.

Despite only having ten field players, Logrones SC were able to put some late pressure on the Rush defense and in the 79th minute of play, Logrones #4 sent an outstanding shot from thirty yards out that beat Rush goal keeper Shailer Thomas in the upper left corner of the goal.

Peter May and the rest of the Rush defense kept the Logrones offense at bay for a good portion of the last eleven minutes of the match. However, with two minutes remaining in regulation, Logrones SC got behind the Rush defense and buried a last ditch effort goal to tie the match 2-2 which is how the game would finish.

Despite a dominating performance by the Colorado Rush and being up a man for a good part of the second half, they only came out with a tie in the end. The Rush did have some key pieces back defensively for this game which helped them out but now they will have to see how serious Ben Gaido’s injury is, and if they will need someone to step up while he gets healthy.

After the match, Logrones owner commented on the game, “That was a great match, both teams are really fun to watch play.”

The Colorado Rush now move to 1-0-2 for the season and are currently sit in second place in the Colorado UPSL conference. Their next match is away facing Indios Denver FC on Sunday April 2nd at 3:45pm.