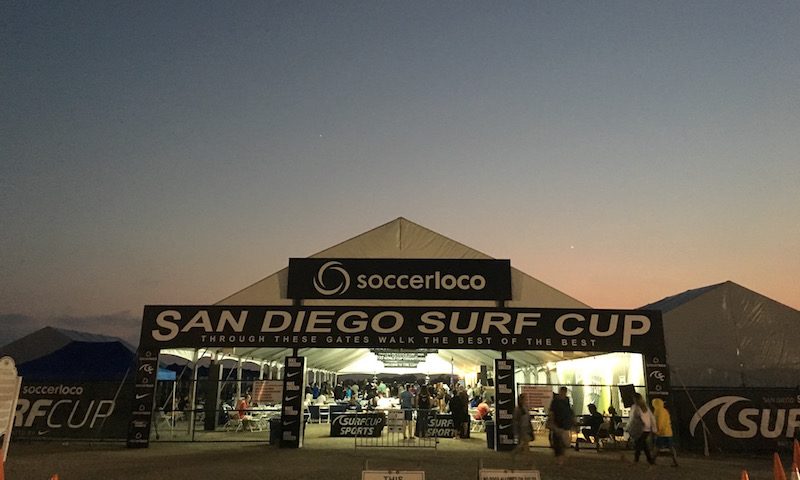 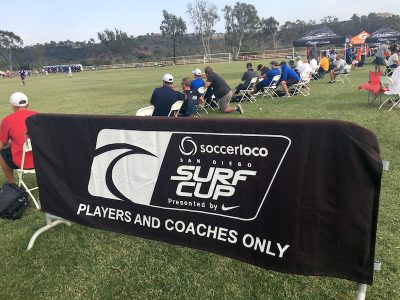 Every July, college coaches from across the country descend upon San Diego to recruit from “The Best of the Best” at the soccerloco Surf Cup. This year, the girls’ event was held at the SoCal Sports Complex in Oceanside, and the boys’ played their group-round games at the Del Mar Polo Fields.

Dozens of college coaches observed the players along every sideline. In recent weeks, players had been emailing their game schedules to coaches. Most coaches had a list of specific players they were there to observe, but they also left time and room in their notebooks for players they hadn’t yet considered. 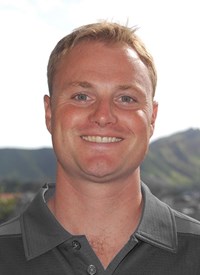 One such coach is Zach Kingsley, a University of Washington & Colorado Rapids alum, and now the men’s head coach at the up-and-coming Dominican University.

Dominican, a short drive north of the Golden Gate Bridge in San Rafael, CA, plays in the NCAA D2 PacWest Conference. On Saturday of Surf Cup, Coach Kingsley said, “Surf Cup is definitely the premier college recruiting event on the West coast and one of the top recruiting events in the country every year. The quality of play is high. It’s exactly what college coaches want to see. Every game is played at a very high level.

It’s also a great place for networking with other coaches that we don’t get to see very often. Surf Cup is very welcoming. They set up comfortable areas where coaches can recharge and talk between games. It would be great if they would waive the parking charge for college coaches, but maybe next year.

It’s great that they have age groups together on nearby fields, so I don’t have to walk long distances between fields to see players in the same graduation year.” Speaking of looking for players, Coach Kingsley explained that he was mainly watching players for his 2017 recruiting class: “I’m mainly looking at 2017 kids, the boys who are going into their senior year of high school. If I have time, I may go see a game or two with 2018 boys, but mostly I’m looking at 2017. That’s pretty normal for D2 schools. D1 schools look at much younger players, so they’ll be spending more time at the younger games, but most D2 coaches I know are looking at 2017 grads.”

When asked if he was looking at players who had contacted him, Coach Kingsley replied, “I have a list of players I’m watching. A few have already come to our campus, and I want to see them playing with their own team against strong competition. But I’m also looking for any impressive player that I feel can benefit our program at Dominican. I look for speed, strength, technical ability, effort, and players that make an impact on the game on and off the ball.

I usually have in mind what I’m looking for, but I don’t just narrow my search to the specific needs I’m looking to fill. I am bringing in my first recruiting class this fall, and as I continue to bring in more players every year, I want to develop a team for Dominican that can create a good mix of possession-based soccer and dynamic counter-attacks out of the back. I want to build a roster that can defend ‘box to box’ and switch the play very quickly. That will require recruiting players with high technical ability and extraordinary athleticism, so that’s what I’m looking for here at Surf Cup.” 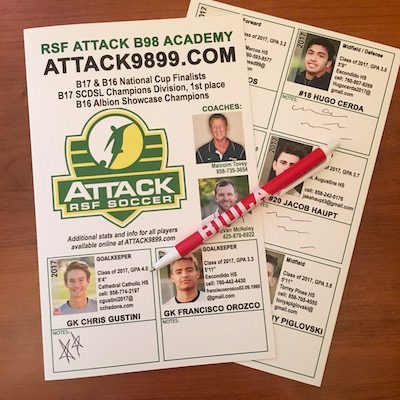 ScoutingZone is the web-based college recruiting tool used by Surf Cup to get rosters and player info into coaches’ hands via their smartphones, tables, and these laptops. When asked if he was using Scouting Zone, Coach Kingsley remarked that he prefers paper rosters. “This year, Surf Cup didn’t provide paper rosters, and I would have liked to have that from the tournament. Thankfully, many teams had created their own recruiting flyers, but having both the online information and the paper rosters would have been great. Many of my fellow coaches here have also said that they were hoping to have the rosters provided by the tournament. Scouting Zone is great concept, but I prefer a paper roster that I can use to take notes and easily reference while on the sideline without having to fumble with my phone. The best team rosters I’ve gotten have a picture for every player, grad year, GPA, height, position, contact info, and extra space for note-taking.” 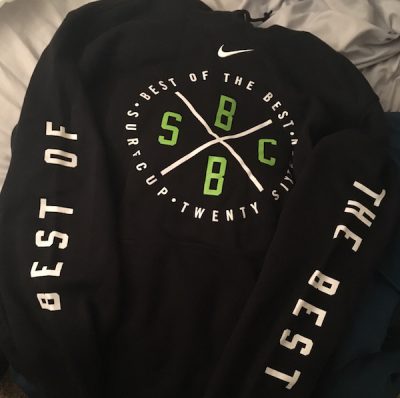 At the end of the day, after the Soccerloco Surf Cup store had closed and the food vendors had packed up their booths, players and coaches made their way to the parking lot and then off to a meal and a comfortable bed after a long day of SoCal soccer. Coach Kingsley and his college soccer peers will return on Sunday to take in more soccer and to look for their next great recruits.

Newer Post
Looking Back on July
Older Post
Ahead of Week 3’s Match Against Chivas, Defensive Problems Continue for Xolos