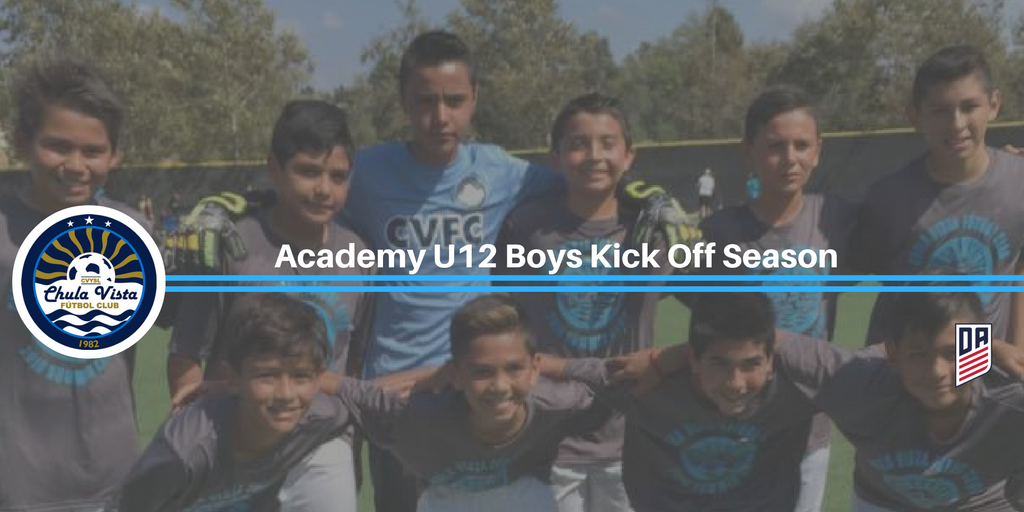 0 SN Guest Sep 6, 2016 12:55 pm
Over Labor Day Weekend, Chula Vista Futbol Club kicked off league play in the United States Soccer Development Academy (USSDA) for their two U12 teams with a pair of matches against Strikers FC from Orange County on Saturday. These matches were firsts of their kind for CVFC and South San Diego. In June of this year, Chula Vista Futbol Club was honored with the USSDA distinction and began preparations for their fall season.
Under cloudy skies, the first U12 squad started the action early by scoring its first goal in the 8th minute.  Forward Rigoberto Arrellano charged up the right sideline past a couple Striker defenders. He crossed the ball into the box to strike partner Jesus Sanchez. Sanchez was one-on-one with the goalie after a fancy sequence to get past the last Strikers defender and placed his shot into the back of the net.
CVFC maintained possession and put pressure on the Strikers defense as they looked to go up another goal before the half. Midfielder Gabriel Enriquez sped past two Strikers but missed the target by just a few inches. Support from the sidelines was boisterous as the second squad and their families arrived and began to set up on the freshly cut grass.
At halftime, the score remained 1-0, CVFC’s squad looked to be in control. Coach Matt Emmert made little changes and continued to encourage the boys to play aggressively. In the 43rd minute, a goal from Gabriel Enriquez put the boys from Chula Vista up by two goals. CVFC seemed to have the match in their hands but then something clicked for the Strikers.
A few moments after the 2nd Chula Vista goal, Strikers forwards put the pressure on the Chula Vista back line and eventually scored their first goal. Within 5 minutes, the team from Orange County scored an additional two goals to take the lead.
Chula Vista did not have much time to tie it up and none of their sequences were advancing the ball into the Strikers end of the field, and the score finished 3-2 in favor of Strikers.
Having watched the other squad lose in that fashion, the 2nd U-12 squad were keen to learn from what they witnessed and remain competitive for the full 60-minute match. The boys were up to the task however, and goalkeeper Rafael Torres kept a clean sheet. Chula Vista FC coaches encouraged the players from the sideline as they made two early roster switches. Despite the Strikers offensive sequences, Torres stopped all goal attempts and encouraged his teammates to continue to apply pressure.
The score remained the same through to the final whistle and coaches were pleased with the day’s outcome.
“We are in the academy now, we can make adjustments and try things out as we train and play matches,” Director of Coaching Hector Diaz. “We believe we can finish among the top teams in our league and we have to go and review the game film and figure out where we need to improve the most.”

The teams traveled to San Juan Capistrano on Sunday to compete against West Coast FC in two additional matches. Chula Vista mirrored Saturday’s second match’s score with a 0-0 tie. in the first vs. West Coast FC. The second match was unique from any of the other matches as they won the game decisively 5-0.

Chula Vista’s next home game is September 24 versus the San Diego Nomads at Orange Park. CVFC would like to invite everyone in the South Bay, especially in the city of Chula Vista, to come out and support as they look to get their first victory in the South Bay for an Academy team. Check out Chula Vista FC’s Facebook for more information.

Newer Post
Aztecs Win Home Opener Over No. 1 Akron
Older Post
Educating Parents Should be the Goal of every Director of Coaching