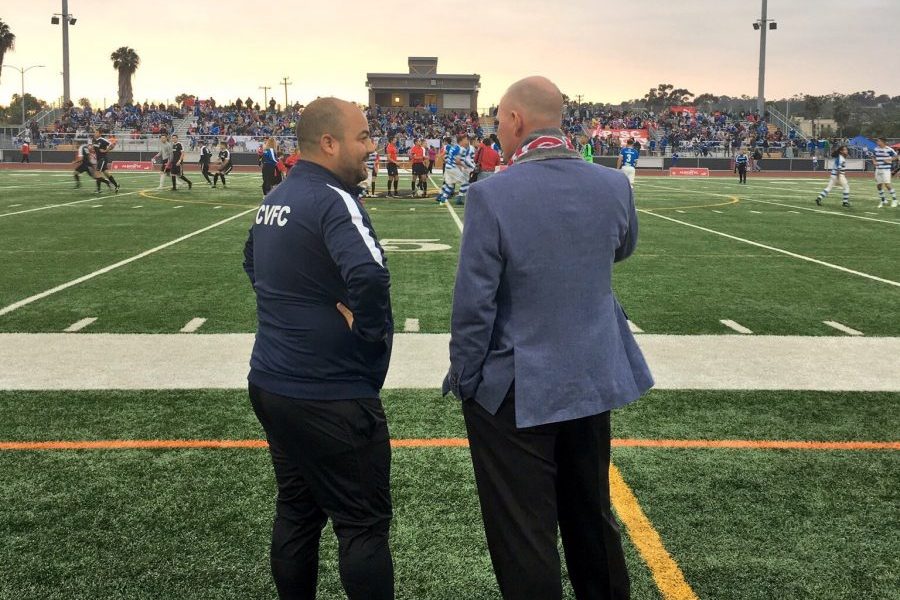 Hector Diaz believes in the city of Chula Vista. He is also a firm believer in the power of family.

As the Director of Soccer Operations and the Head Coach of the successful and rather unique U-23 squad at Chula Vista FC, Diaz has found a true purpose in life that encompasses so much of the community he holds dear.

A veteran of the United States Air Force and a lifelong student of the game of soccer, Diaz sat down with SoccerNation to discuss the current happenings of Chula Vista FC, including the club’s recent run in the U.S. Open Cup that featured a memorable win over San Diego’s Albion Pros, and their upcoming campaign in the So Cal Premier League.

In an engaging three-part interview, we get to learn about the history of Chula Vista FC. Spotlighted is the club’s commitment to the local population and its long-term vision in the South Bay, as well as some of the challenges the club faces.

Enjoy a great look into the young and motivated soccer mind of Hector Diaz. Here’s Part 1 of the conversation in our latest SoccerNation Sitdown.

Nate Abaurrea (SoccerNation): “Coach, thanks for joining us.”

Nate Abaurrea (SoccerNation): “Well, we’ve got a lot to get to, so let’s start by going back in time a bit. Tell us how you first got involved with Chula Vista FC?”

Hector Diaz (Chula Vista FC): “There’s definitely some good background stories here. For me, it starts back around 2010. I used to be involved with another local club here in Chula Vista, the Aztecs, a well-known team in the South Bay. It’s actually where a lot of us who are now deeply involved with Chula Vista FC got our start as players and coaches, getting our feet wet so to speak.

I coached the 93/94 age group team. That team was really good, and just had this great connection. We won four State Cups, made it to several different finals, won Surf Cup, and even sent five players to the U.S. Youth National Teams. That 93/94 group really opened the doors of soccer for so many of us, helping us to make some really valuable connections.

All the while, there was this other local team that wanted to scrimmage us. They were this team called Chula Vista FC. We’d never heard of this team, but some of our players knew some of their players from school, and our guys kept telling us those kids were talking all kinds of smack, all in good fun of course. Our kids were obviously talking smack right back. A few weeks went by, and I just kept hearing the word “scrimmage” over and over again. Everyone wanted to scrimmage. Everyone wanted to have a go. I was the one that kept saying no. It’s one of those situations you’ve got to be careful with as a coach, because you don’t know how it’s really gonna benefit anyone. Finally, after weeks and weeks of my players begging me, I said yes to the scrimmage.

I’ll never forget that day we scrimmaged them, Aztecs and CVFC. This little team we thought we were much better than tied us 2-2. Our players were impressed. I was impressed.

The Club President of Chula Vista FC at that time, Hugo Molina, came up to me after that scrimmage and said that he would love for me to come over to their club and help them to develop a true academy style system to help them compete at the more elite levels of soccer. I accepted the offer while continuing on for a while with Aztecs, and I soon realized that this “little” team was actually part of a very big club as far as sheer numbers went. But it was all very recreational and family oriented. I really liked the family aspect, and I’m a big supporter of soccer on a recreational level, but I saw that better organization was clearly needed within the club.

For me, the CVFC gig honestly started as a hobby, but it just grew and grew. We got a quality structure in place. We got the U.S. Soccer Academy involved. We launched the first U-23 team in 2011, what we like to call the first-team now. We’ve evolved into a club with a lot of pride and a lot of heart.

I’m always grateful for what Aztecs offered me. My father, my cousin, and really our entire Diaz family was part of Aztecs in one way or another. When I made the decision to come over to CVFC, some of my friends and family followed, and they were all interested in the same things I was, helping CVFC to become a strong organization at all levels.

Nobody plays up at this club. Development is key, and it comes with natural growth for the individual and for the club itself. I love every bit of my work with this club.

Looking back, it was that family oriented mindset that I saw which really drew me in, and I wanted to bring that together with a true soccer intelligence. What we have created here is the best of both worlds, and we are trying to improve upon that every day.”

Nate Abaurrea (SoccerNation): “Now the history of Chula Vista FC goes all the way back to the early 1980’s, and includes a variety of titles and monikers.”

The whole thing, when I think about it now, seems like kind of a blessing in disguise. This club has its rightful name now. This club should be called nothing other than Chula Vista FC. We’re immensely proud of our history, going all the way back to 1982, and in honor of that history, this is what the club should be known as.”

Nate Abaurrea (SoccerNation): “It seems like a lot of clubs these days are actually hesitant to use a given city or town in their name. Your club is obviously on the other end of the spectrum in this regard. Talk about why that is.”

Hector Diaz (Chula Vista FC): “Chula Vista FC is our name, and there’s just such a strong meaning in that name. I feel like so many clubs want to drop their city name so they have the ability to spread regionally, nationally, etc. They’ll use a mascot type name to keep things safe in that regard. That’s not us. Our focus is our city. We want to merge the city of Chula Vista with the overall growth of American Soccer. We want to intertwine the Latino demographic in our community with the American soccer culture. We want to get players on the U.S. National Team. We want to embrace the diversity that makes America special.

Our amazing Board of Directors includes Mexican-Americans, Italian-Americans, Afghani-Americans, and more. Diversity is key in all that we do, but the fact of the matter is that about 80% of the South Bay’s population is Latino. We need to spread awareness within our Hispanic community, letting people know that this club is here to serve them, to serve their children and help give them a real sense of purpose and motivation with the game of soccer. As a first generation Latino myself, and as someone who served in the US Air Force, I can really see this club bringing it all together. We want to see more Hispanic players on the U.S. National Team. That’s a huge focus for us. You could definitely call it a goal for Chula Vista FC.