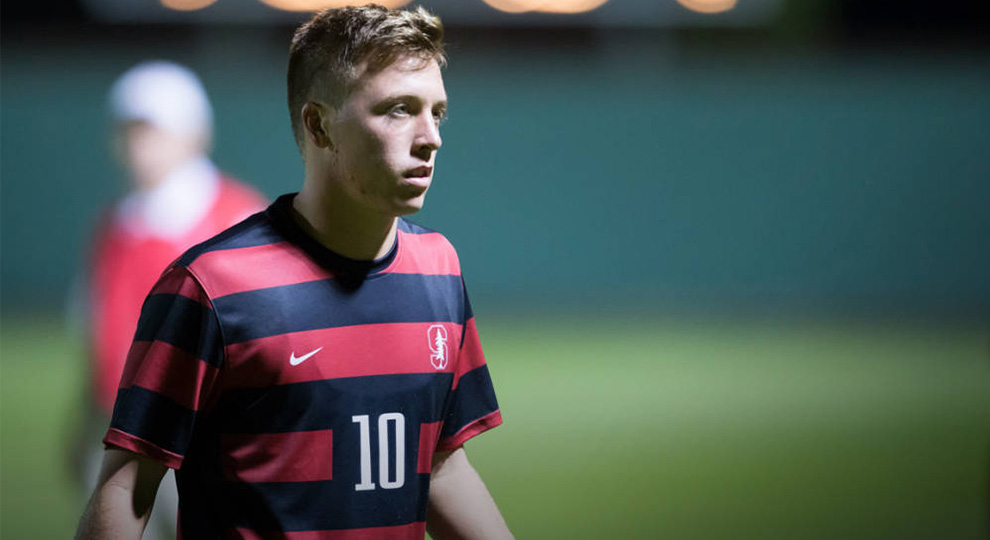 From now and until the conclusion of the 2015 college season, Soccer Nation will provide weekly college soccer coverage for both the men's and women's

From now and until the conclusion of the 2015 college season, Soccer Nation will provide weekly college soccer coverage for both the men’s and women’s teams.

Stanford’s first home match of the season on Friday was a scoreless draw against Washington, which snapped the Cardinal’s eight-game winning streak. They recovered Saturday with a 3-0 victory against #16 Oregon State. The goals came from freshman Amir Bashti, his first collegiate goal, senior Brandon Vincent and sophomore Foster Langsdorf. Stanford out-shot Washington and Oregon State 48-16 over the course of the weekend.

The Gauchos had a split week, defeating Cal State Fullerton 2-1 at home on Saturday and falling at Sacramento State 5-2 on Wednesday.

Saturday night was exhausting for both the Gauchos and Titans as they fought into double overtime. The winning goal was scored in the 103rd minute by junior Nick DePuy, reigning National Player of the Week. This was DePuy’s fourth consecutive match in which he scored the winning goal. It was a different story at Sacramento State, as the Gauchos put up a worthy fight but could not outscore the Hornets.

This Saturday, UC Santa Barbara travels to Cal Poly (7-3-3) at 7 p.m. to resume the Blue-Green rivalry.

The No. 7 Toros are having their best season since 2009, remaining undefeated in California Collegiate Athletic Association (CCAA) play. On Friday, freshman Joey Chica and junior Tony Alfaro were the game scorers in CSUDH’s 2-1 win over Chico State at home. The victory also gave the Toros enough points to jump over Cal State San Bernardino for 1st place in the CCAA standings.

Stanford kept both Oregon State and Oregon scoreless to continue its undefeated streak. On Thursday, the Cardinal set the pace with a goal in the second minute by freshman Tegan McGrady and continued to dominate for a 3-0 victory over the Beavers. Sunday was more of a challenge for Stanford, who fought for 74 minutes to find the one goal that mattered, scored by sophomore Andi Sullivan, team leader in goals scored. The Cardinal survived the Ducks 1-0.

California also hosted Oregon and Oregon State over the weekend and walked away with two victories. Junior Arielle Ship banked two goals and an assist Friday night to total 10 goals for the season and help Cal to a 3-2 win over Oregon. On Sunday against Oregon State, Cal kept its home unbeaten streak alive with a 1-0 win. Ship assisted senior Samantha Witteman for the game-winning goal and sophomore goalkeeper Emily Boyd recorded her seventh shutout on the season.

Thursday’s 1-0 victory over Santa Clara kept Cal undefeated at home. Next the Bears host Utah (5-6-3) Sunday at 11 a.m., which can be viewed on Pac-12 Networks.

Santa Clara has had a long week, finishing with two double-overtime wins against Loyola Marymount and Pepperdine, and falling to California on Thursday. LMU put up a fight that the Broncos fed off of to rally for a thrilling 2-1 win. Santa Clara finished Sunday with a 1-0 victory over Pepperdine. Sophomore Mariana Galvan was the hero both matches, scoring both double-overtime goals to rack up three for the season.

On Thursday, the Broncos took on No. 23 California. Senior goalkeeper Andi Tostanoski picked up five impressive saves to keep the game scoreless, but California’s game-winning goal by Witteman in the 62nd minute was near unstoppable.

Santa Clara will travel on Sunday to take on West Coast Conference rival Portland (6-8-0) at 1 p.m., which can be viewed on ESPNU.