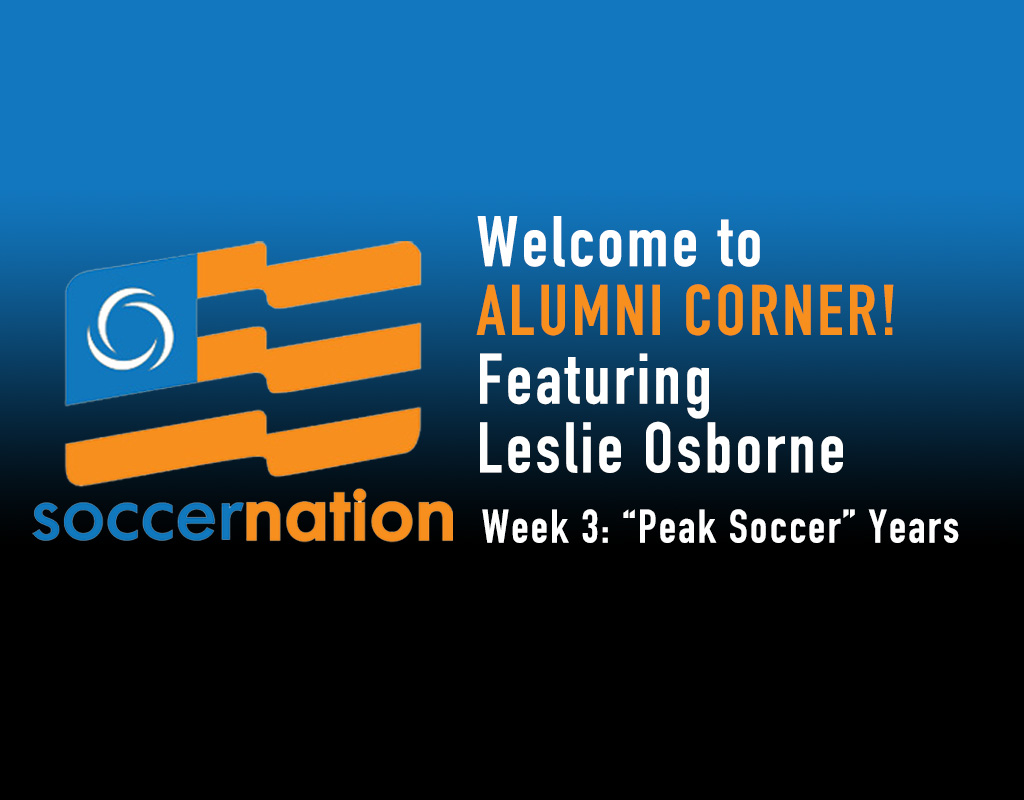 Welcome to Week three of Alumni Corner! In Week One, we met Leslie Osborne and learned all about her youth soccer years in Wisconsin.

In Week Two, we ventured through her high school years. ODP, Youth National Teams, College Recruiting. All of that led to where we are now: Week 3 and “Peak Soccer.”

Leslie headed off to Santa Clara University and hit the ground running. She had recently won the U19 World Cup with the US Youth National Team. And the victories kept coming.

She became an NCAA Division 1 champion her freshman year at Santa Clara. The 2001 NCAA Championship game was the 20th ever NCAA Women’s Soccer Championship. North Carolina had won 16 championships so far. The Broncos of Santa Clara defeated North Carolina 1-0 and even earned shoutouts in the movie, “Bend it Like Beckham.”

Leslie told me, “It was amazing. It was that year that got me called to the full national team. At nineteen years old.” I asked Leslie what she thinks caught the eye of the national team coach for a senior team call-up.

“Play with both feet”

“It was the same as my youth soccer year. I could play well with both feet. I was versatile. That’s still my number one advice to any young player. Play with both feet. I could play anywhere. Defense. Mid. Up top. Left. Right. It helped me a lot. I got more playing time that way. I’m not going to lie, though, it did hurt me a little bit. Being that kind of versatile player is great. But I was also not a super star standout at any one position. That hurt me a bit, I think. But being left- and right-footed and versatile helped me more than it hurt me. For sure.”

As Leslie’s college years marched on, and her time with the senior team continued, she was a strong contender for the 2004 Olympic Team. She was, however, cut from the senior team in the lead up to the Olympics in Athens. The USA went on to win gold, beating Brazil 2-1. Leslie committed herself to making the next Olympic and World Cup team.

? ?? This pic was taken during my last college game ever ⚽️Little did I know that I would end up having a major reconstruction ankle surgery a week later, signing my first @puma deal and eventually going on to play 10 years professionally. So grateful ? Can’t believe it’s been 15 years ? I’m heading to senior day tomorrow to support my @scuwomenssoccer and can’t stop thinking about all my amazing memories, teammates, coaches and most importantly life lessons❤️? #flashbackfriday PS- my legs! ?

She told me, “I had met Julie Foudy when I was fourteen. Julie was my idol, and she was on that Olympic team. She was the captain, in fact. She was a kick ass soccer player. And she was such a nice person. That’s who I wanted to be like, for sure.”

“I was part of the American Women’s World Cup team in 2007. It was a dream come true. The tournament was in China.”

The next step for Leslie was to make the 2008 Olympic team for the games in Beijing. “I was so ready. But I tore my ACL. It was horrible timing, but what can you do? I sat through the Olympics, injured, along with Abby Wombach.”

No 2008 Olympics for Leslie and Abby

I said, “Oh, I remember that! She got hurt in San Diego. Brazil broke her leg at USD.”

Leslie answered, “That’s right! That game was in San Diego. It was a send-off for the Olympics, and we had beaten Brazil in the last Olympics final. Yeah, they took her out at that game. It was nasty. Both of us had to sit through the Olympics, injured.”

Come back next week for Week Four of Alumni Corner. Leslie stopped playing professionally in 2014, but her career was just taking flight. #NARPLife has been good to her, and it’s still going strong.

all images courtesy of Leslie Osbourne. (Thank you, Leslie.)