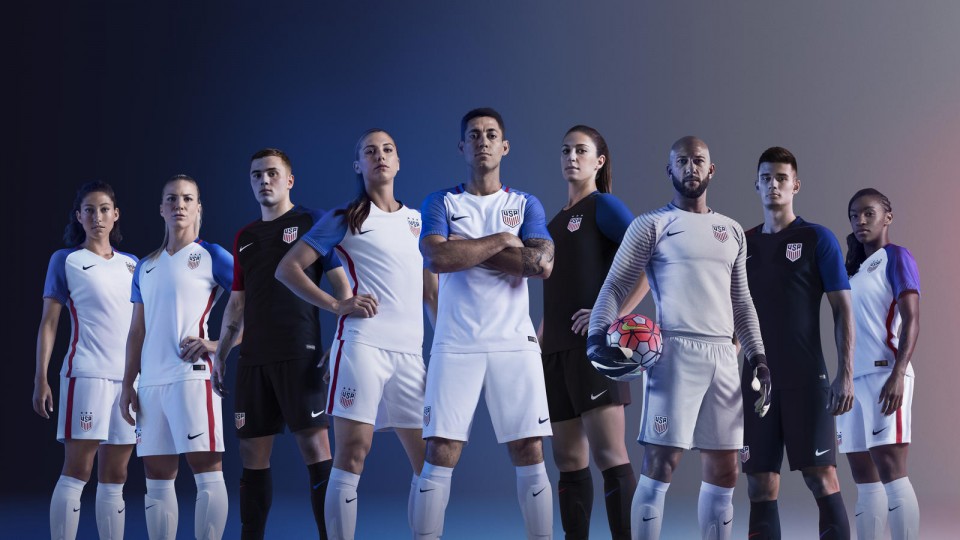 The United States Women’s and Men’s National Team home and away kits have been unveiled ahead of a summer jam-packed with soccer. The U.S. Men’s National team hosts the 2016 Copa America Centenario and the Women’s National Team travels to Rio De Janeiro, Brazil to defend their Olympic gold medal, which they earned at the 2012 London Games.

Featuring the brand new Nike AeroSwift technology, the kits are lighter, stronger, and more flexible than ever before. The new 2016 kits feature U.S. Soccer’s new crest, a variation of the fan favorite centennial crest from 2013 which includes a modernized shield with “USA”  emblazoned above a field of red and white vertical stripes.

The new men’s home shirt features a classic white torso with blue colored sleeves. The chest has been engineered with specific knitted zones to create a geometric pattern to enhance fit for the wearer with additional mesh shapes at the bottom of the graphic. The United States Men’s National team will have black as the predominant color on their away kit for the first time. The sleek body and contrasting red and blue arms make for a striking visage.

The women’s shirt also features a modern white V-neck collar with a red trim at the back. The three stars representing three World Cup Championships adorn the women’s kits above the crest on the left chest and above the hem on the right leg.

The new men’s and women’s kits will be worn for the first time on March 25 when the United States Men’s National Team travels to Guatemala in World Cup Qualifying. The Women’s National Team are set to debut their new kit on April 6 in a friendly match against Colombia.