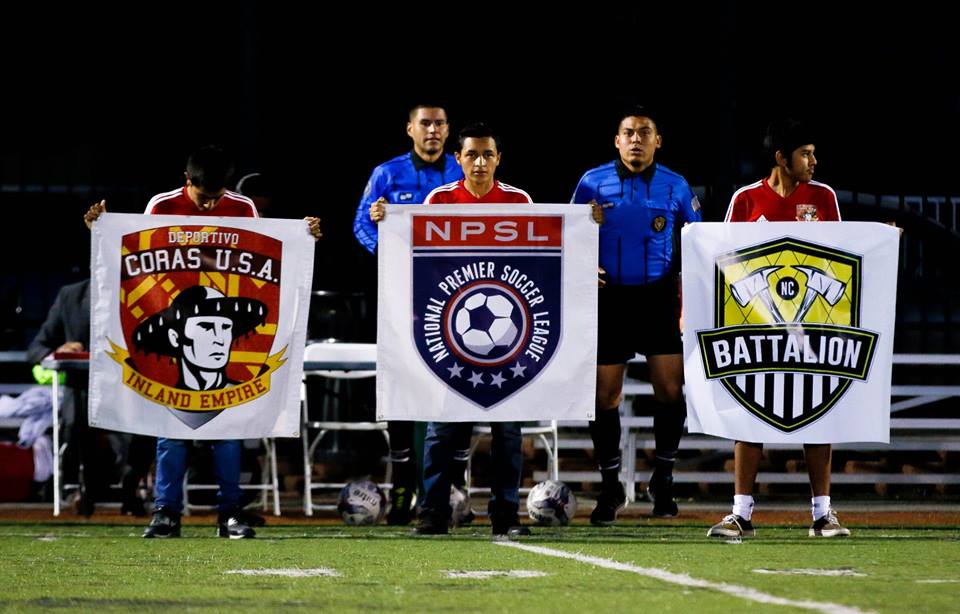 Redemption and Mirrors: The Strange Tale of Battalion vs. Coras

All aboard the NPSL Southwest Delorean! We are doing some time hopping. You ready? Ok. Let’s go.

The date is April 24th, 2016. It’s a Sunday night in Riverside, California. The North County Battalion have embarked on a northbound journey from San Diego, and are due to take on Deportivo Coras in their fourth match of the NPSL regular season. The Battalion are coming off a gut wrenching 3-1 loss at home to their inner-city rivals Albion Pros, (their first dropped points of their competitive existence in this, their inaugural season) and are anxious to get that sour taste out of their mouths. They’ve got a new goalkeeper, James Stroud, fresh back from injury after missing the first three games.

The match kicks off under the floodlights of Bobby Bonds Park. It is a tight, tense, cagey, and extremely physical affair. The first half sees Coras with the few meaningful chances, each time thwarted by the 6 foot 3 inch netminder, affectionately referred to as “Stroudinho”. At the other end of the field, Coras goalkeeper Alonso Lara is not too busy, though the Guillermo Ochoa lookalike occasionally has a chance to show Stroud that he too can play quite well with his feet.

The first half ends scoreless. One player has looked particularly special for Coras. His name is Fernando Cabello, and he has shut down just about any attacking threat from the visitors. Standing 6’2 and possessing outstanding vertical leaping ability, Cabello is making it abundantly clear that the Battalion were not to get anything easy through the air, and he’s no slouch in any other defensive area.

The second half starts with more of the same, stiff challenges, a few shoving matches, and a couple of set piece opportunities. One such opportunity comes to the Battalion, just a few minutes after the restart. The ball is on the ground, about 35 yards from goal, just off the right attacking sideline. Nelson Pizarro whips in a menacing service, and after a slight flick from Battalion winger Blake Milton, it’s Cabello in the most precarious position, inside his own six yard box, facing his own goal and needing to make a crucial defensive intervention. It all goes miserably wrong for the Coras defender, as he slams the ball past a helpless Lara and into the roof of his own net. It’s 1-0 Battalion. The boys from SD look poised to take three valuable points on the road.

The tight footballing tussle continues, all the way to the 88th minute, when Coras have a free-kick at the halfway line. A long, floating ball is sent into the box, and that sphere of glorious cruelty proceeds to do a pinball act, ricocheting off a half-dozen bodies before it’s blasted by a Coras player toward goal. Standing between that shot and James Stroud is Battalion center-back Justin Picou. The ball seemingly goes off the shoulder of Picou, but the whistle blows. It’s a penalty for Coras. Picou, Stroud, and the Battalion bench can’t believe it. Shane Shelton steps up for Coras and slots it home for the hosts, as the ball brushes off the fingertips of Stroud before piercing the side netting, leveling the score at 1 apiece. That’s the way it ends. Stroud takes the Man of the Match honors, but Coras take away two points from the visitors.

Alright. Let’s hop back into the Delorean. We’re going back to… well, you know where we’re going.

The date is June 29th, 2016. It’s a breezy Wednesday evening in San Diego, a gorgeous setting for the final regular season match of the NPSL Southwest Conference schedule. It’s the rematch between the Battalion and Coras, and there’s one rather important thing on the line. With the way the points worked out through eleven games, it’s the Battalion in second place on 23, and Coras in third on 22. The second place side will host the third place side in the first round of the playoffs. The two sides are in a peculiar situation, guaranteed to play one another in back to back games. The location of that playoff affair… still unknown. A win for Coras, and the playoff game will be in Riverside. Anything but a loss for the Battalion, and it will be held in San Diego.

The match kicks off beneath a majestic sky, as scattered hot air balloons drift into the orange and purple haze hanging over the Pacific Ocean and the surrounding coastline. The first half is almost a mirror image of the April 24th encounter, tight, tense, physical, cagey, no sustained possession for either side, and the few half chances falling to Coras, Stroud in prime position to gobble up each and every one. Fernando Cabello has been the best player on the pitch, the Coras center-back exhibiting a mental fortitude and physical dominance that would make any coach happy, apart, of course, from Ryan Guy in this case.

The darkness of night falls over Del Norte Stadium, as the lights take their full effect. The two teams depart from the dressing rooms and return to the pitch. The second half kicks off, and it’s more of the same. If the result holds at 0-0, it will suit the Battalion just fine.

It’s the 57th minute. Coras have a set piece, about 35 yards from goal, just off the right attacking touchline. The first ball is half-cleared, before a shot is blasted low and hard to the far post by Edgar Llamas. The shot is hooked, and is destined to go a few yards wide of the Battalion goal. Positioned just inside the top corner of the six yard box – barely onside,  this time facing the opposition goal – is none other than Fernando Cabello. With a strong lunge, an eerily similar motion to the play over two months prior (which lead to Cabello putting one in his own net), the Coras defender gets on the end of the low drive, and smashes it home from close range. He’s evened his personal score with the Battalion, and more importantly, he’s given his side the lead, as all the pressure is now on the hosts, the Battalion knowing that they must level the score to avoid a playoff trip to Riverside.

It’s the 76th minute. A long, searching ball is sent forward, as Eli Galbraith-Knapp turns on the jets and gives chase. Alonso Lara thinks he has a beat on it and comes flying off his line. Galbraith-Knapp is on the left attacking side of the eighteen yard box, literally on the dividing line as Lara goes to ground, clearly tripping up the Battalion midfielder who goes tumbling to the turf. Lara hops up and immediately tells the referee that he made contact with the player outside of the box. The referee disagrees, points to the penalty spot, and shows Lara a yellow card. It’s a controversial decision, and it could be the lifeline the Battalion so desperately need.

Who steps up to take the spot kick? It’s none other than Justin Picou, the man who gave away the costly penalty on April 24th, the contentious decision that gave Coras a lifeline, and a subsequent 1-1 draw at home. The whistle blows. Picou steps toward the ball, Lara dancing on his line. Picou sends the keeper diving to his left, as his shot goes straight down the middle, blasted high, under the bar and into the back of the net. The crowd at Del Norte goes wild, as Picou celebrates with a cart-wheel and an acrobatic back flip before blowing a few kisses to his family and friends in the stands. It’s 1-1.

In the third minute of added time, the Battalion goal is threatened again, as Julio Ayala thumps a low shot to the near post, to the left of James Stroud. After frantically moving all the way across the goal mouth from right to left, Stroud lays out a full stretch to prevent Ayala’s shot from sneaking in. The fans let out the loudest cheer of the night, excitement mixed with exhalation as the ensuing corner kick is cleared out.

The final whistle blows. The two teams have again played to a 1-1 draw, the happenings of the match feeling like they had an almost poetic meaning. The identical scoreline and the identical style of the game, the two highest scoring teams in the conference ratcheting up the defense and putting the emphasis on closing the other side down. The personal redemption for the defenders, Cabello and Picou. The controversial penalty, and of course the performance of Stroud, who fittingly takes the Man of the Match honors for the third time this season.

You can step out of the Delorean now. We’re back to the present moment.

The two teams will again do battle on July the 9th, a one-off knockout contest in the first round of the NPSL Playoffs. There will be no sharing of the spoils this time around. One team will move on. One team will see their season come to a close. There must be a winner. Who will it be?

Hailing from Watsonville, California, Nate Abaurrea is a writer and broadcaster specializing in coverage of the beautiful game on both sides of the USA-Mexico border. In addition to the #SNPod, Abaurrea's voice can be heard calling Liga MX matches in English for Club Tijuana, USL-PDL action with So Cal Surf, and the MASL with the San Diego Sockers. He also loves wine. And tacos.
Newer Post
NPSL Southwest Regular Season Wrap & Best XI
Older Post
Albion Pros win Clash of the Border vs Club Tijuana Xolos U20