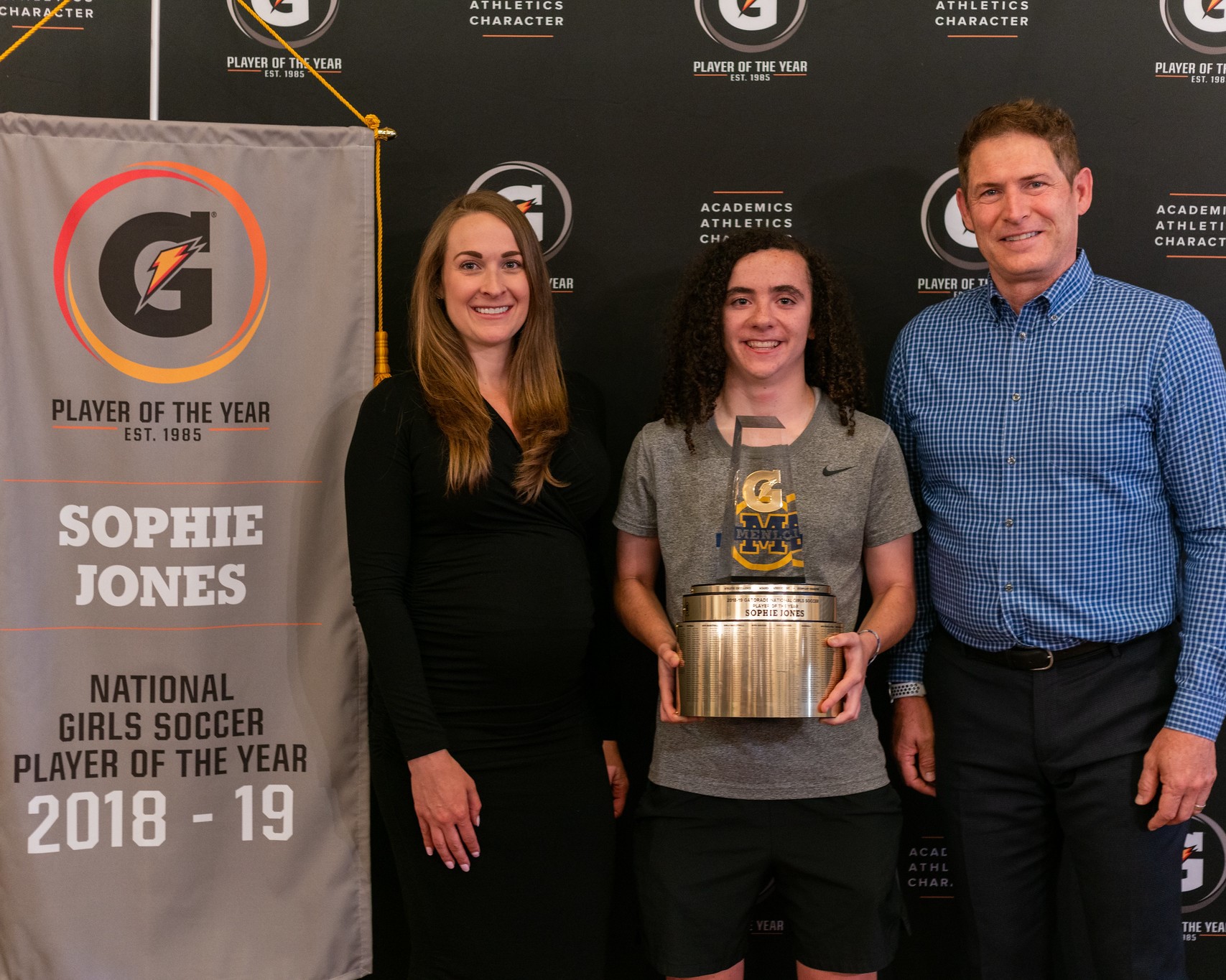 Sophie Jones, future Blue Devil The Gatorade Player of the Year program recognizes the nation’s most elite high school athletes for their accompli

Sophie Jones, an interview with SoccerNation

Gatorade just announced the winner, surprising Sophie with the happy news. Immediately after the announcement, I had the chance to chat with Sophie.

SN: Congratulations! Were you surprised this morning?
SJ: Thanks! I thought I was just doing an interview about being the Gatorade Player of the Year for California, so this was a huge surprise. It’s awesome.

“When I finish my career, I want to look back and have no regrets.”

SN: You’ve had quite a youth career! What are your ultimate soccer goals?
SJ: When I finish my career, I want to look back and have no regrets. No matter where that takes me, if I know I’ve worked hard every day, I’ll be happy.

SN: What will your major be at Duke? Any ideas?
SJ: I just want to finish high school! Everyone asks me that, and I just don’t know. For now, I’m listed as undecided. Once I get to Duke, it’s going to be such a wonderful environment, I want to learn all I can there.

“My mom and dad are the strongest and happiest people I know.”

SN: Speaking of amazing people, who are your biggest inspirations?
SJ: For me, for soccer, Lampard, Drogba, Hazard. they’ve inspired me on the field. I want to take what I see in their game and apply it on the field when I play. They’re so amazing. Off the field, honestly, my family inspires me every day. My mom and dad are the strongest and happiest people I know. I want to be like them when I get older.

(side note: As a fellow life-long Chelsea fan, I am now fully convinced that Sophie is a highly intelligent, wise, and discerning person with the very best taste.)

SN: Who are your favorite players in the Women’s World Cup?
SJ: Oh my gosh, waking up every day and having women’s soccer is so awesome. I feel like I’m not getting anything done [laughs], but I love that there’s women’s soccer on every day. I love watching them play. On the US team, I really like watching Megan Rapinoe. she’s so creative. Anything can happen when the ball’s on her foot. Julie Ertz is so consistent and amazing. Her grit is so inspiring. I love the whole team, but those two stand out to me a lot. And it’s just crazy to think that Mallory Pugh won this same award as me just a few years ago! I still can’t believe it.

“The US can definitely win the World Cup”

SN: I’ve gotta ask! Who do you think is going to win the World Cup? If you had to bet one dollar and pick who’s going to win…
SJ: Umm.. I think it’s tough! The US hasn’t been challenged yet. If I were to place a bet it would be on the US, cuz I have to! They have the tools to win it all. The US can definitely win the World Cup, but it’s going to be a challenge for sure.

SN: Thanks so much for taking the time to talk. Is there anyone you’d like to thank?
SJ: There are so many people. Everyone at San Jose Earthquakes, all the people who have worked with me in YNT camps, all of those coaches who have helped me through the years. They know who they are, and I’d really like to thank them. I wouldn’t be here talking to you [winning Gatorade Player of the Year] without them.

Read more about YNT camps and what it takes to get there by clicking this link.

Jones was a star with the San Jose Earthquakes from 2017-2018. Before Quakes, she played for De Anza Force, another top bay area club. Jones participated in the inaugural season of the U.S. Soccer Girls’ Development Academy in 2017-18, leading the Quakes to the Academy Playoff Semifinals. She was also named the Girls DA U16/U-17 West Conference Player of the Year. After the DA season, , having already committed to Duke, she left Quakes in order to play her senior season of high school soccer for Menlo School. (In order to be named the Gatorade player of the year, an athlete must play for his/her high school.)

Her senior season of high school soccer was a good one. Jones recorded 18 goals and 16 assists for Menlo School despite missing the final two games of the season while training with the U.S. Soccer Under-20 Women’s National Team. She led her Menlo Knights to a 20-2-2 record and the Central Coast Section Division I CIF Championship.

Eleven of the players on the USA’s 2019 Women’s World Cup roster are former Girls Soccer POY winners, including Mallory Pugh. Pugh and Mia Hamm-Garciaparra star in Gatorade’s new inspirational film “Every Day Is Your Day.”

From all of us at SoccerNation, congratulations and good luck at Duke, Sophie!