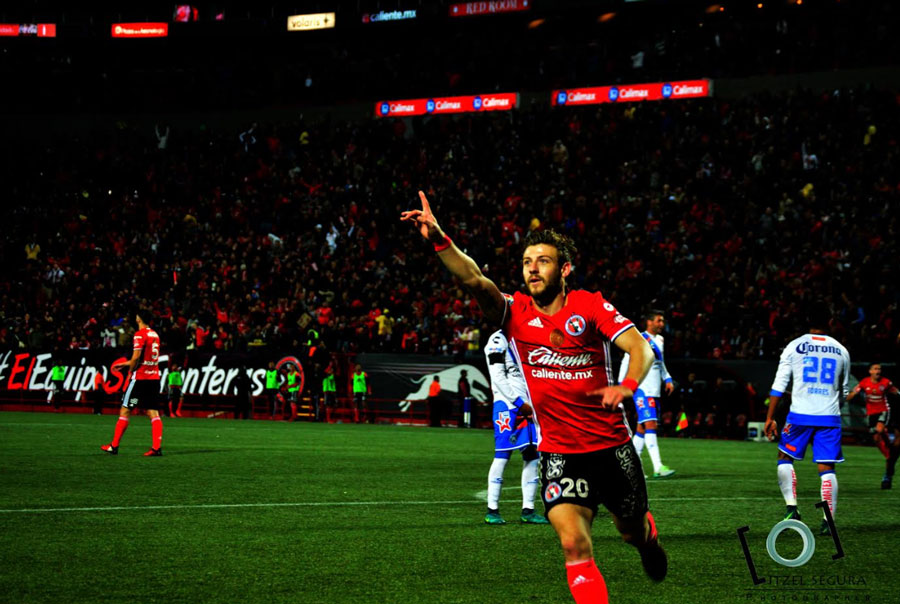 Paul Arriola has had quite the unique soccer ride in the Spring of 2017.

Fighting with a relentless vigor for his place with both club and country since the turn of the new year, logging more travel miles than ever before, Arriola is currently in fine form as April draws to a close.

He and his Xolos team are now atop the Liga MX table with two regular season matches left to play. Thanks to a 2-0 win over Toluca on Friday night, Club Tijuana are also assured of a playoff spot, an invaluable achievement in this parity filled Clausura campaign.

Arriola started and played 64 minutes for Tijuana against Toluca, suiting up alongside his fellow San Diegan and United States international Joe Corona who scored the winner on a ferocious headed attempt in the 72nd minute.

Arriola caught up with yours truly for an extended chat after the match, discussing the topsy-turvy month of April for Xolos, the curse of the superlider in Liga MX, happiness for Corona, what it’s been like playing with Aviles Hurtado this season, and more.

Nate Abaurrea: “So I remember back in March after this team lost a couple games, we were talking about how things needed to change. Then you guys drew a couple matches. We talked about you guys getting over that next hump. Now you’re as hot as any team in the league and winners of three straight. What’s this all been like from your perspective?”

Paul Arriola: “In a league like this one, it’s all about finding the right form at the right time. For us, this is the most important time. This is how we want to be playing going into the playoffs.

Last season around this time, for those last couple games when we were in a similar situation, we didn’t do too well. We weren’t playing very well at the end of the regular season and it cost us once the playoffs hit.

What’s great for us is that the past doesn’t matter right now. We’re just looking forward to doing everything we can to win these last two games and go into the playoffs extremely hot.”

Nate Abaurrea: “Paul, we hear all about this ‘curse of the superlider‘ in the Liga MX playoffs. Is there anyone who actually buys into that or is it all just nonsense to you and your teammates?”

Paul Arriola: “It’s not important to us. What’s important is being IN the playoffs, just making sure that we’re in there, especially in a season like this one where things are so tight all the way down the table.

This win tonight was extremely important for us. Obviously the 1 vs. 2 was a big deal, but it was just as big as the chance to clinch a playoff spot.

Personally, I don’t think the seedings matter when it comes to the playoffs. What’s important is what kind of form teams are in. Form is by far the most important thing. We learned that lesson last season, and I honestly think that will help us going into this liguilla.”

Nate Abaurrea: “How are you feeling about your game of late?”

Paul Arriola: “I feel good. I feel confident in doing what I’m being asked to do. I’m always happy to be out there and to be able to take players on.

For me in this game, there were glimpses of what I’m able to do when I’m going at defenders and getting in behind the defense, and there were times when I felt good in connecting with Aviles or with Milton (Caraglio). I maybe ended my time in this game with a little less gas in the tank than I would’ve expected. That first half was pretty intense from both sides.

Obviously the most important thing for me is to stay on the field and continue to help this team win. I need to be in good form just like the team does. Last game, I was able to get an assist in a close game, and I think those are the kind of things that really boost your confidence, especially as a young player.”

Nate Abaurrea: “I gotta tell you, there was a very strong San Diego presence in the ground tonight. There always is here in Tijuana, but tonight it was quite palpable. It seemed fitting that Joe Corona should get the winning goal. Knowing Joe the way you do, what was it like watching that header go in?”

Paul Arriola: “Everyone knows, Joe’s my boy. We carpool across the border together. We’re good friends. He’s my boy.

The last two games, he was subbed off in the second half. I think he wanted to make a statement tonight. He definitely made that statement. What a game he had. The goal was great, but it was more than just the goal.

For me, it’s important to continue with the chemistry that we have on that right side. I think it’s something really special, even more so when Michael (Orozco) is in on that right side as well. We have a wonderful connection.

As fun as you’ve said it is for you to watch us, three Americans playing on the field together and linking up on the right side, it’s even more fun for us to be out there and working all together. We’re hoping Michael can get back from injury real soon.

I think we’re all glad that we can kind of exhale a bit as far as making the playoffs, and we can now just focus on what we’re good at, and taking things game by game.”

Nate Abaurrea: “I have to ask you about one other teammate before we wrap this thing. It’s a guy you’ve already brought up, and it’s a guy that a lot of people are mentioning in regard to being the best player of the season in all of Liga MX. Aviles Hurtado has been on another level in this Clausura campaign. What’s it been like playing with him this season, and what’s it been like developing a bit of cohesion among the two of you?”

Paul Arriola: “Aviles is one of the best players I’ve ever played with. The guy is unreal. He can do just about everything. He can attack as well as anyone. He can fly at you with speed. He can get up in the air. And when he needs to, he can get back and defend. Obviously, we don’t want him to have to come back and defend. We want to control the game and keep him up as high as possible because even if it’s one vs. three, there’s still a good chance, if that one is Aviles, that he’s getting through. It’s incredible.

For me, playing with Aviles this season and last season as well has been awesome. When you play with good players, they really can make you better. This season, playing with Aviles has really helped me a lot. Whether it’s just playing simple soccer with him or being able to play little 1-2’s with him and get down the line and try to swing crosses back toward him, it’s just fun to be out there with him.

It’s honestly just fun to watch him play. You gotta be careful ’cause he’s so good you can sometimes catch yourself just watching and getting lost in what he does out there. He’s one of those truly special players. Some of the moments this season have been unbelievable. The bicycle kick against Atlas and so many more.

People should know that Aviles is also a great team player and just a great person. He’s stepped up as a playmaker for our team this season and I’m very happy for him, and happy for myself to be able to play alongside him.”

Nate Abaurrea: “Thanks as always for your time, Paul.”

Paul Arriola: “No problem. Always good chatting with you.”

Arriola, Hurtado, Corona, and the rest of the Xolos face arguably their most difficult away fixture of the season with a trip to Nuevo Leon awaiting them this coming weekend.

Club Tijuana will face off with Tigres on Saturday April 29th, with kickoff at 5 PT. Despite the tenacious reputation of the reigning Mexican champions and their home of Estadio Universitario, Tigres are currently on the outside looking in when it comes to the Liga MX playoffs. Tuca Ferretti’s gold-clad crew are in 9th place, one point behind Pachuca with two matches to play in the regular season. They’ll also be just three days removed from the second leg of the CONCACAF Champions League Final away at the Estadio Hidalgo to none other than Pachuca.

Keep it with SoccerNation.com for all the match buildup and post-game breakdown, and for more English language coverage of Club Tijuana and Liga MX.