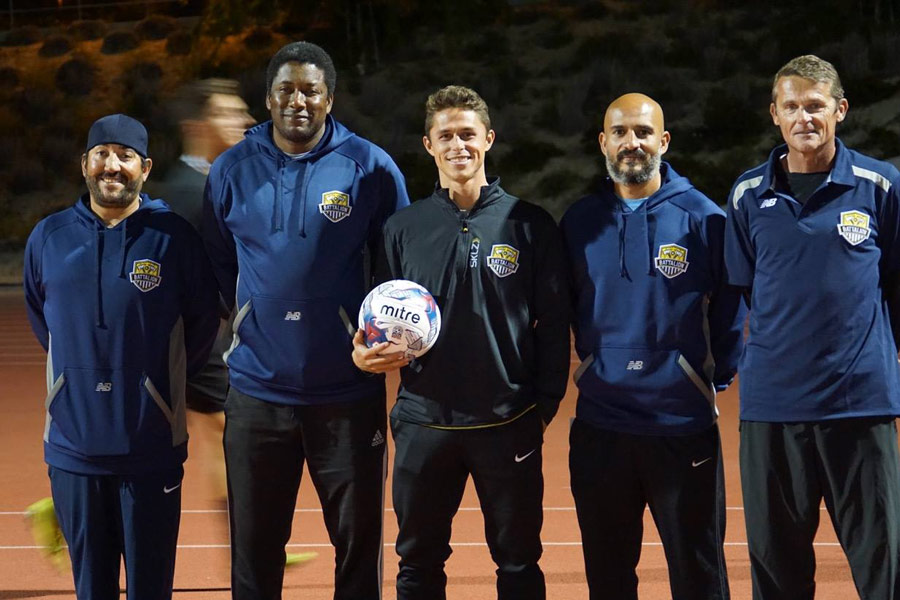 The North County Battalion are set to open up their inaugural NPSL season on Saturday in San Bernardino as they take on So Cal SC. With the final preparations being made, Soccer Nation’s Nate Abaurrea caught up with Battalion Head Coach Ryan Guy.

SN: “How’s the squad looking and feeling heading into the opener?”

RG: “I’m optimistic. We’ve been hit with some really tough injuries in the last week, but I’ve been through enough pre-seasons at various levels of the game to know that those things are gonna happen. We’re without a few key starters, most notably Adam Meltz and Sergio Ortiz, but there’s still a proper pulse within the squad, and a number of guys who are looking to step up.”

SN: “Is there almost a sense of curiosity around the team right now?”

RG: “Absolutely. We are an extremely gritty bunch, make no mistake about it. But pre-season can be such a weird time for players, as you don’t necessarily want to fully unleash that grit and physicality on your own teammates. While we’ve had some quality tune-up matches and scrimmages, it’s just not the same as the real thing. There’s definitely an element of curiosity as to what we’re gonna do when we’re all together for one cause on Saturday. I feel like there’s so much of that grit and intensity built up inside of everyone right now. We have to make sure we channel it in the best way possible.”

SN: “What’s the cohesion been like for the Battalion, with players ranging from 19 to 31 years old?”

RG: “I love our mixture of youthful exuberance and veteran poise. Sometimes, teams are ‘older’ or ‘younger’ groups. We’re both, and I feel like everyone benefits as a result. I see the older guys getting pushed and rejuvenated by the energy of the youngsters, while these younger players are gaining valuable knowledge and advancing their game any time they’re around the veterans.

SN: “In the absence of Meltz and Ortiz, who are some players you’re looking at to bring some real flair to the match on Saturday?”

RG: “It’s got to be a total team effort, and there’s never a way to truly ‘replace’ a player, especially someone like Meltz or Ortiz. However, if I had to choose a couple guys to bring some flair, they’d be Esteban Reyes (winger) and Nelson Pizzaro (center-mid). Esteban is such a talented young player, and he plays the game in a way that makes people want to watch. He plays in a way that can not only get fans excited, but also get teammates excited. He scored a great goal in our final scrimmage last week, and I sure would love to see him do it again on Saturday.

Nelson is a play-maker. He’s that type of guy that wants the ball at all times. That’s what you want in a play-maker. I want to see him getting involved in every attack, while still holding down his defensive responsibilities as a midfielder. I know he’s up for the task.

And while he’s not necessarily a ‘flair’ type, I’m looking for Berrick Rastok to have a big game. He’s a hard, physical player, and he wears that toughness on his sleeve as a badge of honor. But he’s also in a position as a holding midfielder where he becomes our quarterback, and is often responsible for starting our attack. Berrick is an incredibly honest player. He’ll always give you everything he has, and we need every bit of it on Saturday.”

SN: “There’s been quite a battle for the first string goalkeeper spot. Have you named a starter?”

RG: “I have not. I will be having a final meeting with our Goalkeepers Coach, Duarte Andrade, and we will decide then. With James Stroud still injured, it will be either Bryant Vera or Drew Tepping.”

RG: “Not a whole lot, to be honest. They too are a new team, and there’s definitely a certain level of mystery to them. I have great respect for the San Bernardino soccer culture, and I’m sure they will bring plenty of quality. We’re focused on us right now, and making sure that we are prepared to take on anyone, and win.”

SN: “What are your three keys to success against So Cal SC?”

RG: “First, starting well. We have to all know our jobs and do them straight from the opening whistle. I want us to score early and get settled, but we also must be patient.

Second would be what I call ‘intelligent industry’ in the final third. I want to see creativity in our attack, and see this team burying every chance we are given.

Lastly is a willingness to simply find a way, no matter what. Whether it’s ugly or pretty, we need to win, and that sometimes means eking out a result. There’s nothing wrong with that. Sometimes even ‘dominating’ a game comes from doing all the little things right. I want to see us eke out every moment, and find a way to win every battle on the field. If every individual thinks this way, the team will be stronger as a result.”

Hailing from Watsonville, California, Nate Abaurrea is a writer and broadcaster specializing in coverage of the beautiful game on both sides of the USA-Mexico border. In addition to the #SNPod, Abaurrea's voice can be heard calling Liga MX matches in English for Club Tijuana, USL-PDL action with So Cal Surf, and the MASL with the San Diego Sockers. He also loves wine. And tacos.
Newer Post
LA Galaxy II look to extend winning streak, OC Blues look for first win | USL Preview
Older Post
Xolos Looking to Gain First Home Win of the Season