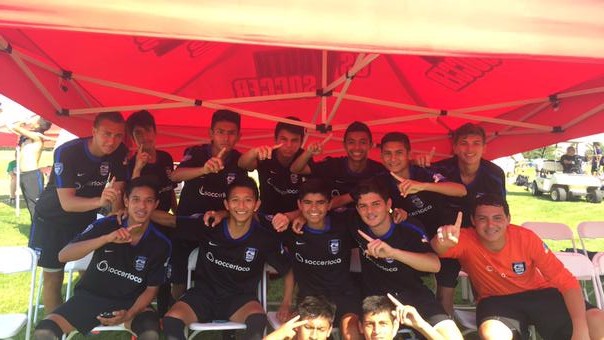 This past weekend elite young soccer players from all across Region IV* gathered in Boise, Idaho with the aim of conquering all rivals and qualifying for the National Championships in Tulsa, Oklahoma. The US Youth Soccer National Championship Series is the country’s most prestigious national youth soccer tournament, providing approximately 185,000 players on more than 10,000 teams from US Youth Soccer’s 55 State Associations the opportunity to showcase their soccer skills against the best competition in the nation while emphasizing teamwork, discipline and fair play.

We were fortunate to be able to speak with Jorge Gijon who plays for the San Diego Surf U15 team who emerged victorious from a very difficult group to book their tickets to Tulsa.

Dike Anyiwo: How long have you been with this Surf team and which position do you play?
Jorge Gijon: I have been with this team for about 5 years now and I play either left or right back.

DA: What was your overall view of the tournament venue and the competition?
JG: Overall it was a tough tournament because there were many tough opponents but the hardest challenge was probably the weather since we weren’t used to such a hot climate.

DA: Who was the toughest opponent you came up against?
JG: Honestly the hardest opponent we faced was Sherman Oaks Extreme(LAFA). They have always been our rivals over the years. Since the defeated us in the finals of National Cup we new we had to get our revenge on them.

DA: How did you feel during the shoot out in the semis?
JG: During the shoot out of the semis, I wasn’t part of taking them since I was a sub as they took place, but I felt confident because we are always practicing taking penalties. However of course I did feel a little nervous because I didn’t want that to be the end of our trip!

DA: What were your best and worst experiences at this tournament and what did you learn that you can take to Nationals?
JG: One of the best experiences was probably playing against all these tough teams because playing them helped us improve and gave us opportunities to fix our mistakes. This will help us prepare for nationals by letting my team know what we have to work on and what where we can improve to win it all. The worst experience was probably the climate because it was very hot, so my team and I had to get used to it. Also the grass for longer and there was a higher altitude with made it harder to breathe and that made us get tired really fast. This will help us in nationals thought because if get used to it, we will be more fit than other teams that aren’t used it which will give us an advantage.

Congratulations to the Surf U15 team on their achievements! We hope to bring you more about their journey to Nationals soon! Thank you to Jorge for taking the time to speak with us. 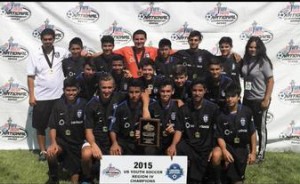