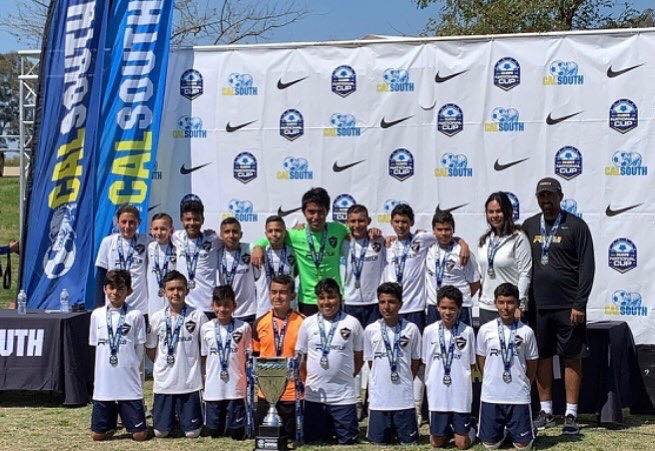 It took overtime to break the 0-0 deadlock of the Cal South Boys U13 National Cup Championship game. Rebels SC of San Diego, coached by Hector Camel

It took overtime to break the 0-0 deadlock of the Cal South Boys U13 National Cup Championship game. Rebels SC of San Diego, coached by Hector Camello Aguilar, were facing a strong Pumas USA team. As the end of the first 10min overtime period drew near, Rebels sent a long ball towards the Pumas’ corner flag. A Pumas defender chased down the ball, hoping to shield it out of bounds for a throw-in. He was outrun and out muscled, however, by a Rebels player who settled the ball and lofted a clean cross into the box.

As the Pumas goalie jumped to collect the incoming cross, a Rebels player also challenged for the ball. With the ball loose in front of goal, the Rebels player fired off a turning side-volley. The championship-winning shot flew into the back of the net. There were a few moments of review. Even though the Pumas goalie was on the ground as a result of the physical challenge, the goal was allowed to stand.

Cal South live-streamed the game, as they did last year. Out-of-town family and friends could watch the action live, and Cal South published the entire game film to YouTube. See the winning goal below. The winning play begins at 1hr, 51min, 17sec:

Parents yelled and Pumas players protested to the ref. In the meantime, Rebels players, after a short celebration, went to the Pumas goalie to make sure he was OK. They helped the goalie to his feet and gave him pats on the back, hugs, and high-fives. Meanwhile, the Pumas players were circling the ref arguing the validity of the goal. Once the goal was allowed, the first overtime period ended. The second 10min overtime period was goal-less, and the game ended 1-0. Rebels SC had become Cal South National Cup Champions and also had displayed an impressive amount of class after the winning goal.

From everyone at SoccerNation and Soccerloco, congratulations to Rebels SC. [#BonitaRebelsForever]
Good luck at Far West regionals later this summer in Boise!