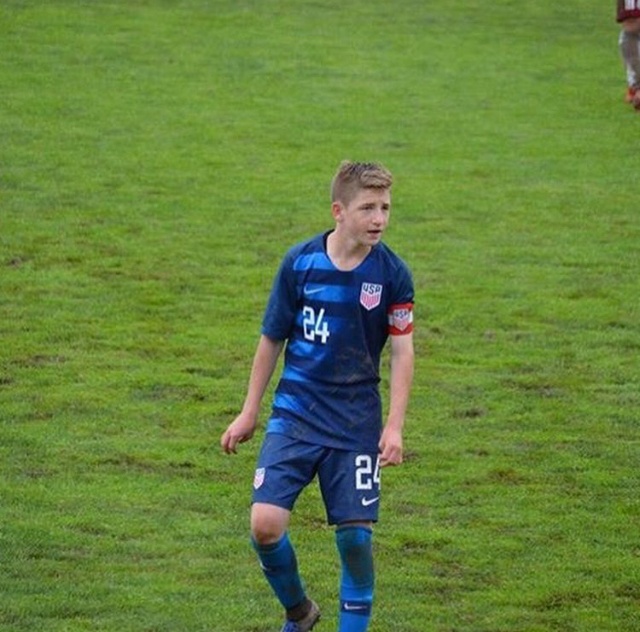 This interview reveals the lifestyle and mindset of a player with great ambition. At age 15, the San Diego native has been and remains one of the hi

This interview reveals the lifestyle and mindset of a player with great ambition. At age 15, the San Diego native has been and remains one of the highest (if not the highest) rated talents in the country. Evan shares what it means to represent the USA, his ultimate goal, biggest influences, the role of his family, how he adapts training during COVID-19 and advice to aspiring footballers. Remember the name and enjoy the interview!

What does it mean to you to represent the US Youth National Team?

Representing my country is a huge honor. To do it through the game I love makes it even better. Having the ability to travel the world to compete against other nations is always an amazing experience. It allows for players like me to get a real feel for what life is like overseas as well as get great exposure from different football clubs. Selection for the National Team is a major privilege because not many people make it of course. Every opportunity that I get to fight for my badge reminds me that I’m on the right track and that I just have to keep my head down and keep working.

“It’s obviously a great honor to make the Youth National Team but the end goal for me is to one day make the Men’s team, and personally I won’t be satisfied till I make it there. Even if that were to happen, I probably won’t be satisfied because there is just so much more out there to achieve.”

What is your ultimate goal in soccer?

In my opinion this question is very interesting. Different people will set limits to what they can achieve or think they can achieve. Since I was little, I have always wanted to move to Europe to play soccer. I was exposed to the European game early on because of my mom, who is French.

“Soccer in the US is getting better, but everyone knows that Europe is where players should go if they want to continue to push themselves and develop.”

For me I never want to set limits on what I can do. I started playing the game when I was 3 and since then I have devoted so much time to studying and improving my personal game. For me I feel that throughout this past year or so I’ve wanted even more, that I need a bigger challenge in my life. My next goal is to develop at a good European club and then progress to the first team for a
big European club. My ultimate goal is to be the best American player of all time. Big words I know, but you sometimes have to set big goals if you want to push the boundaries of what you are capable of achieving. I want to leave a path for future players to follow and hopefully make a name for myself and for my country. I want to be able to leave an impact on the game that is big
enough to encourage it to get even better in the US.

What or who has been your biggest influence on your development?

If we are talking purely soccer development, my Dad has by far been my greatest influence and I will stand by this answer forever. I know it’s the answer that many people say, and you might be thinking that I’m just saying this just because, but that’s the simple truth of the matter. He brought me into the world of soccer and therefore he will always be my greatest influence for that reason alone. I would say my dad taught me 75% of what I know about the game. He was my first coach and my most influential one. He has helped me develop the basics all the way through to where I am today. He constantly is renewing his knowledge for the game to try to pass it on to me. My mom has also played a huge role in creating a good mindset. Both her and my dad have worked on a lot of things outside the game that have helped influence me for the better. They have worked to train my brain to be able to adapt to different situations as well as work through possible injuries. If you really know me, you know I’m not a pushover. If you say something wrong to me, I will say something back, that’s just the way I am.

What have you been doing during the time of COVID-19in regards to training?
I received different training plans from my club and my agent, and along with my dad we’ve put together a routine that involves different types of soccer training, running, physical strength, and recovery.

“I’ve been working a ton during this quarantine. Probably more than I would on a normal day because I have more time to dedicate to the game.”

Mondays are heavy load days that involve several different types of work outs throughout the day. On Mondays I first train in the morning. The first workout is for my overall body which is normally about 40 minutes long. In the afternoon I will train on a specific soccer skill in my backyard with my dad as well as do a run with my mom. Training obviously is constantly changing week to week. Runs will vary from 45 minute runs to short sprints, to basic sprinting mechanics. Tuesday is a semi recovery day for me. In the morning I will do a video review session with my dad as well as lots of stretching and mobility exercises. In the afternoon we will have a purely shooting based session. Wednesday typically follows the same plan in terms of training and running as Monday with the only difference coming with the change in the specific physical workout we might work on. Either legs, core, or upper body. Thursday is the same, but the workout will again rotate. Fridays include soccer training and a small run. Fridays will also usually include plyometrics.
This is where I work on improving short bursts, explosiveness, and jumping mechanics. Saturdays we do some sort of small sided game or other fun activity with my family. We will either do something like 2v2, goalkeeper wars, or some sort of game. Sundays vary depending on how my body feels. Sometimes they are completely off from any work. Other times I will just
go for a long run. Or if I’m feeling good then I will run and train.

How has growing up in SD helped/hindered your development as a footballer?
Growing up in San Diego has helped my development a lot. Many already know that there is a huge influence from Mexico in San Diego in terms of players and style of play. This has helped create better competition in my opinion and it has also helped to create an amazing culture for the sport here.

“In my opinion San Diego has one of the best player pools in the whole country.”

When I was younger I used to play in the Aztec league down in Chula Vista. This league is where I experimented with creative moves and competed with all different types of players. San Diego also has a large futsal and street soccer culture. I’ve played futsal and street soccer since I was really little and still enjoy playing small sided games today.

What would be your ideal next step to reaching your ultimate goal?

That’s a great question! The next step in hopefully one day reaching my ultimate goal is coming soon. I will be moving to Europe in the summer to sign a professional contract.

What would you advise younger aspiring players to help them to become their best?
Most people would tell younger players to work hard every day and that’s true. But that has to be a guarantee if you want to succeed.

“If you want to be the best you have to outwork the best. That’s a no brainer to me.”

There’s three pieces of advice I’d give to younger kids. First off, learn the game. Take the time to watch and review players in your position. Really analyze what professionals are doing. Compare them to where you are now and see what they are doing specifically to be at that level. Look at the smaller details, like body shape, movement on your first touch, which part of the foot a player uses to strike a ball in different scenarios and so on. Learn movements on the ball and off the ball that will allow for you to confuse a defense. Always continue to watch and analyze the game. Second piece of advice I’d give which is very important is to be a master of your ability. At a young age find out what you are the best at, what your best ability is on the field. Then master that ability. I’m not telling you to stop learning other parts of the game. I’m just saying if you want to make it to a higher level you have to be the best at a specific skill. Whether that is finishing, dribbling, tackling or passing. You have to find an ability that will allow for you to stand out, something that separates you from the rest and just continue to put work into building and adapting that ability while at that same time improve your
weaknesses. Third and final piece of advice I’d give is to never lose your love for the game. As you get older there will be other things that can distract and might pull you away from your final goal. Maybe one day you can make it so that football is your job. Never lose your love for the game. The enjoyment of playing and what it means to you. Because if you do then you will no longer enjoy what you’re doing. If it gets to that point then you have to think to yourself why am I doing this. It’s just like in all jobs in my opinion; if you don’t enjoy it then why are you doing it. Always enjoy the game and if you get lucky enough to make it your job even better.

We can see that Evan has the drive and determination to be the best player he can possibly be. We wish him nothing but the best as he represents San Diego and the USA. Big thank you to Evan (and his family) for sharing with us. We look forward to hearing about his success to come. I hope this interview is insightful for parents, players, coaches and anyone involved with youth soccer. Evan is a young professional that influences the game in a positive and impressive way.

Loading...
Newer Post
THIS WEEK FROM OLYMPUS: ACL INJURIES. THE GOOD, THE BAD, THE UGLY: A PREVENTATIVE APPROACH (PART 2)
Older Post
Youth Soccer Shakeup: Ahead of the Expected End of the DA Era, Top Clubs Announce Move to Boys and Girls ECNL