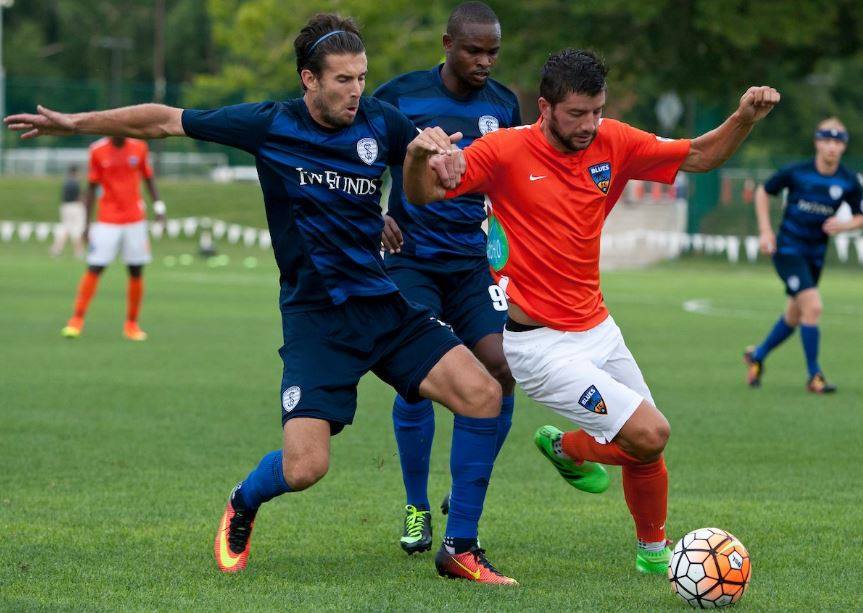 Tough result, but season still ends on a high.

The Orange County Blues second USL playoff game followed much of the same script of their first playoff game.

On Sunday, against Swope Park Rangers in Kansas City, Missouri, the Blues were underdogs, took some time to get their feet under them in the game itself, but really got into the action in the second half, as they took the game to 120 minutes.

And all of the fortune was turning in their direction, as down 1-0 with a little over 20 minutes to go, a Swope Park Rangers player was sent off, followed by a crucial OC equalizer from substitute Max Rauhofer. Things were looking up even more when a second SPR player was sent off in the dying minutes of regulation. It all looked to be coming up Blues.

But it wasn’t to be, as SPR’s Dane Kelly came off the bench and improbably scored the go-ahead goal for nine-man hosts, in the 105th minute, no less, as Swope Park Rangers won the Western Conference semifinal 2-1 and will host Vancouver Whitecaps FC 2 in the conference final next week.

For Orange County, the road ends here on their 2016 season. On one hand, the way they lost, hanging tough and getting a two-man advantage over the course of the game, only to let their opponent neutralize that by taking the lead once more, is going to hurt. Full credit to Swope Park, who did not sit back and let the Blues hammer them in the attacking third throughout extra time, instead opting to wear out Orange County by going after chances in their own half repeatedly, and getting one of those in the net. But given the context, it’s a tough result for OC, underdogs or not.

At the same time, the final few weeks of Orange County’s season put the campaign in a positive light. After a season of absolute inconsistency, the Blues managed to qualify in the most dramatic way possible, in scoring additional needed goals on the final day of the season to catapult up the standings past two teams, and then made club history in winning their first ever playoff game last week. While they couldn’t get the job done on Sunday to make it two wins in two and come within two games of winning the league title, the season still turned out to be pretty good, all things considered.

With the season over, it will be interesting to see what changes are coming to the OC Blues ahead of next season. Roster turnover is common, of course, but with a new majority owner in James Keston and a full offseason to make promised plans regarding expansion of the club’s staff and beyond, there’s certain to be many developments moving forward. We’ll keep you posted on the changes and any other local USL stories this offseason.

Alicia covers soccer in Los Angeles for SoccerNation.com. Her work is also featured on Angels on Parade and MLSsoccer.com. She lives in Southern California with her husband and daughter.
Newer Post
Episode 1 – The Pilot
Older Post
Around the World With a Six Pack