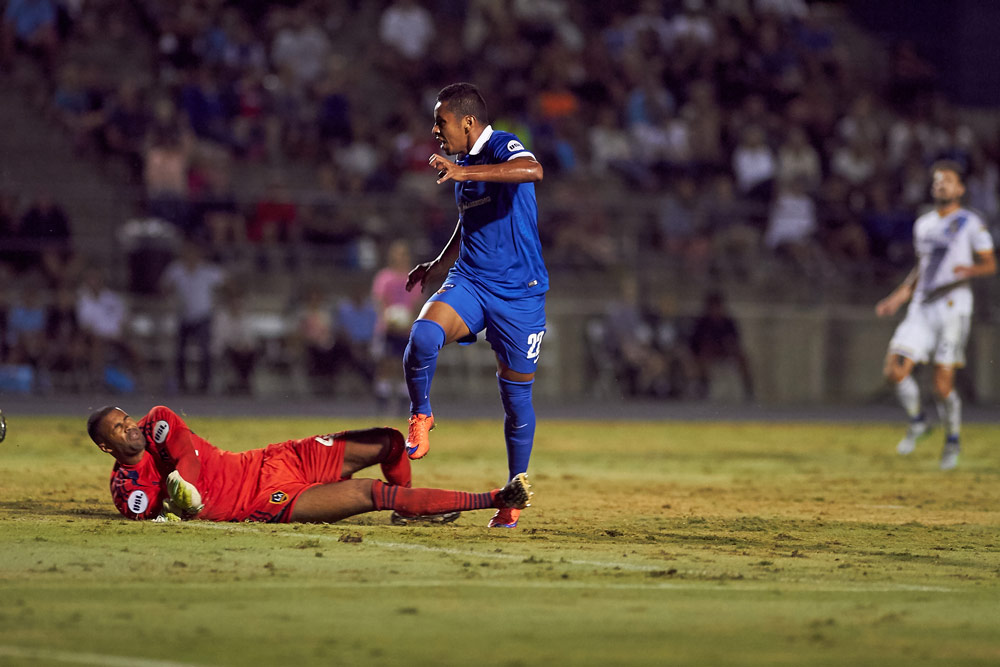 History was made Saturday night in front of an electric, sold out crowd of 3,000 as Orange County Blues FC recorded their first ever victory over LA Galaxy II at Anteater Stadium, 2-1.  With the win and some other results in USL, the Blues clinched a spot in the postseason.

Brenton Griffiths’s header and Christofer Ramirez’s game-winning finish led the Blues to arguably their biggest win of the season.

Galaxy II would strike first early in the 13th minute, drawing a foul in the box to resulting in a penalty kick opportunity. Ariel Lassiter slotted the ball on the ground for his tenth goal of the season, giving Los Dos the 1-0 lead. However, the Blues would continue pressing the LA defense, generating a number of chances and maintaining pressure in their attacking third.

The Blues found the break they needed in the 33rd minute, as David Estrada weaved through the defense, and took a well-earned shot that was deflected to give the Blues their fifth corner of the game. Christopher Santana drove the ball in the air to Griffiths who jumped well above his defender for the powerful header to net the equalizer before halftime.

Flying out of the gate in the second half, OC maintained the majority of possession for the remainder of the match. While LA would make a few attempts on goal, a flurry of late attack in the closing minutes of the match gave the Blues the chance they needed. Just before 2nd half stoppage time, Estrada took on his defender up the right side off a ball from Didier Crettenand, and found space to cross the ball. As he played it across the net behind the defensive line, it curled just enough to be out of goalkeeper Clement Diop’s sliding reach. Ramirez timed his run perfectly to make the connection on the far side as he slotted the ball home for the game-winning goal, and the 2-1 victory.

The Blues next travel to the Pacific Northwest to take on Seattle Sounders 2 on Friday, September 11, 2015 with kickoff slated for 7:30 p.m. PT