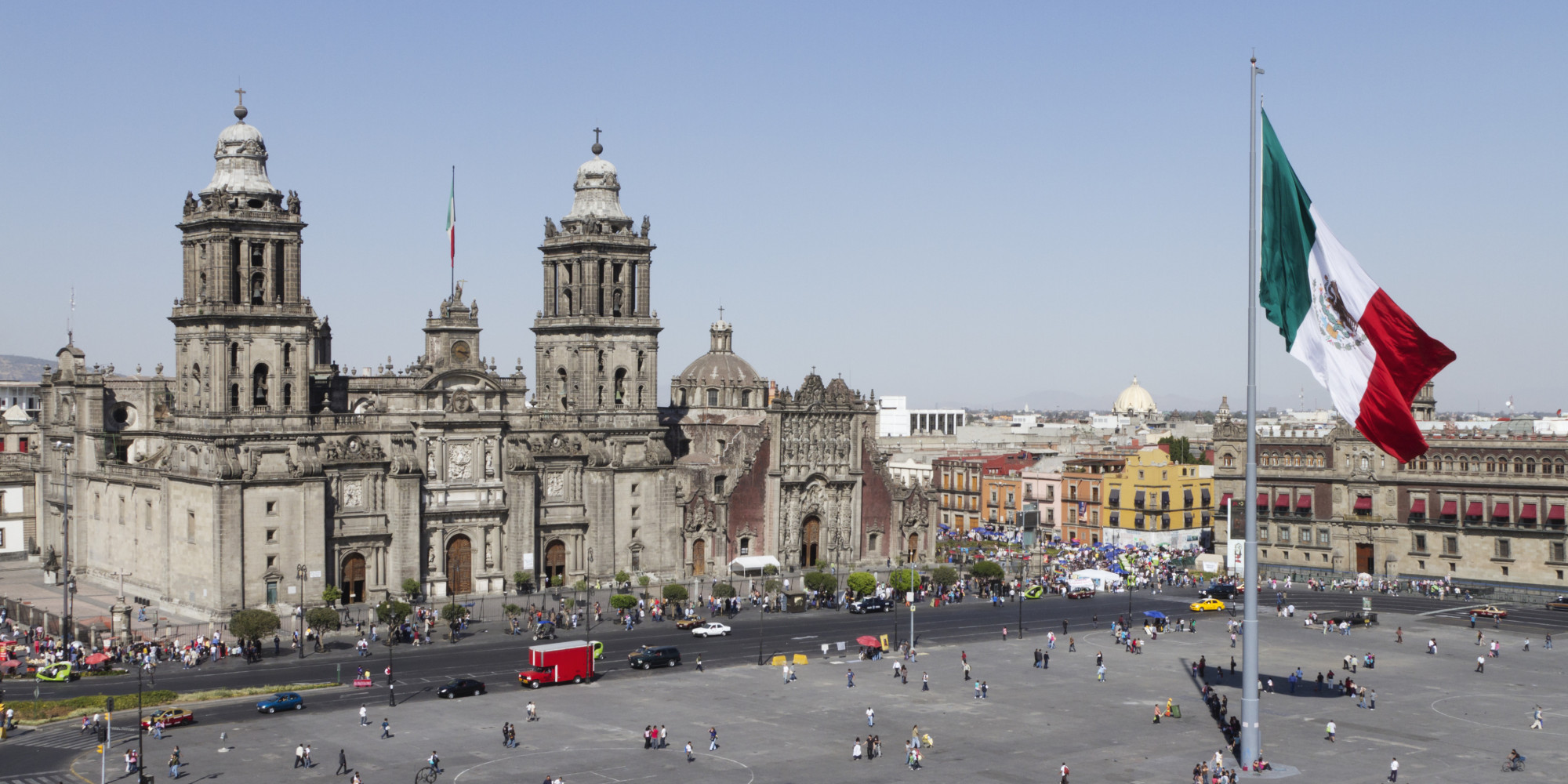 I arrived in Mexico City on a Thursday night, September 7th, 2017.

I stepped off my AeroMexico flight from Tijuana at 9 PM local time, eyes gleaming, ecstatic to explore this sprawling metropolis and bastion of culture for the first time.

Oh, and the futbol! 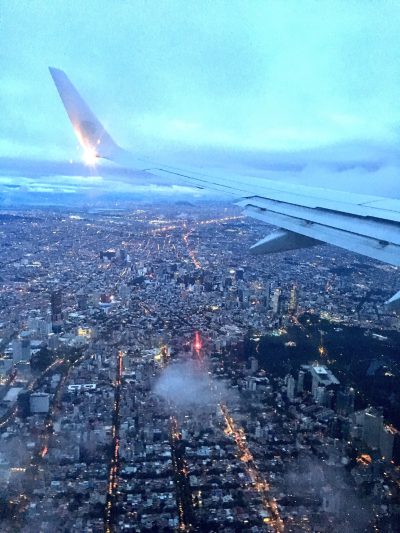 Descending into a city of over 20 million people, CDMX.

The soccer based plan was to tour the Estadio Azteca on Friday, before taking in the Saturday night fixture between Club America and Veracruz. That match would be followed up by a trip to the ruggedly nostalgic Olimpico Universitario to see Pumas host the Xolos of Club Tijuana just a few hours later, that one kicking off Sunday at noon. I even got to fly over Estadio Azul, the home of Cruz Azul and the one Mexico City Liga MX stadium at which I wouldn’t be able to see a match during the trip.

Soccer was supposed to dominate my time in CDMX. Within a couple hours, it became a mere afterthought as priorities swiftly shifted in an unforeseen direction. 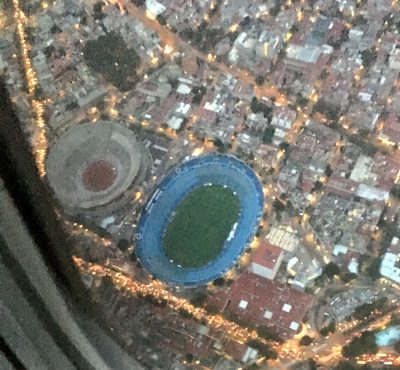 After taking an Uber from the airport, I made my way to my Air BnB in Colonia Roma by 10, a glorious spot on the 11th floor of a historic building, overlooking skyscrapers and the valley to the south. Around 11:30, I went for food a half dozen blocks or so away.

Fresh off a travel day that started in San Diego, I wound up at a joint called “Taquitos Frontera”. (Insert line about how you can take the boy out of TJ… here.) 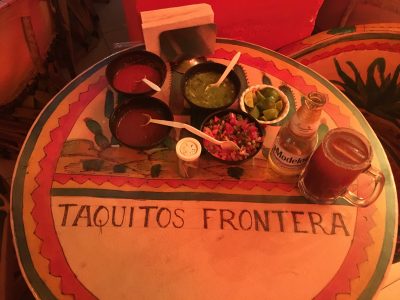 When you travel over 1,700 miles and basically end up back home…

The place was crowded and the staff was warm and welcoming. I was sitting in the corner eating a tasty bistec quesadilla and sipping a delicious michelada Cubana, looking around the restaurant and the adjacent streets, thinking all about how much I was already falling madly in love with this incredible city.

Seconds later, the building began to shake. A tall man got up from his table and his body swayed from side to side. He lost his balance and stumbled out the door. I followed suit. The shaking became stronger. Still stronger.

I’d been through dozens of earthquakes in my life as a Northern Californian, and the deja vu struck hard. People began fleeing into the streets in mass.

Every bar and restaurant and all the houses had people heading for safe ground, as far away from the buildings as possible. Kids in pajamas, elderly men and women, pets, the lot were all out on the streets together.

We soon lost power in the entire neighborhood. The shaking continued, the intense trembling eventually winding down to less powerful aftershocks, as that eerily spectacular scientific phenomenon that is “earthquake lightning” flashed in almost every direction. I could see a chandelier in an upstairs window swinging violently. The shaking of the ground, which felt like it might never end, finally came to a close.

This was the scene here in Colonia Roma at 11:55 local time. People fleeing into the streets. Ground stayed shaking for quite a while. #CDMX pic.twitter.com/xUBO25RrlH

I slowly spun in a circle and looked closely at the few hundred people around me. Everyone was incredibly calm considering the circumstances. There were dozens of kids and none of them were crying. Some were wiping sleep from their eyes, as they’d clearly been woken up by all this. The elderly folk sat on the sidewalks with facial expressions of relief. Well dressed men and women from the upscale restaurants along with bearded hipsters and punk rock girls milled about, strangers chatting with one another as everyone’s phones began lighting up with calls from friends and loved ones.

I couldn’t believe the collective attitude being put forth. It was soothing. There were lots of folks who were visibly shaken up, but even they were holding it together, many with the help of calming words from those around them.

They say that after the storm comes a calm. This was on another level. This was strangely divine in a time of complete and utter chaos.

I was proud of my fellow humans, very much in awe to be quite honest.

A man with large headphones walked back inside the now darkened restaurant I had been in, sat down, and began eating the rest of his food. I did the same. That half eaten bistec quesadilla and what was left of that michelada, in that precise moment, was better than any 5-star meal you could ever buy me in any restaurant in any city in this world. 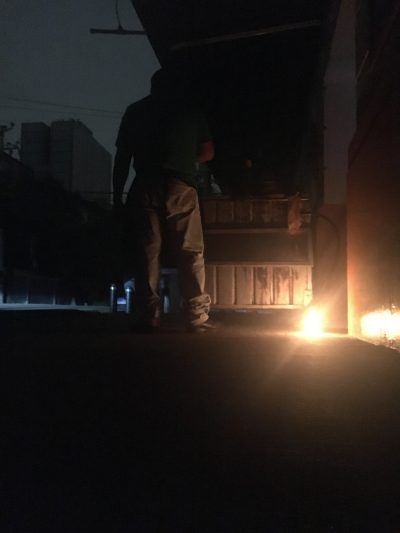 A street vendor in Colonia Roma lights a small flare as he continues cooking in the minutes following the earthquake.

I left back to the apartment, through streets that were frighteningly dark, many segments pitch black. I walked past at least a couple hundred more people, each and every one of them on a clear adrenaline comedown.

I got to the complex and made it up to the 11th floor. Some paintings were crooked and some small chips had come down from the ceiling inside my host’s home. The power came back on within an hour. My host was inside when it all hit. He had frantically run downstairs and was still pretty shaken up when we spoke.

What was truly mind blowing to me is that my heart somehow didn’t start racing until about an hour after the quake. The calmness of the people I was around, people of all ages, kept me cool in a moment of serious danger, what could have easily been a moment of sheer panic. Once it all settled in, once what had happened actually resonated, that heart rate kicked up a notch or three.

I received numerous texts, tweets, and Facebook messages from friends back in the States and a few here in CDMX. “Some welcome this city gave you,” one of them read. I dove into the news outlets and social media and saw the magnitude. The quake was measured at 8.1 here in Mexico City, the biggest since the devastating “Terremoto de Mexico de ’85”, the 1985 earthquake that struck and destroyed massive portions of the city, tragically killing over 10,000 people. The Colonia Roma neighborhood was one of the most severely damaged areas.

Aftermath of the tragic ’85 Mexico City earthquake, measured at a magnitude 8.1 on the Richter scale.

As of this time of writing, there have already been 90 deaths confirmed in other parts of the country from this earthquake, mostly in the state of Chiapas, close to the epicenter of the quake off the Mexican south coast.

Deaths were also confirmed in Oaxaca, and thoughts and prayers only begin to explain the feelings from millions of people here in Mexico, hoping that those affected in these isolated, rural areas are able to regain their normal lives. So often when natural disasters hit, whether hurricanes or earthquakes, it is the poorest populations who are hurt the most. Humanitarian aid is desperately needed, and those efforts are already well underway.

Sirens stayed blaring in the Roma until sunrise. There actually wasn’t too much damage around the city, but serious emergency actions were taken. Best to use precaution I suppose.

As the heart rate slowed down to a sleepable level, I found myself in a state of sheer gratitude, thankful to be safe and slamming my fingers onto a keyboard. At the risk of sounding sick or masochistic in the face of what could have so easily been a catastrophe here locally, I’m actually quite grateful to have been here for all this. To see the way people reacted with split-second decision making and a collective calming spirit just confirmed what I was thinking at the very moment the trembling began.

(Stay tuned for Part 2 of “Mexico City”, as Nate heads to the Estadio Azteca for Club America and some serious soccer history nerd-out sessions. The series will also feature a trip to the Estadio Olimpico Universitario, and interviews with prominent writers involved with the #LigaMXeng movement.)