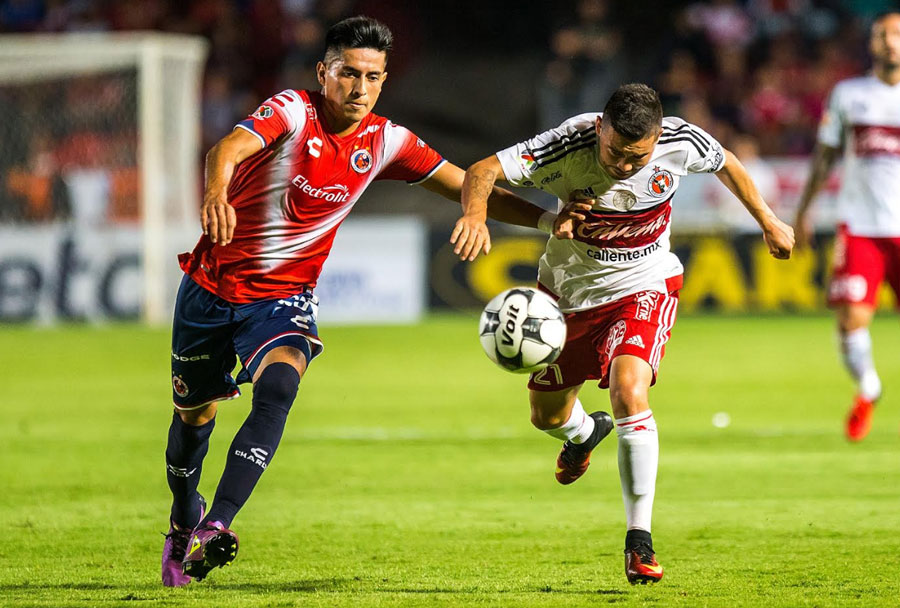 Club Tijuana Heads to Playoffs With Two Losses in a Row

Xolos are stumbling into the Liga MX playoffs.

Despite the fact that manager Miguel “Piojo” Herrera has led his squad to a #1 seed in the Liguilla, it wouldn’t be unexpected for many local fans to feel hesitant about the team which has now lost two games in a row. Although the first loss this month against Tigres might be forgivable, the same can’t be said for the most recent failure.

Last Friday, Tijuana was embarrassed through a 2-1 defeat by second-to-last place Veracruz. On paper, Xolos should have been able to stroll past the club that had previously lost eight consecutive matches. Instead, Tijuana found itself struggling against a side that was hungry for an early chance.

Veracruz was eager after kick-off and immediately found a goal by Agustin Vuletich during the 7th minute. Xolos bounced back with heavy possession, and an ensuing goal from Dayro Moreno in the 37th minute, but the opportunity was the only time that Tijuana would be able to find the back of the net.

It was clear that Moreno, who was fighting to become the regular season leading goalscorer, was given more of the attacking focus than normal. In his effort to gain the goalscoring title, the striker launched a total of seven audacious shots — a season high total for Moreno.

That said, fingers shouldn’t be pointed at the Colombian striker who eventually went on to share the goalscoring title with Morelia’s Raul Ruidiaz.

It should be noted that Tijuana’s defense was atypically out of sync on Friday. Nearly the whole backline was lost during the first goal from the opposition and was caught sleeping on numerous counters from Veracruz. Michael Orozco, who also had a few lapses in the match, scored an own-goal in the 87th minute that helped secure the win for the home side.

The argument could be made that Orozco had little time to react on the own-goal off a corner, but the right-back also didn’t help his case with his fairly quiet performance. Other defenders like Damian Perez and Emanuel Aguilera were also disappointing during the loss.

Xolos should have been destined for a move down to 2nd or 3rd place, but were helped by a couple of results from Tigres and Pachuca that worked in their favor. By the time that the final match of the regular season was over, Tijuana somehow found itself with another fortuitous spot in first place.

Should Xolos fans be worried? Maybe not, but Herrera must reignite some excitement in his squad.

Tijuana has only scored five times in the last six matches and could easily be knocked out in the first round of the playoffs. Leon, who will be facing off against Xolos in the quarterfinals, is on fire with a current 10-game undefeated streak.

Tijuana has the talents to beat Los Panzas Verdes, but the team will need to hold off a Leon attack that has recently looked thrilling under the leadership of striker Mauro Boselli. The Argentine is one of the key reasons why Leon was able to find a late resurgence in the season and a last second spot in the Liguilla.

Herrera has little time to prepare his squad and will need to quickly provide a motivating spark for the roster. If not, Tijuana’s hard-fought position in first place could quickly go to waste in the first round of the playoffs.

Other results from Week 17

Chiapas 1-0 Atlas
In a match that had no impact on the Liguilla, Los Jaguares were able to walk away with just their second win of the tournament. Chiapas will need to regroup in order to avoid relegation next summer.

Cruz Azul 2-3 Leon
What would a Liga MX weekend be without a last minute goal? Guillermo Burdisso provided the game-winning goal in the 91st minute that later secured a playoff spot for Leon.

Tigres 1-2 Queretaro
One of the more surprising results of the weekend. Tigres, who are currently in third place, now only have two wins in their last six matches.

Morelia 1-2 Monterrey
Monterrey will feel crushed after missing out on the playoffs by just one point. After the omission from the Liguilla, it will be interesting to see if Antonio Mohamed will remain as manager of Los Rayados.

Pachuca 3-3 America
Xolos fans were likely rooting for America on Saturday. After taking an early 2-0 lead, Pachuca appeared set to steal first place from Tijuana. However, Las Aguilas pushed back and held Los Tuzos to a 3-3 draw.

Chivas 1-1 Necaxa
Both sides appeared happy with the result that guaranteed a spot in the Liguilla for Necaxa, and a playoff series against America for Chivas.

Toluca 1-2 Santos Laguna
Santos ruined Toluca’s Liguilla plans through an impressive 2-1 away win on Sunday afternoon. Los Guerreros’ victory was just their fourth of the tournament.
Puebla 0-3 Pumas
Thanks to three goals, and Puebla imploding with two red cards, Pumas had no problems securing a place in the Liguilla on Sunday night.