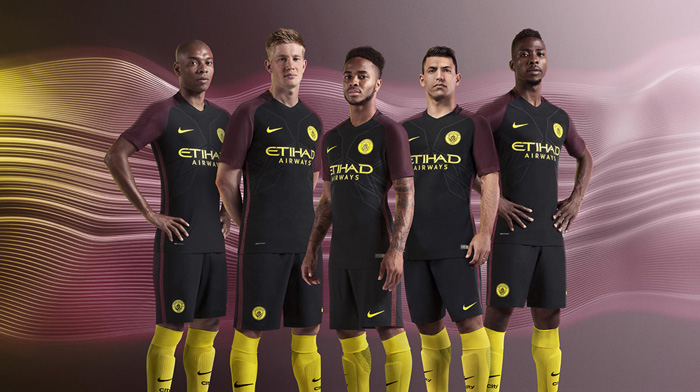 New away kit is inspired by the iconic Manchester "worker bee" symbolizing the city's rapid growth during the Industrial Revolution.

Club kit supplier Nike and Manchester City have unveiled their new away kit for the 2016/17 English Premier League and UEFA Champions League seasons. The new look which will be worn at matches away from the Etihad Stadium in the coming year features a unique black, red and yellow look that is sure to excite fans from the blue side of Manchester.

Inspiration for the Nike Manchester City away jersey and kit for 2016/17 comes from the famous black and red kits of their past as well as the iconic “worker bee”. The insect has been an icon of Manchester since it was first used to symbolize the city’s rapid growth during the Industrial Revolution. The worker bee is featured in the city’s coat of arms and can be seen on buildings, bridges, bollards and more.

Based on Nike’s jersey template seen during Euro 2016 as well as Manchester City’s home jersey for this season, the top features a black body and contrasting red sleeves with ribbed fabric that subtly shift color during movement. Lighter red trims the sleeves along with stripes running down each side from the armpit. The newly redesigned retro club crest along with the Nike Swoosh and front sponsor logo are a bright yellow to tie back to the worker bee theme. Black shorts with a red stripe down each side and bright yellow socks round out the kit. The word “City” is on the back collar and “Est. 1984” is on the inside of the cuffs.

The Nike Manchester City Away Jersey 16/17 is available at http://www.soccerloco.com/manchester-city starting August 4th.