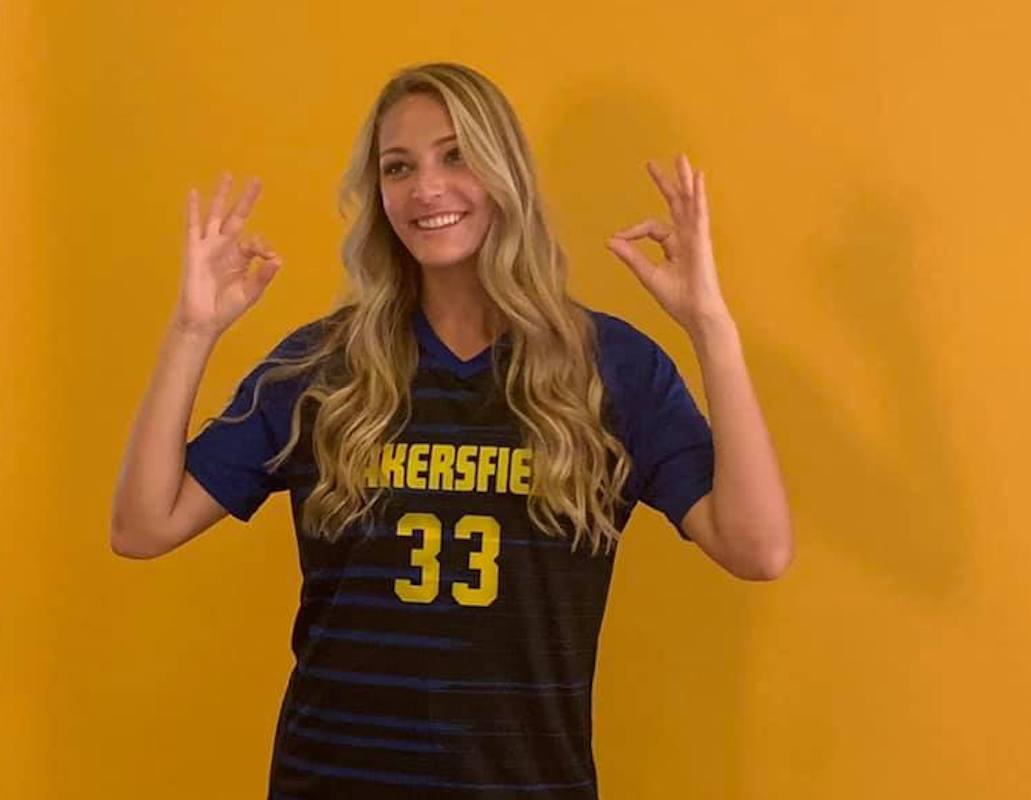 Living the Impossible Dream: From a Wheelchair to D1 Soccer

Last year, I told you Sarah Trent’s college soccer recruiting story. Recruiting specialists told Sarah all through high school that she needed to give up on her D1 soccer dreams. She didn’t listen. Now, she’s starting her sophomore season at New Mexico State University.

This year, I’m going to tell you another story about another player who never gave up on her college soccer dreams. When Cassandra Herrman was thirteen years old, her spine looked like this:

Every coach and every doctor told her she would never be able to live an athletic lifestyle, much less play college soccer. At thirteen, most future college soccer players are taking unofficial visits and racking up verbal offers. Cassandra, however, was in the ICU after a surgery that fused together TWELVE vertebrae in her back.

Cassandra zoomed through the hospital halls in her wheelchair with a cape flying behind her. Once she got home, she had to re-learn how to walk with her newly fused spine. After a few weeks with a walker, she was ready to walk unassisted. She eventually worked up to a jog, then a run. Then SOCCER!

Even though she was playing top-level club soccer, coaches and doctors still tried to keep her expectations reasonable. Her dream of college soccer was impossible according to all of those experts and adults. Cassandra, though, knew the impossible was definitely possible for her.

“You stand so straight. What’s wrong with you?”

At one recruiting session, a college coach scoffed and told her, “You have awkward posture. You stand so straight. What’s wrong with you?” Cassandra explained her spinal fusion, and the coach passed. That coach wasn’t the only rejection. As her high school years progressed, offers weren’t coming.

Cass told me, “Several college coaches I’ve been interested kept saying I’m ‘awkward,’ but little did they know I couldn’t control my awkwardness and my posture. But that doesn’t change how I play!”

Just before her senior year began, with her soccer hitting her stride and her back feeling great, she went on a visit to Cal State Bakersfield. After some great showings at showcase tournaments, Coach Vecchio offered Cassandra a place in his 2019 recruiting class. Cassandra only visited schools that have Pre-med programs. Her dream of becoming an anesthesiologist would not take a back seat to any college soccer offer. Cal State Bakersfield has a highly respected Pre-med and Biological Science program. Coach Vecchio, unlike some D1 coaches, is supportive of his players taking on strenuous “hard science” majors. Cassandra committed to be a ROADRUNNER.

Her final doctor appointment with her surgeon was July 25th before reporting to Cal State Bakersfield for her first D1 pre-season. Cassandra’s mom was there with her and told me, “Her doctor shed a tear when she told him that she’s D1 bound and has zero issues with her back!”

With her doctor’s note in hand, clearing her completely to play college soccer, Cassandra reported to Cal State Bakersfield on August 5th. The Roadrunners had their first pre-season exhibition on August 13th against The Masters University. “Cass” came in as a sub during the 5-0 Roadrunner win as mom and dad watched from the stands through streaming tears.

“This season is going awesome!”

Cass shared, “This season is going awesome! I’m bonding amazingly with the team and I’m super excited for this team’s future and I’m hopeful and still determined to have a large part in this team’s success”

Christina Herrman, Cassandra’s mom, is understandably proud of her daughter. She’s more interested, though, in telling her daughter’s story so that other families in similar situations can know that goals can be achieved despite physical obstacles.

“She never doubted herself.”

“I would say I can’t believe it, because she was told no so much. But I know Cass. She never doubted herself. Cass knew this was possible, and she never let the naysayers get her down. She just worked harder. I want other families to know that physical barriers can be overcome. Don’t give up on your dreams, and don’t let people say you can’t make it.”

From everyone at SoccerNation, best of luck to Cass and her Roadrunner family this season! #GoRunners