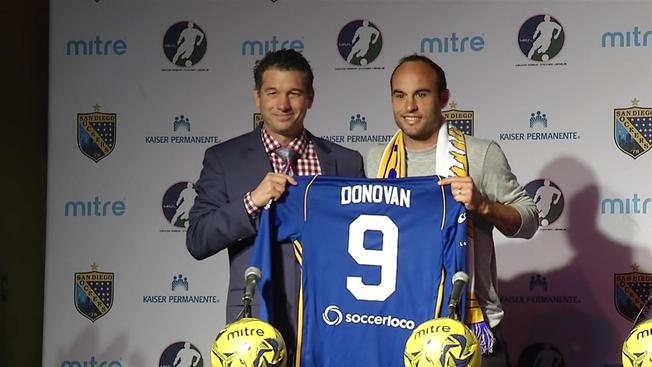 The Major Arena Soccer League got a huge boost today when Landon Donovan was announced as the San Diego Sockers new number 9. Widely considered as the United States’ greatest ever men’s player, landing Donovan is a game changer.

“We are thrilled to announce that one of the greatest soccer stars in US history is joining the Major Arena Soccer League,” said MASL commissioner Joshua Schaub. “It’s an exciting time for the MASL and we’re very lucky to have him.”

For the Sockers, signing Landon Donovan was an easy decision. “With the Sockers, you either win a Championship or the year wasn’t a success,” said head coach Phil Salvagio. “When the idea came up, it was a no brainer. The first priority is winning. Of he’s going to bring a lot of attention but the experience and leadership he brings is a perfect fit.”

For Donovan, the question of coming out of retirement again was more a matter of the opportunity. Fortunately for Sockers fans, they had an unlikely source supporting the idea. “My wife reminded me when I trained with the Sockers one morning how much fun I had. She said she hadn’t seen a smile like that in a long time,” said Donovan.

“I think this is the right opportunity for me to continue to play the game I love. It’s beautiful how it came about with the right team in the right city in the right league.”

“To be able to play with a group of competitive players who are fantastic and help them win a Championship for this city is perfect. I’ve fallen in love with the soccer community in this city in a way I never have before in my life. It’s really enjoyable for me to continue growing soccer in this city. The hope is that this is another step along the way deepening the roots for soccer in this city. This is a soccer city and people love it.”

One thing that is unanimous is the desire for a record 15th Championship. “The goals and the records are great in the moment, but the memories you keep with you are of lifting a trophy. I want that feeling again.”