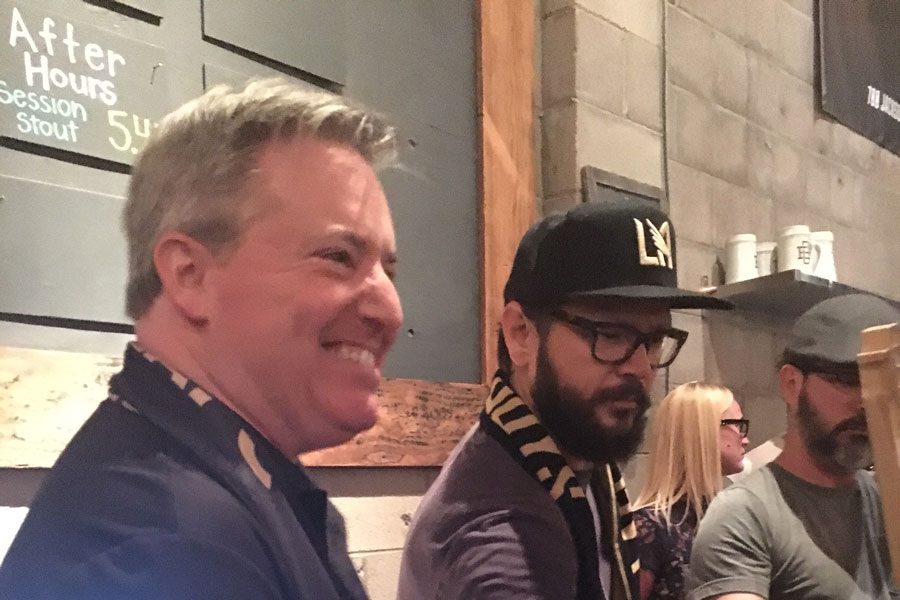 LAFC Supporters Eat, Drink and Get Merry Together at Black & Gold Rally

MLS expansion team LAFC will not take the field until the 2018 season, and with the distance between now and first kick, the club has started throwing social events to bring the nascent support together. On Saturday, the second such event, the Black & Gold Rally, was held at Boomtown Brewery in Los Angeles, with hundreds coming out to drink beer, eat tacos, buy LAFC merchandise, and have a good time.

The special guest for Saturday’s Rally was LAFC lead owner Larry Berg. Berg, with the club since they were announced two years ago, stepped into a larger day-to-day role this summer, and spoke to the attendees at one point, asking them to watch the MLS Cup Playoff games on Sunday. And when a few groans went around the room, he hit his punchline: “We’ll be there in two years.” As you might expect, that led to considerable cheers from the room.

There was a mix of supporters in attendance at the event, with representatives from the club’s various supporters groups wearing their custom gear and posing for photos behind two-pole signs for their groups that were put on the walls of the brewery’s space. But there were also non-affiliated LAFC Originals, too, folks looking to learn more about the various groups (one attendee joked he might choose a supporters group based on the quality of the groups’ scarves) and those happy to support the team but not necessarily interested in joining a specific SG right now. And all were welcome, with plenty of attendees mingling throughout the night.

Berg spoke to SoccerNation at the event, after a stint serving beers to supporters and asking for advice on building the club.

“I love soccer and I love business. But I do business in my day job, and I watch soccer all the time regardless,” he said. “I’m excited about the community, the idea to bring folks together who all love the game, all love Los Angeles. Soccer is a community sport – it’s meant to be watched together. And so to have a place to go and to have these kind of events where everyone has a shared passion, that’s what I’m excited about.”

When asked if Berg had gotten any good advice in the beer line, he responded, “Not yet, just appreciation and excitement so far. I’m sure there will be advice coming down the road.”

Berg also noted that the Banc of California Stadium project, slated to open in 2018, is about a week ahead of schedule “as far as the demolition” of the Sports Arena is concerned. He also touted the project as eventually becoming “by far, in my opinion, the best stadium in MLS.” Those are big words, but Berg was not afraid to throw the gauntlet down.

So while the LAFC first team won’t hit the field for awhile yet, the community building continues apace, and events like the Black & Gold Rally, to bring supporters together, is a great opportunity to find a niche in Los Angeles and bring people together. It won’t be a surprise at all to see events like Saturday’s continue for the next year and a half.