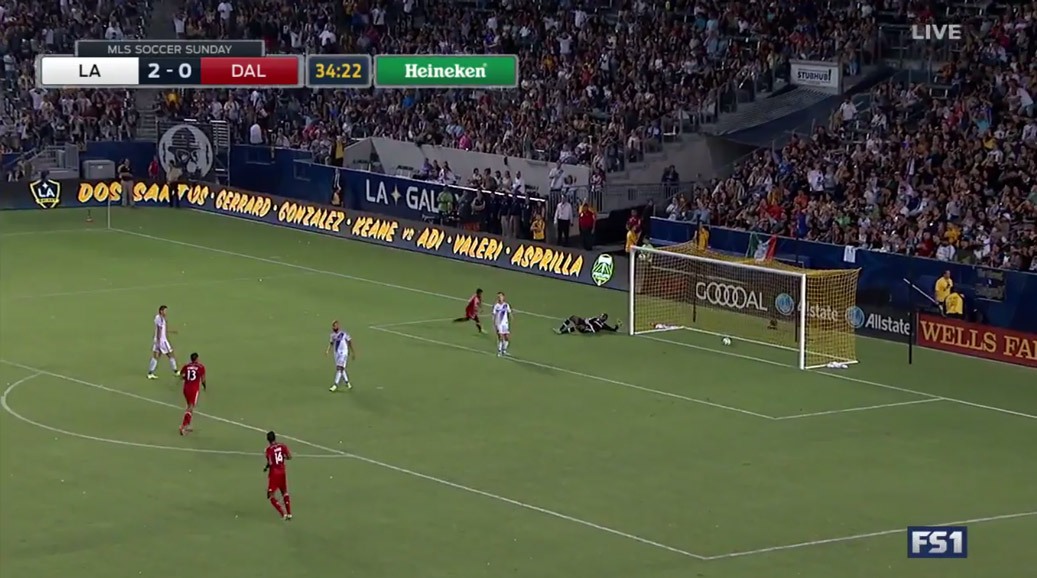 The LA Galaxy put a 279 minute scoreless streak firmly in the rearview mirror in a thrilling 3-2 win over FC Dallas at StubHub Center Sunday night. Goals from Giovanni Dos Santos, captain Robbie Keane, and Steven Gerrard proved enough to overcome a spirited Dallas side who created enough chances to keep spectators on the edge of their seats.

The Galaxy hit the ground running and seized the initiative early in the match. Hawthorne native Gyasi Zardes found Dos Santos to round off a slick give and go move between the Mexican international and Robbie Keane for the first Galaxy goal in the 11th minute. Just three minutes later, Keane and dos Santos again combined in the tightly congested space just outside the penalty area. Keane’s smart curling finish put the Galaxy 2-0 inside 15 minutes.

FC Dallas pulled a goal back after Robbie Rogers failed to deal with a long ball that dropped over his shoulder. Michael Barrios latched onto the bouncing ball and looped a header over Galaxy goalkeeper Donovan Ricketts who was left stranded off his line. Steven Gerrard restored the two goals cushion in a melee following a corner kick that the Dallas defense was unable to clear, before Atiba Harris scored in the 86th minute to thicken the plot.

The win for the Galaxy makes them the first team to hit the 50 point mark this season. The Galaxy have also found themselves leading the race for the Supporters’ Shield, although the Vancouver Whitecaps and New York Red Bulls, and FC Dallas are all within range to overtake the Galaxy if those teams were to win their games in hand.