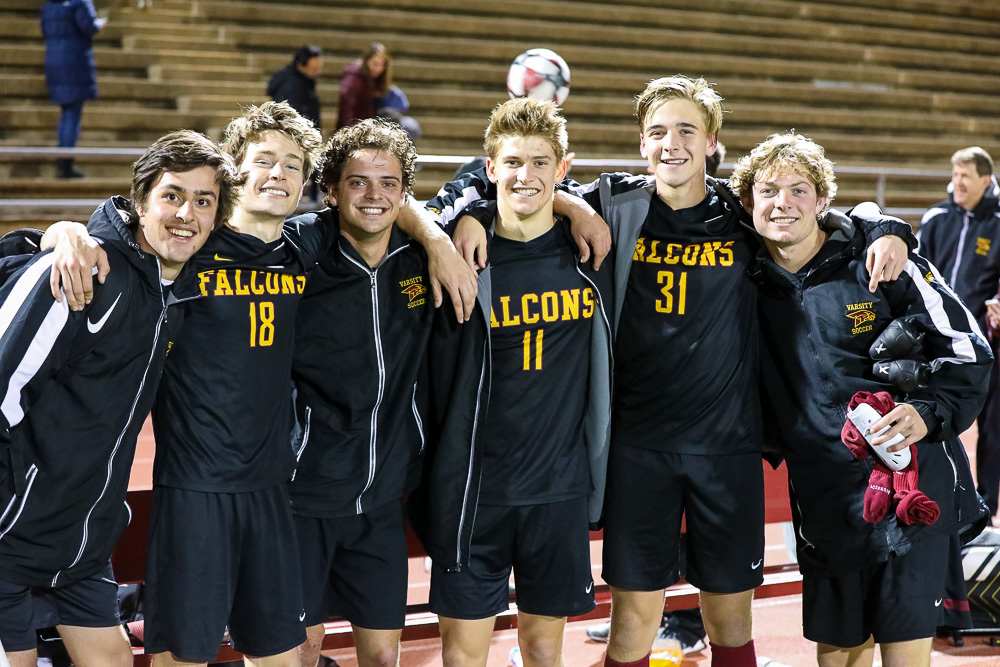 Were there college scouts watching the game?
Maybe. The soccer was definitely good enough.
But there wasn’t a line of college scouts in their folding chairs sitting behind a “Players and Coaches Only” barrier on the sideline.
Parents filled the stands, but they were nearly (or maybe completely) outnumbered by the players’ peers and classmates. If parents were nervously trying to decipher college logos on anyone’s backpack or jacket, it wasn’t as obvious as it is as a competitive club game.

The main focus of everyone at this San Diego high school soccer semi-final wasn’t individual player performance or player development. The main focus was the game. Scripps Ranch High School boys soccer had defeated Cathedral Catholic, a perennial powerhouse, in the quarter-final round to earn their spot in this semi-final. The Falcons of Scripps Ranch were coming into another Falcon nest at Torrey Pines High School, where both teams would battle for a spot in the San Diego CIF Open Division Championship.

As the teams warmed up, the youthful nervous energy was palpable. Both teams’ rosters were enormous. Younger players had clearly been called up from the schools’ Junior Varsity teams to join the Varsity ranks for playoffs. Players who were many years apart in age and physical development warmed up together, scrimmaging and getting each other ready for the impending battle.

The referee began the game, and the Fight of the Falcons was on. Scripps Ranch absorbed early pressure from Torrey Pines and kept the game scoreless with the help of their outstanding goalkeeper and a bit of luck in the form of a few shots veering just wide of the Scripps Ranch goal. The Scripps Ranch Falcons earned a free kick in midfield and converted the opportunity into the first goal of the game. The teams went into halftime with Torrey Pines down 1-0.

“Coach told us we need to be more clinical in our finishing, and that’s what we did.”

After the game, I asked Torrey Pines player Cody Black what the coach told the team at halftime. Black replied, “We were not playing our best soccer in the first half, obviously. We weren’t finishing our chances. That can’t happen. Coach told us that we need to be more clinical in our finishing.”

Finish they did. The Falcons of Torrey Pines High School started scoring seemingly at will. The game ended 5-1 in favor of Torrey Pines. The near misses of the first half were gone. Goals came one after another.

A header goal off a corner.
A dazzling display of individual skill slicing the Scripps Ranch defense to shreds.
Brilliant one-touch passing that would impress any college or DA coach.
Torrey Pines had it all in that second half, and they couldn’t be stopped.

There are quite a few reasons the US Soccer Development Academy bars their players from joining their high school soccer teams. The benefits of high school soccer, however, were on full display at this CIF Semi-Final. The soccer level was top-notch. The stands were full of cheering parents, teachers, and students. The camaraderie between players years apart in age was heartwarming to witness.

At some point during the game, a Scripps Ranch spectator (probably a student) directed a harmless but very loud jab about hair gel towards a Torrey Pines player.

Hair gel??
Yes, hair gel.
And it was hilarious.
The crowd erupted in laughter as the game continued on.
And that’s something that you’ll probably never see at a DA game.

…scroll down for more game pics…