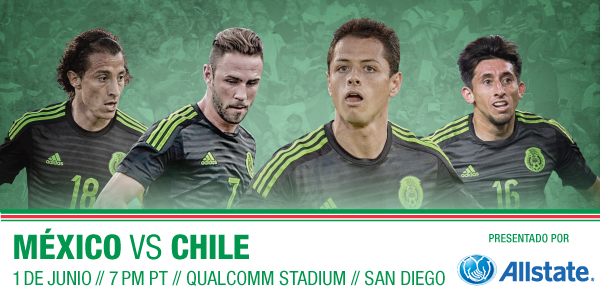 Wednesday night, June the 1st, Mexico will take on Chile at Qualcomm Stadium, in the final tune-up match for both sides before the Copa America Centenario begins later this week.

This San Diego stop-off for El Tri is about more than just a friendly with the reigning champions of South America. The build up to the match is a celebration of Mexican soccer, its heritage, and its prestige.

Public events are taking place at businesses all across San Diego, featuring some of the biggest names in the modern history of the Mexican National Team. It’s all a testament to Mexican soccer culture, and the valuing of fans on this side of the border.

Sunday saw one of the greatest Mexican players of the 90’s and 00’s, Jared Borgetti, mingle, sign autographs, and take pictures with adoring fans at the Home Depot on Fairmount. One of the most intriguing storylines (from a historian’s point of view) coming into the Copa for Mexico is Javier Hernandez (a man we all know simply as Chicharito) currently sitting in second place on the all-time national team goal scoring list. The only man ahead of him is the aforementioned Borgetti, who long tormented defenders from around the world with his aerial prowess and impeccable movement off the ball. Borgetti retired with 46 goals to his name in a Mexico jersey. Chicharito has 43 going into Wednesday night’s match against Chile. Whether it happens this summer or not, Borgetti losing his all-time goals crown is surely an inevitability, but at least he’s got a sense of humor about it.

(translated) “I’m gonna wear that title for as long as I can,” Borgetti said on Sunday. “I don’t think I’m gonna have it much longer.”

In addition to Borgetti, former Mexico midfielder Gerrardo Torrado was in town at a separate event on Sunday. Torrado – who retired from national team duty in 2013 after making an incredible 146 international appearances – still plays professionally in Liga MX, as the captain of Cruz Azul no less. At 37 years of age, “El Borrego” is still a midfield menace, and a man beloved my Mexican fans.

Throughout the late 90’s and 00’s, there were a handful of Mexican players who seemed to truly embody the rivalry shared between El Tri and the United States Men’s National Team. One of those players will be at the AT&T Store in Mission Valley from 3-5 PM on Monday afternoon. His name is Osvaldo Sanchez, and he is one of the most polarizing yet worshiped players in recent Mexican history.

The goalkeeper – who made exactly 99 appearances for El Tri before retiring from international play in 2011 – is both loved and loathed by Mexican fans. Very few players will ever swap a Club America shirt for that of Chivas the way Sanchez did way back in 1999. Very few players will develop the iconic status that Sanchez gained in his glorious nine seasons at Chivas (which coincided with his best spell for the national team), only to leave rather unceremoniously in 2007, and go on to make nearly 300 appearances for Santos Laguna, a club that recently built a statue outside of their stadium in his honor.

He hung up the gloves for good, and retired in 2014. Very few players will ever be as outspoken and brutally honest as Oswaldo Sanchez, and you will be hard pressed to ever find a player, be it a goalkeeper or an outfield player at any position, who wears their emotions on their sleeves the way Sanchez always did. It’s what made him such a legend, whether you loved him or hated him.

“The guy was a beast, and he knew how to get under your skin. I was up in the broadcast booth most of the times he played against the U.S., and I wanted to go down there and fight him. But he was an adversary, and a worthy one. He was a huge part of what made the rivalry so special during that time period.”

After a bit of an anticlimactic departure from El Tri in 2011, Sanchez is all in for his country again, though maybe not in full support of goalkeeper Guillermo Ochoa. Sanchez has made no secrets about his feelings on Ochoa’s standing with the national team over the last couple years.

“If he’s not starting consistently for his club (Malaga of La Liga),” Sanchez said recently, “then he definitely should not start for our his national team.”

The Mexican goalie debate is a fun one to have, and perhaps Sanchez will share his feelings with some fans on Monday who have the courage to breach the subject. The funniest aspect of it all is that all three Mexican goalies on this Copa America roster, (Ochoa, Toluca’s Alfredo Talavera, and Jose de Jesus Corona of Cruz Azul) at one time or another, be it for Mexico or for old Chivas sides, were backups to Sanchez himself.

On Wednesday, the pre-game fan festival taking place at Qualcomm Stadium will see all of these former Mexico stars hanging out around the grounds and lapping up the occasion. In addition to Borgetti, Torrado, and Sanchez, another former Mexico goalkeeper, Adolfo Rios, will be on hand. They will also be joined by one of the most iconic faces (and heads of hair) in not only Mexican history, but in the modern history of North American soccer.

Luis “El Matador” Hernandez will be joining the party on Wednesday. Mexican fans will be hoping that one of their current players could follow in the Matador’s Copa America footsteps. At the 1997 Copa in Bolivia, Hernandez was the leading scorer with six goals. He went on to set a national team record the next summer, scoring four times at the 1998 World Cup in France, the most by any Mexican player in the mother of all tournaments. Hernandez also has great history in Southern California, having played with the Los Angeles Galaxy in the early 00’s, scoring 15 times in 40 appearances for the MLS outfit.

Whether it’s Chicharito, young Tecatito, or any of the other Mexican players on this 2016 Copa America Centenario roster, they are ready to write their own pages of history this summer. What better way to get inspired than being surrounded by legends?