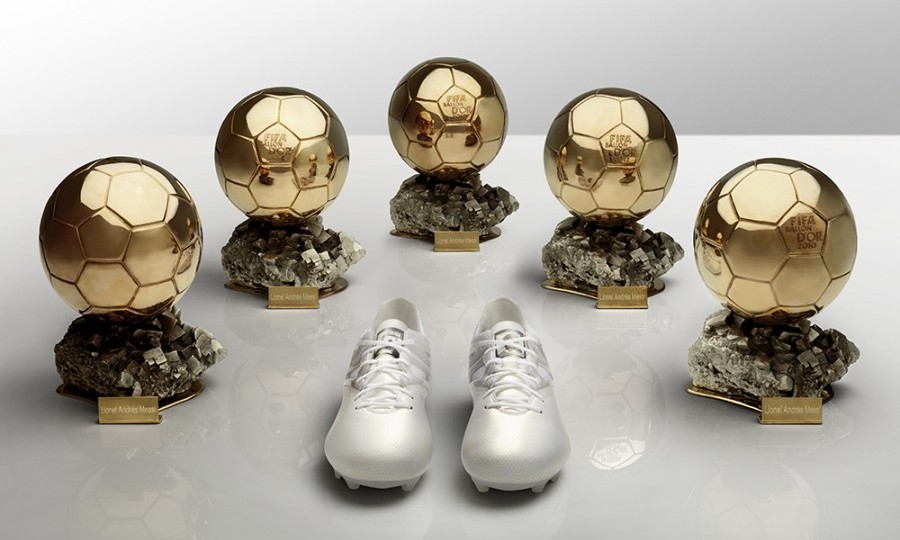 [quote_center]Out of this world. Magisterial. Best in the Universe. Genius.[/quote_center]

Adjectives to define the best soccer player ever.

The best player in world just had his named called for a record 5th time at the Ballon d’Or ceremony, beating out eternal rival Cristiano Ronaldo. Adidas soccer celebrates the massive win over Nike athletes Ronaldo and Neymar in classy fashion. To honor the achievement of arguably the greatest soccer player of all time, adidas Football releases a new colorway of the Messi soccer cleat. All white, embossed with real bits of platinum and gold, the limited edition cleat oozes class of the highest order.

The signature Messi boot, the first unique cleat made for a player by adidas, references all the skill, success and reputation achieved so far in his career. The all white base pays homage to his ability to create goals from nothing; To use a blank space and create an artful masterpiece with only a few touches of the ball. The Messi logo and adidas logo are made from real platinum in allusion Messi’s “out of this world” talent. The preferred left insole of the cleat is embossed with four gold dots and one platinum dot to commemorate the 5 Ballon d’Ors. The right insole reads “el más grande de todos los tiempos” which translates to GREATEST OF ALL TIME!!! #GOAT

Goals. Assists. Close Control. Mazy Dribbles. Relentless. This defines Leo Messi. The new white boot is designed to give players a blank white canvas with which to create the future of soccer.

Will you be wearing the Messi 15.1 boots creating beautiful soccer in 2016? Get them here!