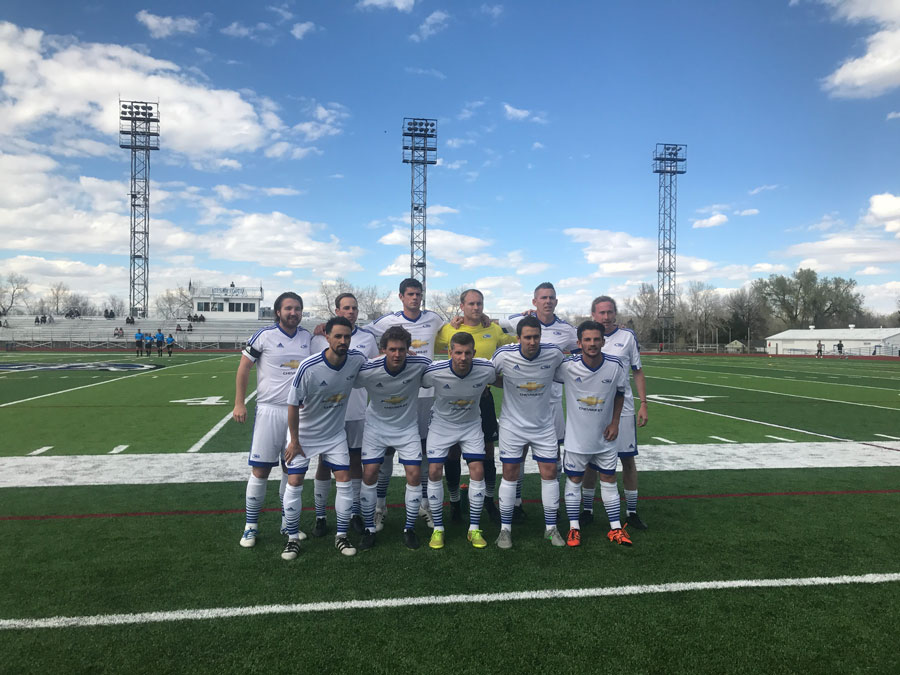 After struggling to close out games in recent weeks, and in need of a win, Rush put together an exceptional performance to win 7-2 against Indios Denver FC to get their UPSL season back on track.

This match got off to a fast start for Rush as in the 8th minute Andrew White buried a shot to the top corner to put Rush up 1-0. Indios put some early pressure on the back line of Rush and tested goal keeper Shailer Thomas who had to push a shot up and over the cross bar in the 18th minute to save the lead. Indios continued to come at goal and in the 20th minute they found the back of the net to tie the game 1-1.

That would be the only time that Indios would find the goal in the first half, as the flood of goals started for Rush. In the 27th minute forward Adam Hudson got behind the Indios back line and set up Danny Woolliscroft to make it 2-1 Rush. Woolliscroft wasn’t finished, no more than a minute later he danced around a pair of defenders and found the back of the net again to make it a commanding 3-1 lead for Rush.

In the last minute of the half White also managed his second goal when he saw the Indios keeper cheating off his line and chipped one over his head from 35 yards out to put Rush up 4-1 at the half.

One change was made to the line up for Rush as Hudson made way for Colin Clark to start the second half. The second half opened up even faster than the first for Rush as White found the back of the net when he caught the Indios keeper cheating off his line for a second time and completed his hat trick with a chip from 30 yards out in the 48th minute.

Indios were gifted a lifeline in the 56th minute when they were awarded a controversial penalty kick that they would score on, despite Rush keeper Thomas putting a hand on it. This would be the final time that Indios would find the goal for the day. They mounted one more attack in the 70th minute and put a solid chance on goal that once again Thomas was up for the test.

In the 83rd minute, the man of the match Andrew White found the net for a 4th time as he snuck past the defense and put a clever toe poke past the Indios Keeper to make it 6-2 Rush.

Rush still weren’t finished finding the back of the goal as late substitute Kevin Uriel Arreola roofed the goalie for a third time in this game in the final 2 minutes of the match.

The match ended 7-2 with Rush winning in dominant fashion and finally closing out a game when they had the lead. Even with the injury to forward Ben Gaido, their offense didn’t miss a beat with Woolliscroft and White combining for 6 goals between the two of them. I was able to sit down with Andrew White after the game to talk about the performance.

SoccerNation: What was the biggest difference in today’s win and being able to close out the match this week than in previous weeks?

White: “As a team, we haven’t been playing together for that long and we are still getting to know how to play together. I think that we really started to mesh this week and understand how each other play. Also, we have had a bad taste from the past three games where we’ve been winning and haven’t closed the games out. I think we just came out fired up for this one and really wanted a win.”

SoccerNation: How did you like playing in the new formation this week and having a bit of a wider role than you have had in previous matches?

White: “I enjoyed playing in the new formation and having a bit of a wider role. I like it because it gives me more space where I can use my speed and I can also see the field much better.”

SoccerNation: You had 4 goals and it seemed like you couldn’t miss, how did you find the net so many times today?

White: “It was just one of those days where I was on.”

Colorado Rush will return home for the first time since their first match and face off against Colorado Springs FC, April 9th at Shea Stadium. They have good momentum going into this match and will look for their 3rd win of the season.