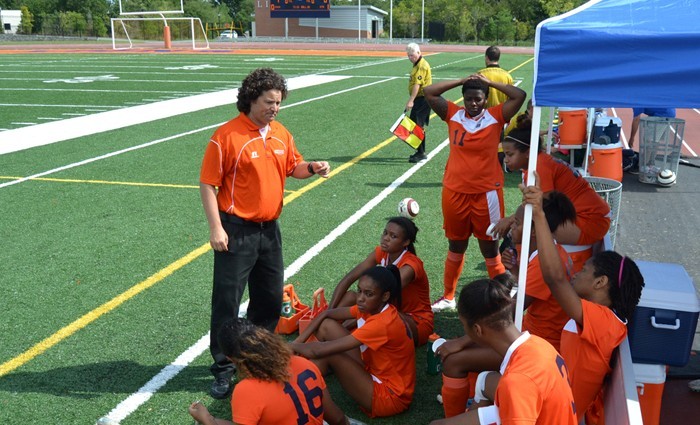 We caught up with Evan Camperell Head Women’s Soccer Coach at the Lincoln University to chat about the college recruiting process from the coaches perspective. Coach Camperell grew up in San Diego and spent time coaching with Surf Soccer Club in 2002 before moving on to coach collegiate soccer

Dike Anyiwo: What do college coaches look for in a recruit?

Evan Camperell: What I look for first and foremost is a strong gpa and whether the student has scored well on SAT/ACT. At Lincoln University, a strong academic pedigree is massively important to gaining admission to the university. Communication is also key. I’ll make an attempt to see student play if the prospect keeps up with regular emails in regards to their game schedule.

DA: How do you feel the general recruiting process has changed over the last 20 years… and even the last 10 years?

EC: Well I’ve been a head intercollegiate level coach since 2003, (JUCO, NAIA, NCAA D3, & NCAA D2). Back in 2003 there wasn’t a lot of email between prospects and coaches. There was nowhere near as much video footage of players available as there is now. There are also more player profiles available today. Previously only certain clubs had public profiles but now nearly every player has their own unique individual profile. Also, new elite leagues like the ECNL help with visibility for top prospects. Lastly, there are more showcase events in general that College coaches are able to scout at.

DA: What general advice do you have for a player starting the recruiting process?

EC: Keep your grades up. These days players also need to know and understand how to market themselves well.

DA: How do College Coaches use grades to infer about a player’s work ethic, motivation, time management, and what type of student they will be in college?

EC: That’s actually a fairly subjective question. A lot depends on a schools background. Ideally all high schools across the country would be uniform in regards to their academic standards but oftentimes that is not the case. There are differences between public and private high schools. Large schools vs small schools. And also the educational support in the actual communities and the strength of school districts all factor into a student’s grades so it’s difficult to assume too much when evaluating a pool with so many variables.

DA: How difficult is it to see every player competing at a showcase?  Do college coaches typically just wander around the field looking for talented players, or do college coaches have a set schedule of players they will be watching at specific times at specific fields?

EC: It is impossible to see every player at any given showcase. I try to see kids who have invited me out to see them play. I tend to attend showcases to look at specific players. I don’t just wander around. I typically set a schedule to view specific games based on the communication I’ve had with my targets. But maybe I’m watching a particular player play, and there are 21 other players on the field during any given game, plus subs, so I always keep my eyes open for top talent.

DA: What advice would you give players in communicating with coaches given the NCAA timelines?

EC: Advice is somewhat case by case. The sooner contact is made the better. An institution like mine is able to “stack” scholarships. A student may be eligible for an academic scholarship and depending on my resources I can add an athletic scholarship on top of the academic. There are deadlines though. Late applicants may jeopardize opportunity to optimize overall financial packages.

DA: What do you think the biggest mistake players make in researching schools to play at?

EC: The mentality that they only want to attend a D1 school. I advise that students tour the campus, view a training session, view a game, and keep an open mind. What is their overall goal? In most cases it is to play soccer in college while gaining the education that will support them for the rest of their adult lives.

DA: After a player has gone through the process, what sorts of things should players take into account in how they go about deciding which school is the right fit?

EC: I think it is important to have a clear picture of what their time at an institution will look like. What are the dorms like? What is the cafeteria set up? Are there extra-curriculars that a student would be interested in pursuing during their college career? The major desired by the student is also very important too. Some D1 programs seek to influence majors but I believe college is preparation to enter the workforce for a long time.

More to come soon in Part II of our interview with Coach Camperell!