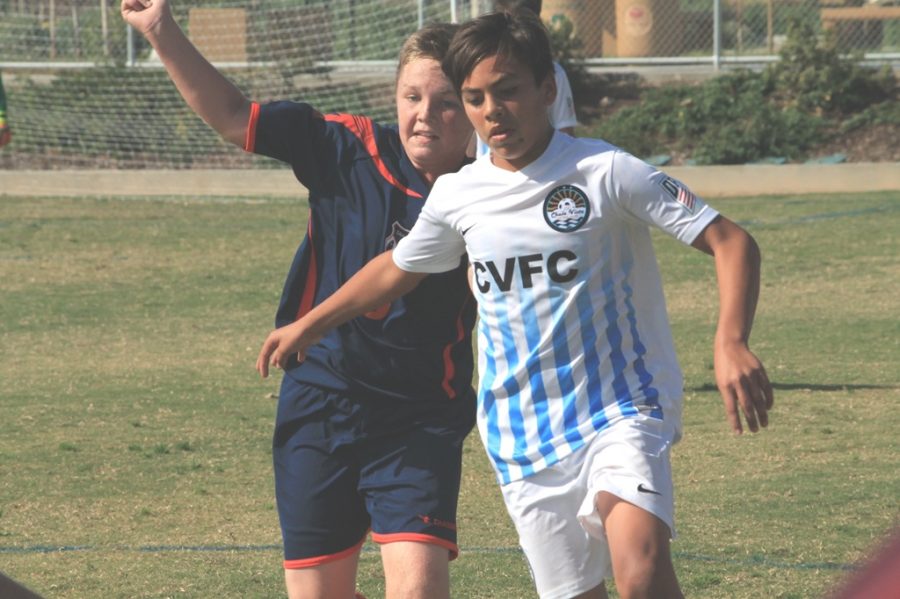 CVFC takes 3 out of 4 USSDA Matches Over Halloween Weekend

Chula Vista Football Club returned to U.S. Soccer Development Academy action on Saturday, October 29th, with two matches against fellow USSDA teams from San Diego Soccer Club. Chula Vista would lose the first match with a late goal by SDSC and even up the tally with a win in the second match.

Shortly after kickoff at Orange Park in Chula Vista, the aggressiveness of San Diego Soccer Club’s players was apparent as they maintained control of the ball for most of the first 10 minutes. Chula Vista rode their luck when a shot from an SDSC forward went wide. It was all CVFC could do to defend their goal and keep the ball away from SDSC’s attacking forwards.

The first chance to score came in the 11th minute, when Rigoberto Arrellano took the ball into the deep right corner and crossed it low into the box for Gabriel Enriquez. Enriquez struck the ball with his left foot straight at SDSC’s goalkeeper.

Jesse Crespo created several chances for CVFC to take the lead. The first, in the 14th minute, with a chip over the goalkeeper that another defender cleared off the goal line. The SDSC defender made it just in time to clear the ball out of the box. The second, following a low free kick from 15 yards, did not get past the goalkeeper.

The score remained even at nil when a SDSC midfielder launched a screamer from about 10 yards outside the box but it didn’t get past goalkeeper David Gallardo who made a remarkable save. The score remained 0-0 at halftime.

Santiago Casillas stepped up in the 2nd half and created several chances for the boys sporting all white kits, but none of those efforts resulted in a goal. The SDSC defensive players were focused on helping the goalkeeper keep a clean sheet.

Fatigue towards the end of the game for the CVFC side resulted in a SDSC goal in the final minute of play. A tough way to lose the game as Chula Vista’s squad had more shots on goal than their USSDA counterparts.

The boys rebounded in the second match on a goal from Francisco Rodriguez in the first 20 minutes. The score would remain the same as they evened the results with a 1-0 victory over SDSC.

Their USSDA training and perseverance paid off as they took two matches from the San Diego Nomads on the next day, Sunday October 30. Final scores were 5-3 and 3-0 respectively with dominant performances in phases of the game.

Chula Vista Futbol Club’s U12 squad will face Albion SC on Saturday, Nov 5th as they continue through their first USSDA season.