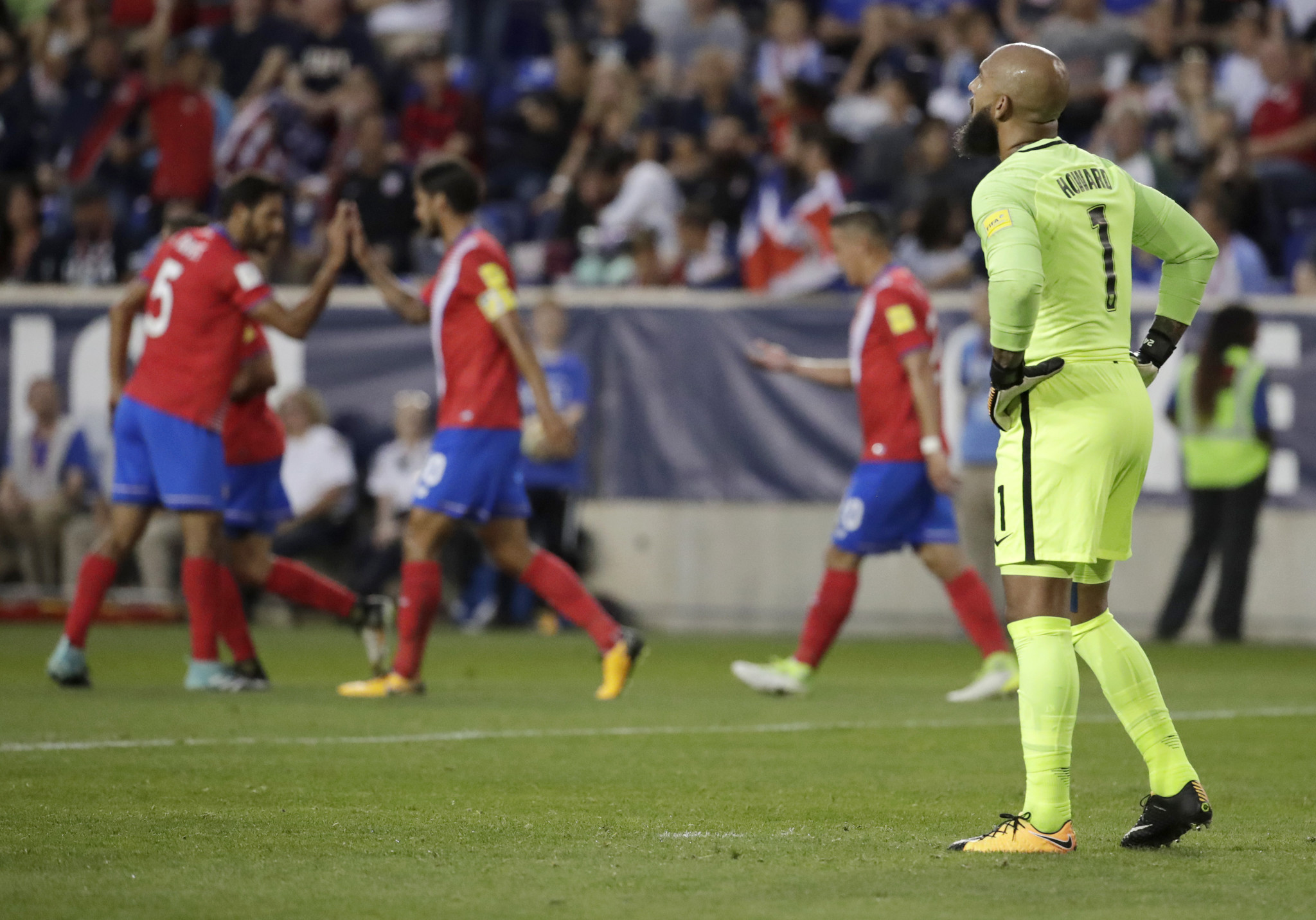 Backs Against the Wall: USA bordering on Crisis Mode after 2-0 Loss to Ticos

What were you focusing on in the wake of the United States’ 2-0 defeat to Costa Rica on Friday night?

Perhaps it was the abysmal performance put forth by the U.S. players and manager Bruce Arena.

“We didn’t make any plays that mattered and we probably were outplayed at most positions on the field,” said Arena. “We made some critical errors. They outplayed us and out-coached us tonight.”

Perhaps you were a little more specific with your criticism of the American showing, and chose to spotlight the disorganized, muddle in the middle from U.S. center-backs Tim Ream and Geoff Cameron, the defensive partnership at times looking like it was made up of two men who had never met one another, let alone played together in a critical encounter for their national team. One of the more obvious mistakes on a night littered with less than satisfactory moments was the defensive positioning on the opening goal scored by the Ticos.

Maybe you watched Friday’s match, took the result with a grain of salt from an American point of view and focused your subsequent discussions on the cool and deadly approach of Marco Ureña. The San Jose Earthquakes forward notched both Costa Rica goals, one in each half, the latter effectively putting the result to bed.

Ureña was pure class against the Yanks, and took full advantage of the porous partners in the center of the opposition backline. After Cameron failed to provide any sort of help to a clearly in-danger Ream on the opening goal, it was the Stoke City man’s giveaway in the U.S. half in the 82nd minute that led to a clinical assist from Cristian Guzman and a powerful finish for the hammer blow from Ureña.

Keylor Navas certainly turned himself into a topic worthy of discussion on Friday night and well into the weekend. The Costa Rica and Real Madrid goalkeeper made two sensational stops in the second half, both preventing an American equalizer with the score still at 1-0. His save of a deflected Christian Pulisic shot in the 67th minute had to go down as the play of the night, the remarkable reflexes showing why many consider Navas the greatest ‘keeper the region has ever produced.

Bryan Ruiz was also in dynamite form for the Ticos, the veteran captain playing his slick brand of soccer that often appears as if he’s gliding on ice skates, effortlessly moving up and down the right wing with the occasional dart into the middle and onto his famous left foot.

In a tactical set up designed for vicious counter-attacks, Ruiz was the perfect man to lead the Costa Rican charge. His assist of the opening goal may have been aided by his handling of the initial ball that came his way, but once the jets were turned on and the eyes were roaming, Ruiz picked out a streaking Ureña from inside his own half and sent him flying toward the final third, Ureña still with plenty of work left to do on his own in the form of taking Tim Ream to the cleaners and embarrassing U.S. goalkeeper Tim Howard with a cheeky finish to the far post.

It was about on-field leadership as much as it was about what Ruiz did with the ball, and overall on the night, there were few individuals more integral to the Costa Rican cause.

Now back to the Americans…

With Costa Rica sitting deep, at times with banks of 5 and 4 behind the ball, the U.S. needed a player with the technical capability to make things happen on the ground in tight spaces. Unfortunately, the one player seemingly capable of just that was left isolated on the right flank, the 18 year-old Pulisic often getting bossed on the touchline by the physicality of the opposition.

Moving Pulisic into a more central position as the match progressed could have helped to break down the stingy and well organized Ticos. Arena seemed uninterested in doing so, eventually removing the young Borussia Dortmund star from the match in the waning moments, replacing him with Paul Arriola, a like-for-like swap of pacey wing presence.

If there is one main criticism to be had in regards to Pulisic, it is that he seems to hold the ball for far too long when playing for his national team. The pace at which the game moves in the Bundesliga forces Pulisic to be quick in decision making, that mental fortitude certainly something that has helped him in his rapid rise up the Dortmund ranks. He is surrounded by world-class talent, and his ability to link up with the fire-power around him has been a marvel to behold. Yet for the U.S., it’s as if Pulisic knows he’s the best technical player in the squad, that confidence perhaps leading to a classic case of reluctance to pass to lesser talented teammates.

There’s one teammate that Pulisic has never looked shy with, and it’s a teammate nearly twice his age. Reduced again to a “super-sub” role, 34 year-old Clint Dempsey was unable to grab the game by the scruff of the neck the way he did when coming off the bench against Costa Rica in the Gold Cup semi-final this past July.

Perhaps it’s time to take the gloves off with Deuce and let him return to the starting XI. With Jozy Altidore suspended for Tuesday’s crucial clash away to Honduras due to yellow card accumulation, Dempsey could very well slot into a forward spot and hit the ground running. It was Dempsey who scored the Americans lone goal in a 2-1 qualifying loss in Honduras in 2013, and we all remember his hat-trick against Los Catrachos this past March in San Jose, California, a night that saw the U.S. win 6-0 with Pulisic countering Dempsey’s scoring total with three assists and a goal of his own.

As the result against Costa Rica settled into the hearts and minds of millions, some folks wanted to talk about the apparent “advantage” gained by the Ticos in the form of Red Bull Arena, U.S. Soccer’s somewhat peculiar venue choice for this home qualifier. Could the hostility of a few thousand opposing fans (about 25-30% of the total crowd) really have played a role in the U.S. performance on Friday?

And while #USMNT didn't lose because of venue, @ussoccer didn't provide team any advantage by having game played in NJ. #USAvCRC

WCQ should not be viewed as a $ maker. Get to the WC. End of story. Create home field advantage. "Ole" chants were awful all night.

The sentiment seemed laughable to some.

This entire discussion about the crowd at RBA reminds us how mentally weak and fragile many in/around American soccer remain.

There was plenty of talk about the venue, probably too much. There were critical conversations about Bruce Arena’s squad selection and tactical naivete, and the manager’s overall ineptitude when it comes to the strategic side of the modern game. There were jokes about Jurgen Klinsmann, how this result was somehow his fault. There was ample discussion on Ream and Cameron’s nightmare in New Jersey, and there was, rightfully so, plenty of complimentary words for Marco Ureña, Bryan Ruiz, Keylor Navas, and Costa Rica Manager Oscar Ramirez, among others.

There seems to be this one storyline however that is not being examined nearly enough, and maybe that’s due to intense fear or perhaps an out and out refusal to accept reality. That “storyline” is the current makeup of the 6-team hexagonal table in CONCACAF World Cup Qualifying.

With three games to go, the U.S. have their backs against the wall. As fans and media members alike spiral down the rabbit hole of hypothetical outcomes, the U.S. players and coaches know that Tuesday’s match in Honduras now holds a bit more importance. If the Yanks lose in San Pedro Sula, and Panama win at home later that night against last place Trinidad and Tobago, the U.S. will be on the outside looking in for Russia 2018, with the top three finishers securing automatic qualification and the fourth place finisher entering a home-and-home playoff with the 5th place side from the Asian Football Confederation.

Wouldn’t it be fitting for this drama to go down to the final day, with the U.S. being rescued by Mexico, much in the same fashion in which “San Zusi” and the Yanks saved El Tri back in October of 2013, when the region’s historic giants were seconds away from missing out on World Cup 2014 in Brazil before the Americans stunned Panama, allowing Mexico to back into a fourth place playoff spot and an easy two-leg win over lowly New Zealand.

Arena and his team are hopeful that they can still take care of business on their own. They are more than capable, both in terms of talent and hexagonal mathematics. But with anything less than three points in Honduras, the U.S. might want to keep things on the safe side and start praying for the saving graces of the saints of 2017.

(Stay tuned to SoccerNation.com for more coverage of the USMNT and CONCACAF World Cup Qualifying. Follow on Twitter @Soccer_Nation.)