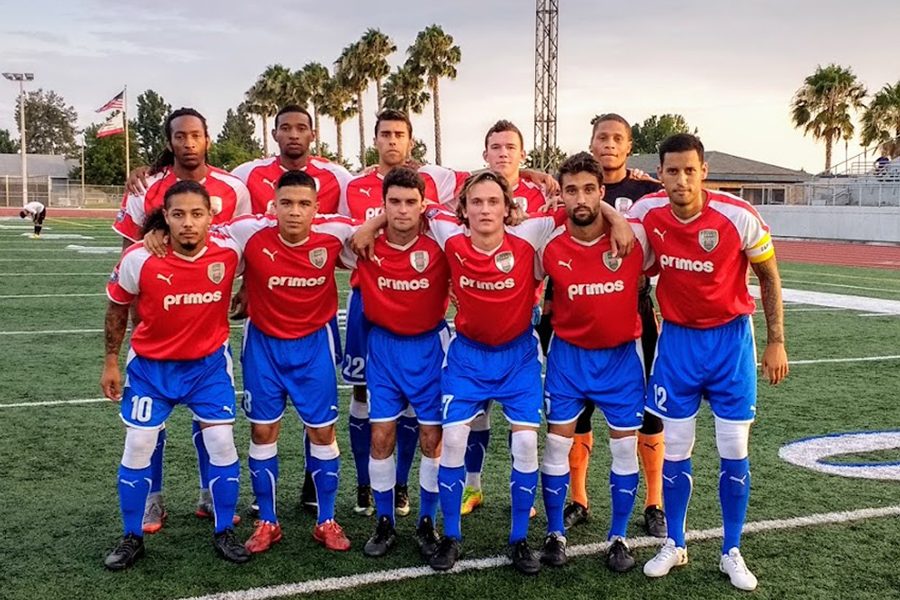 The potential for the classic cliché associated with these types of matches was there, albeit briefly. A top club taking on the bottom of the table squad that has nothing to play for but somehow manages to play spoiler is a narrative many are familiar with. Not this time.

Only 15 minutes had elapsed before the net rippled, and it would dance a total of eleven times before the whistle at the end of 90 minutes of play.

The tandem that has been quietly smoldering for weeks caught fire early in this game and was trailed by the smoking ruins of the Corinthians back line with every advance into the final third.

Tre Hayes linked up with current league leading goal scorer Amani Walker for his first of the night in his pursuit to the NPSL Golden Boot.

Just five minutes later, Hayes was rewarded when he notched another goal courtesy of an assist from Felipe Liborio who was back in the starting eleven alongside PROS homegrown player Townsend Meyer.

In the 22nd minute, Sean Callahan would make his presence felt adding a strike of his own. The pace was quick and the PROS were sharp. A few hard tackles began to make a presence as the heat on the field matched the heat in the atmosphere around Chino High School Stadium on a muggy and heavy day.

Hayes was back on the score sheet in the 30th minute after being awarded a penalty which he duly dispatched, taking over from Walker who had an attempt saved the previous week.

4-0 read the scoreboard at the end of the first half. The PROS were able to get some goals and continue to work on tactics for the incoming playoffs.

The second half was a mirror of the first with its own quick start. Luan Oliveira found Amani in the 58th for the 5-0 and his second of the night.

Commencing the 64th minute, the PROS went clinical in front of the net, try and keep up. Tre Hayes sealed his hat-trick via service from Michael Turner who has a knack for assisting up top while playing as a center back. Few can match Turner’s overall pace over a full 90 minutes, and he will definitely be a key component if this PROS side is looking to make a deep run in the playoffs.

The 66th minute brought us another Amani Walker goal and another assist from Tre Hayes, bringing Walker’s total to 16 for the season.

Just three minutes later, Walker won the PROS another penalty and decide to make it his own, this time he would not miss and find the back of the net once again.

Amani Walker went on to find the back of the net two more times before the full 90, bringing his total to six strikes for the night. As far as the hunt for the Golden Boot goes, it gets a bit tricky. A total of 18 goals were credited to Walker, which is the joint-highest amount in the NPSL, matched with the Southwest Conference’s Tomas Alessandro Canale from Orange County FC.

Even the 90th minute has sixty seconds, and Tre Hayes took advantage as he found his fourth of the night in the dying embers of the game to cap off a landmark 11-0 win. Albion took the match with every ounce of seriousness that a defending champion should.

“We came out with a goal in mind of a strong start as we knew we were going into playoffs next week”, said Man of the Match Amani Walker. “The team was really focused to accomplish the objectives set by (head coach) Ziggy (Korytoski)”.

Finessing the final details for the squad was of massive importance as was getting the romance with the goal. Overall, the game was an excellent outing for an Albion squad looking dangerous coming in as the 8th seed in the larger Western region.

“I think we’ve put ourselves in a great position going into the playoffs next week” concluded Walker.

Up next, the room for error is zero. The PROS will travel to face top seeded and undefeated FC Arizona. Early in the season, Albion made the trek out to John Riggs Stadium where they suffered a 0-1 loss, yet this was when the side was facing a difficult run away from home. Albion earned a point when Arizona came to Mission Bay Stadium and haven’t lost since, ending the season 10 game unbeaten.

An enticing third round awaits on July 14 when the sides meet up once again in the West Region playoffs.