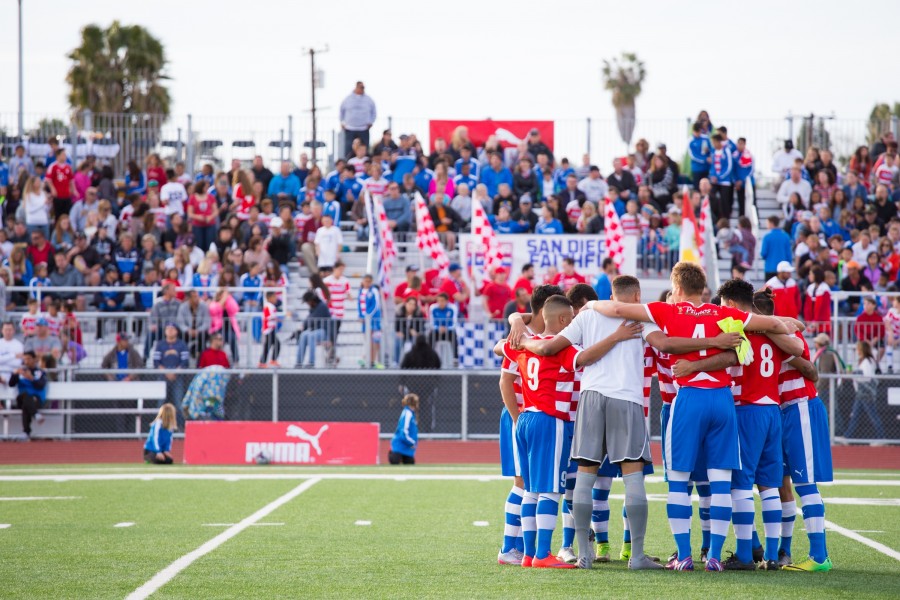 You could feel a buzz in the air at Mission Bay High School this past Saturday. People were chanting and flags were flying as a crowd with red and white stripes started to gather in the stands. The faint smell of Primos Mexican Food and salty air welcomed fans to their seats. Then the drums started to beat as music played over the stadium speakers. People were excited to see the show. Saturday afternoon was the inaugural home game for the

Saturday afternoon was the inaugural home game for the Albion Pros, San Diego’s professional outdoor team, versus Real San Jose from San Jose, California. More than 2,000 people filled the stands as G-Form sponsored skydiver Matt Blanket parachuted down to the halfway line to deliver the official NPSL Mitre Game Ball. Shortly after, players from both teams took the field to kick off the much-anticipated match.

It was almost a dream start for the Albion Pros wearing their red and white hooped Puma jerseys. Winger David Luquen fizzed in a cross from the right to Felipe Liborio on the back post who missed the early chance just wide. The Pros continued to pressure for the next twenty minutes. The excitement emanating from the stands could be felt on the field as the Pros hustled after every ball tirelessly. Then about fifteen minutes into the run of play, we had an injury stoppage as forward Jonathan Zurrita collided heads with a San Jose defender. The stoppage allowed San Jose to regroup a little and quickly countered off a poor corner. In a two v two situation, the San Jose forward could only shoot straight at goalkeeper Jean Antoine’s hands. Albion Pros immediately went back onto the offensive as Ata Ozbay, David Luquen, and Oscar Ortega all took half chances that would not trouble the ‘keeper. Luquen and Liborio had the better of the chances. The score could have easily been 3-0 going into the halftime break, but it was not meant to be.

As the teams took the field in the second half, the Albion Pros made two substitutions up front with Jonathan Zurita and Ata Ozbay coming off for forwards Marquis Brooks and Douglas Andrade. They were meant to bring on a spark for the misfiring forwards in the first half. Brooks flexed his hold up play early and often as he tried to combine with midfielders Ortega, Liborio and Luquen. However, nothing would line up for the forwards to take a decent shot as Real San Jose would quickly close on any shot attempt. Nerves could be felt in the stands as they awaited the opening. Finally, in the 80th minute it seemed the breakthrough would happen. Unfortunately, it was for Real San Jose as the referee had called a very dubious penalty against defender Kuba Waligorsky for an unsuspecting handball in the box. The Real San Jose forward stepped up to slot away the penalty with his left foot. But NOOO! Keeper Jean Antoine guessed correctly and used his entire 6’3” frame to dive to his right and parry the shot out of harms way! The crowd erupted with joy (and relief) as Antoine saved the penalty. The Deep End Supporters Group banged their drum feverishly to encourage the players to find an opening against the staunch Real San Jose defense. A couple minutes later, the Albion Pros scored the crucial game winner with a fantastic team move. Captain Luke Staats streaked down the left flank and put in a titillating cross into the far post, but it was over Brooks and Andrade’s head. Luckily David Luquen made the far post run and laid the ball off to the penalty spot as Felipe Liborio slotted the ball calmly into the back post on the ground. Scenes of jubilation ensued with Felipe Liborio and all 11-outfield players running over to celebrate with the fans in the stands. A moment of pure joy etched forever into the memories of over 2,000 people.

When play resumed, the Albion Pros searched for a second quickly thereafter, but a tired Real Jose defense began to show their frustration in stopping the Pros. Defender Luis Leal would see a second yellow card and subsequent RED Card in the 90th minute for taking down James Yamane who was streaking on right sided counter attack. The referee blew the whistle shortly thereafter capping off a memorable first game for the Albion Pros. Over 2,000 fans gathered to take pictures and get autographs from the players afterwards as celebrations carried on. Head Coach Ziggy Korytoski was presented with the G-Form inaugural game trophy and addressed the crowd to thank them for the electric atmosphere.

Next week, March 12th the Albion Pros take on local San Diego rival and recent US Open Cup success story Chula Vista FC in their second exhibition match of 2016. The game is at 5 p.m. at Mission Bay HS Stadium (2475 Grand Ave. San Diego, CA). Get there early to be part of the action! #WeAreAlbion

You can purchase tickets at prosoccersandiego.com. Come see the best soccer in town!