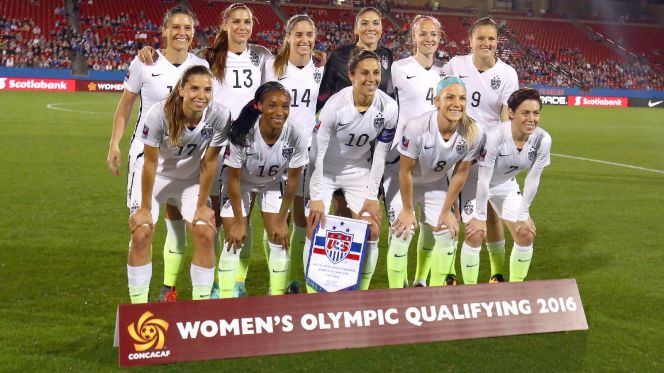 The United States Women’s National Team’s (USWNT) quest to become the first squad to win the FIFA Women’s World Cup and win a gold medal the following year kicks off tonight in Brazil.

The USWNT has dominated the women’s game at the Olympics since the introduction of Women’s Soccer in 1996. Except for a runner-up finish in 2000, the USWNT has won gold at every other Olympic games.

Included in this year’s roster of 18 players are four California natives. They include forwards Alex Morgan and Christian Press, midfielder Megan Rapinoe, and defender Whitney Engen. Morgan and Rapinoe were both on the previous Olympic squad that won the gold medal at the 2012 London Olympics.

This year’s route to Olympic Gold could be a daunting one as the USWNT have been played in Group G with France, New Zealand, and Colombia. All three of these teams are ranked in the top 25 in the world and have at times given the USWNT a run for their money.

That being said, the USWNT enters the match flying high in 2016. The squad is undefeated in its last 15 matches and has previously defeated France 1-0 and Columbia twice on a combined score of 10-0.

The real challenge for the USWNT will be the knockout rounds. If they win their group they will face a third place finisher from either Group E or F. If they win that match, they could potentially face hometown favorites Brazil. Most people will welcome this, but a motivated Brazil will nonetheless be tough to defeat.

With three matches in seven days and a hefty traveling schedule (similar to the U.S. Men’s National Team at the Word Cup), it may seem like a tough task. But who are we kidding. The USWNT has been one of the most dominant team squads in Olympic history and they should repeat as champions.

Below is the group schedule for the USWNT: