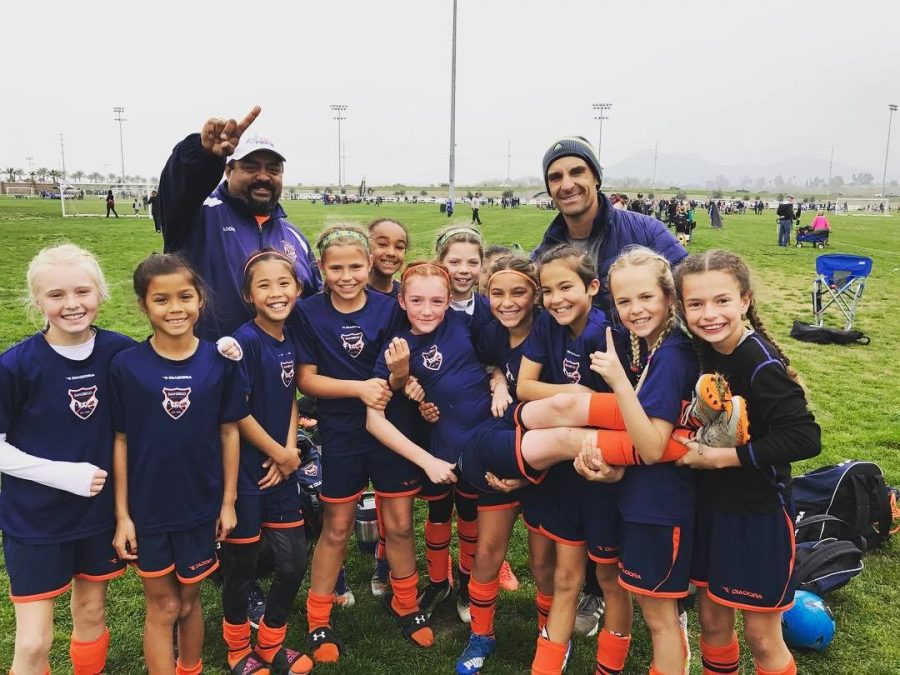 In the latest edition of the SoccerNation Club Spotlight, we remain to San Diego for a thoughtful exchange with Peter Stogsdill, the Younger’s Girls Director of Coaching at San Diego Soccer Club. Peter is a well known personality in the local soccer community, and it was fascinating to learn more about his soccer background, the formation of SDSC, and the current trends affecting youth soccer in San Diego and across the rest of our soccer nation.

Dike Anyiwo:  Tell us a bit about your club Peter. When was it founded, who founded it and why?

Obviously, in a merger of that size there were many others involved in the bringing together of the two clubs but the original idea stemmed from the 4 DOC’s coming together to see if they could put something together that would be better for the kids of both clubs.  This was in an era, that still exists now, where many new small clubs are popping up all over the place for a myriad of reasons.  Our logic was that by being a bigger club we could provide better opportunities for all of our players.

By combining forces our top level teams and players were able to come together and make stronger teams which would give them less reasons to move on to other clubs. On our entry level teams it gave us more players to keep teams together that normally would fall apart as kids moved on to other interests.  We really felt that a larger club was better for all involved.

Dike Anyiwo: Where do your members generally come from?

Peter Stogsdill: Our members come from all over the place.  We have or have had kids coming from Palm Springs, out to Jamul and down to Chula Vista to play for our teams.  However, the bulk of our population comes from the inland corridor made up of Penasquitos, 4S Ranch, Rancho Bernardo, Carmel Mountain Ranch and to some extent Scripps Ranch, Poway and Escondido.

Dike Anyiwo: What is the set-up of the organization?

Dike Anyiwo: Tell us a bit more about your role with your club. How did you come into it?

Peter Stogsdill: My official designation in the club is the Younger Girls Director of Coaching.  However, between the 4 DOC’s we work together at pretty much all levels.  Raffi Ruotolo and I make most decisions on the girls side of the program and Seamus McFadden and Brian Quinn make most decisions on the boys side of the program. I became the Director of Coaching for PQ Premier back in 1995. I had been coaching for Scripps Ranch and Mira Mesa Rattlers for years working as a coach who was not getting paid. One year I was contacted by both Surf and Encinitas Express to come coach at their clubs. I chose to work with PQ as I knew a couple of other coaches there.  Within a year they hired me on as their Director of Coaching and I have been doing it ever since.

Dike Anyiwo: San Diego Soccer Club has grown rapidly in recent years. What do you put that down to? How many teams and coaches are part of SDSC today?

Peter Stogsdill: I think there are a couple of factors that have helped us grow over the last few years.  First of all, we are a pretty well run organization with a lot of great people working behind the scenes to provide a great experience for our families.  We have a strong dedicated coaching staff that works hard to develop players. We have a coaching staff of right around 60 coaches.

We have coaches who have experience coaching at the professional level, college level, high school level and the highest levels in club soccer. We have coaches who excel at various ages and we are able to place them in areas where they will succeed and be able to provide their players with a great experience. Let’s face it, some coaches are not meant to coach 8-10 year old kids and others want nothing to do with coaching kids who are high school aged kids.

We have a diverse coaching staff that allows us to put coaches where their strengths lie. Our current competitive registration is over 1200 kids. I also believe that another reason we have grown is the US Soccer mandate to change to birth year registration. As a larger club, we were better equipped to handle that move. We worked extremely hard to make sure we made the transition as smooth as possible but I think that change benefited all of the larger clubs and hurt many of the smaller clubs.

Dike Anyiwo: How would you describe your relationship with clubs across the San Diego community?

Peter Stogsdill: I think as a whole we have a pretty good relationship with most of the clubs in San Diego.  There are always going to be some issues here and there between different clubs because we are all in competition with each other.  However, it helps that we have Brian Quinn as one of our DOC’s as he is an icon among soccer people in San Diego and garners a lot of respect with others. I personally have worked with a lot of other DOC’s in this area and get along with just about all that I have worked with. We may have some philosophical differences and not always like the way some business is done, but I have a healthy respect for what many of them have done for their clubs.

Dike Anyiwo: What do you make of the youth soccer landscape in America at the moment?

Peter Stogsdill: Youth soccer in this country is getting stronger and stronger every day and I love that. What I don’t think is good is that I feel that everyone is trying to capitalize on that and find a way to make money off of the families that play. Having all of the different leagues that seem to be popping up each year is crazy. There needs to be more enforcement and guidelines from the parenting body on what soccer should exist in this country. Right now we have the alphabet soup of soccer leagues all over the place and no one at the top putting an end to it. Youth soccer in other countries follow direction from the one governing body of soccer.  In this country we have US Soccer doing one thing, US Club Soccer doing another, USYSA doing another. I am sure there is still more to come.

Dike Anyiwo: What do you think are the greatest challenges to your club specifically?

Peter Stogsdill: The greatest challenge to our club is balancing the effort to compete at the highest levels with being a community based club. In this day and age, soccer clubs are spending tons of money on things to market themselves and make people believe that they train, develop and showcase players better than anyone else. Our club fights everyday with the challenges of spending money to compete vs. remaining true to your community.

Dike Anyiwo: what about challenges to youth soccer in general?

Peter Stogsdill: Finances. It’s getting more and more expensive for kids to play soccer. One of the ideals of the USSDA was to find ways to keep costs down for the players playing in the USSDA.  All that really does is raise the costs for everyone else because they have to supplement those expenses.

Dike Anyiwo: What excites you most about youth soccer?

Peter Stogsdill: Helping and seeing young players develop a passion for the game that I developed when I was a youth.

Dike Anyiwo: What do you make of the potential for professional soccer leagues expanding into San Diego?

Peter Stogsdill: I think it is awesome that we may be able to get an MLS team here in San Diego. However, I was a huge Charger fan, so getting an MLS team at the expense of losing the Chargers is still extremely painful.

Dike Anyiwo: How do you define success?

Peter Stogsdill: I think I define it as working every day to improve and be the best person that you can be. Even with my teams I try never to define success by whether we won or lost on the field. At times, especially in soccer, you are not in complete control of whether you win or lose a game. However, you are always in control of how you handled the challenges that arose, how much effort you put into it and whether you improved because of the experience.