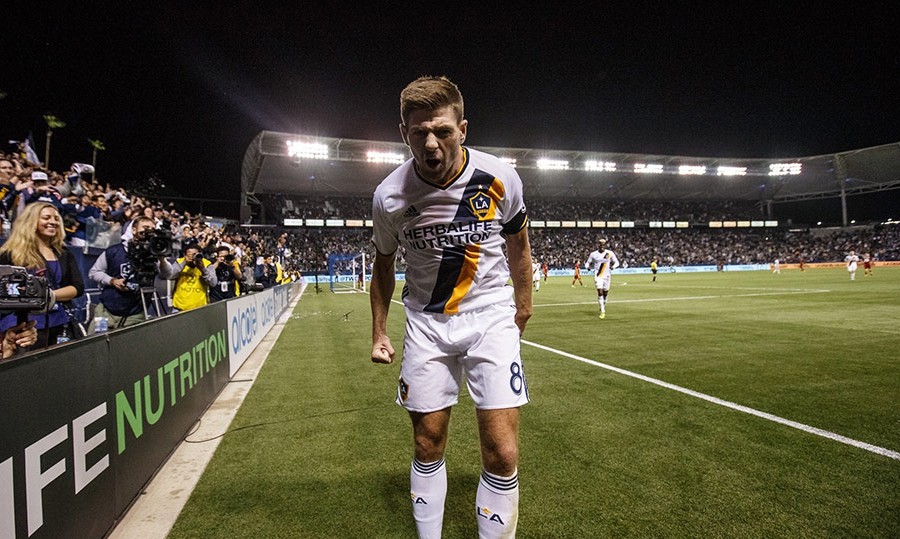 Big weekend in Major League Soccer as we have a new team holding down first in the Eastern Conference. The Rapids are second in the Western Conference, the Galaxy crushed RSL and San Jose picked up an important victory. Below are short recaps with links to highlights for this past weekend’s action.

LA Galaxy (5) vs. Real Salt Lake (2) – Watch Highlights
The Galaxy crushed Real Salt Lake on Saturday, thus ending Real Salt Lake’s run as the final undefeated team. Real Salt Lake jumped out to a decent start when Juan Manuel Martinez headed home the first goal in the 16th minute. However, it was all Galaxy after that. Gyasi Zardes equalized in the 19th minute after he accepted a pass between RSL’s two center backs. He took a touch and curled a beauty into the far post. There was a Mike Magee as he redirected a cross into the back of the net for his third goal of the season. Newcomer, Emmanuel Boateng recorded his first MLS goal in the 41st minute and Gio Dos Santos capped the first half off with a chip inside the box from a Boateng pass. RSL managed to cut the lead in half when Javier Morales converted a penalty in the 71st minute. It was all Galaxy still as Steven Gerrard scored his first of the year when the RSL defense practically checked out in the 91st minute.

Vancouver Whitecaps (3) vs. FC Dallas (0) – Watch Highlights
Make no mistake about it. Vancouver at home is always a tough opponent. FC Dallas learned it the tough way in a 3-0 loss to the Whitecaps, who needed this victory. Vancouver was fortunate when a cross was punched out by Chris Seitz. It hit the chest of FC Dallas’ Maynor Figueroa and bounced in for the opening goal. Jordan Harvey doubled Vancouver’s lead in the 63 minute and Keketua Manneh scored the final goal in the 77th minute.

New York Red Bulls (3) vs. Orlando City (2) – Watch Highlights
Someone or something woke up the New York Red Bulls, who on national T.V., picked up just their second win this season. In a very entertaining match, Orlando jumped out to the opening lead when Cyle Larin scored in just the third minute. NYRB then waited an hour before the onslaught began. Mike Grella equalized in the 65th minute and then Bradley Wright-Phillips recorded a brace with a goal in the 69th and 74th minutes. Things for a little too close for comfort when Karl Ouimette wasn’t able to react fast enough to a cross, allowing the ball to trickle in. NYRB held on for a very important victory.

Montreal Impact (0) vs. Toronto FC (2) – Watch Highlights
Toronto FC picked up its second win in a row following a great performance from Sebastian Giovinco who scored on either side of the half. His first goal was in the 40th minute when he stepped up and buried the low penalty. He added his second in the 81st minute on a fortunate deflection that bounced to Will Johnson. Johnson then played the ball into space and Giovinco finished far post.

D.C. United (3) vs. New England Revolution (0) – Watch Highlights
D.C. United, who just two weeks looked to be heading down a very long season, has bounced back with their second one in three matches. Lamar Neagle opened up the scoring with a penalty conversion in the 38th minute. Luciano Acosta sealed the match in the 86th minute and Alvaro Saborio added a 90th-minute goal.

Columbus Crew (1) vs. Houston Dynamo (0) – Watch Highlights
Wasn’t the way they probably wanted to win, but the Crew who are now on a two-match winning streak will take it. Playing at home against the struggling Houston Dynamo, the Crew jumped out to the lead in the 21st minute on a penalty from Kei Kamara. His third on the season. The penalty also saw a straight red shown to Dynamo goalkeeper Tyler Deric. After that, Houston played down a man and could not recover.

Colorado Rapids (3) vs. Seattle Sounders (1) – Watch Highlights
Are the Rapids for real? Time will tell as the MLS season is long and brutal, but for the time being the answer is yes following a 2-1 win over the Seattle Sounders at home. Goal scoring machine, Jermaine Jones recorded his second goal in as many matches while Luis Solignac and Kevin Doyle each scored for the Rapids. Of note, Jordan Morris scores again for the Seattle Sounders.