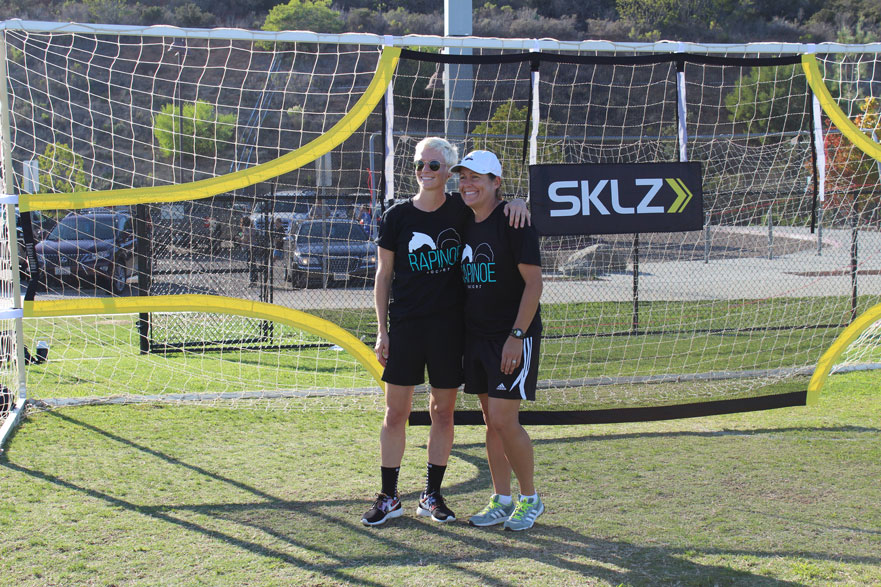 We caught up with United States Women’s National Team star and World Cup Champion Megan Rapinoe just before a soccer skills Performance Training Clinic run by her foundation that was put together in conjunction with the Del Mar Carmel Valley Sharks and Carlsbad based company SKLZ. In an exclusive interview with SoccerNation.com, Megan Rapinoe spoke about why she and her staff chose San Diego as the location for her clinic and how she linked up with the DMCV Sharks.

“What brought us to San Diego? It really was Mac (Sharks Club Director Shannon MacMillan). I was coming to town for a different appearance on Tuesday, and my twin sister Rachel (who is the real boss around here) is always keeping an eye out for opportunities to find ways for us to give back to the soccer community while making it easy on my schedule. The relationship that we have with Mac, I’ve known Mac for a long time, (we went to the same school, so we have that Portland connection), and we knew that she had a club down here  so my sister contacted her and she’s been amazing. The club has been absolutely amazing putting this all on, and I haven’t told Mac yet, but I’m giddy myself because she was one of my favorite players growing up.  and I don’t think I ever told her that but it’s just so cool to be able to come here and do this with such a legend like Mac. She’s one of the best players ever, a player who probably flew under the radar a bit and didn’t get enough credit in her day. She was one of the smartest and most technical players who ever played for the U.S. so we just reached out and made it happen. Hopefully the first of many [Rapinoe Camps] because this has just been so cool.”

The clinic was open to girls ages 10-18, as of October 1 ,  and was organized by  the Sharks but was open to players from outside the club as well. The 150 spots sold out within days of the clinic being announced and the Rapinoe Soccer organization had a waiting list of another 100+ girls who will be first in line for the next event. When asked about whether she would be returning to San Diego for additional camps, Rapinoe told us, “We’ll have to ask Rachel about when, but it has been really cool and very humbling to have so many kids who wanted to come out. We’re also really excited to be here with SKLZ and with the club. We feel like this is a really premium camp for the kids who are getting a really amazing product, plus and they’re getting access to Shannon MacMillan and [retired USWNT player] Lori Lindsay who we brought in as a coach. I would have died to have come to a camp like this when I was their age.”

Rapinoe went on to explain that, “my sister and I are very specific about the curriculum that we want to teach. We teach the brand of soccer that I play and what I think people should play. Without talking too much to Mac about it, I think we have a similar ideas. We want them to develop an understanding of the game. We want them to be technically sound. We want them to learn things now that will make them successful at the highest level. The physical aspect is so emphasized with the young kids but that’s [physicality] not what really gets you to the highest level. That’s not what brings success. It’s about spacial awareness, understanding the game, vision on the field, getting a feel for the game. So that’s kind of our philosophy.”

Rapinoe went on to elaborate on her partnership with SKLZ on the performance side. Rapinoe stated, “if you’re injured you can’t be on the field and if you’re weak you’ll just get pushed around. I like the SKLZ philosophy. I love their philosophy of really digging into what soccer players specifically need. Soccer is very dynamic. You have to be super strong and agile, but you can’t be too big. They’ve done a lot of extensive research into what our soccer-specific needs are.  The training aspect of soccer is a really untapped market. There isn’t a lot of equipment out there so even something like this goal [behind where we are standing] is awesome because it gives you specific targets to aim at and the ball comes back if you miss so I really like what they bring.”

As the training clinic got underway, it was incredible to see how the expert coaches walked the girls through a variety of exercises aimed at teaching strengthening, coordination, and agility, as well as honing techniques for dribbling, passing, and finishing. The SKLZ coaches made a point of educating the campers on why it is so important to warm up before physical activity, how to strengthen key muscle groups, and how to cool down and recover after physical activity to help avoid injuries.

At the conclusion of the training camp, Megan Rapinoe surprised the girls when she announced that one lucky camper would receive a free pair of the Nike Vapor X cleats that Megan herself plays in! soccerloco provided the cleats and Megan herself picked the winner in a raffle. 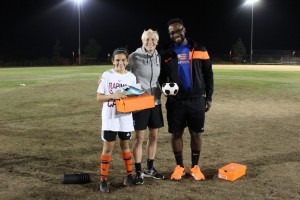 Megan Rapinoe also took the time to answer questions from the girls before taking photos with the campers. The girls were eager to know all about Rapinoe as a person, and some of the questions included:

and many more. Rapinoe was gracious enough to answer all the questions asked and each girl was given a little goody-bag to take home that included an autographed picture of Rapinoe herself.

All in all the event was an amazing success and we can only say thank you to Megan Rapinoe and her camp for taking the time to create such a positive experience for the girls who came out. Thank you to Shannon MacMillan and the DMCV Sharks for organizing the event and thank you to SKLZ for educating the next generation of elite soccer players as they continue to progress in their young careers.