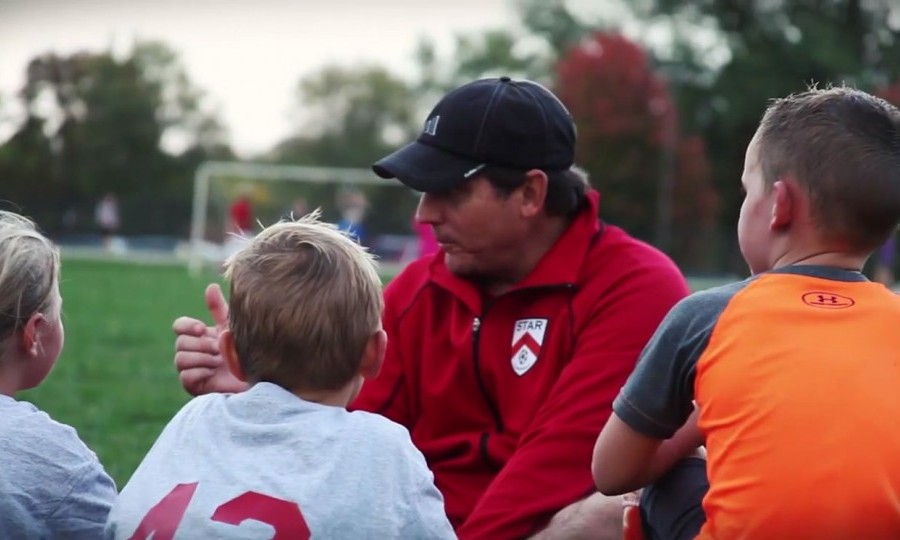 I have gotten this comment a lot in the last few weeks, and as a club Executive Director, and also a coach, the people asking me want to know more than the simple details or logistics.  Most parents asking me are trying to figure how the new field and rosters will affect their children, why U.S. Soccer made these adjustments, and my opinion from a multi-disciplinary approach to player development.

The first two concerns are easy to address.  I will use this article to discuss what it means and why U.S. Soccer chose to do it.  In a later article, we will review my opinion on the changes using educational and sport psychology research.

What the field size changes mean for clubs, players, and parents

U.S. Soccer mandated new small sided standards to be instituted no later than Fall 2017.  Most clubs and governing organizations have chosen to move to these standards sooner than later.  What this means to you as a parent is be a little patient with your local coaches, clubs, leagues.  They may have moved earlier than you wanted, but they may have not had a choice.

To be honest, moving now allows us to work out any bugs and provide valuable feedback to U.S. Soccer during the first year.  See it as ripping off a band aid.  Let’s get it over with and move on with the game.

There may be another pressing reason for moving to the mandates so early. Here in Cincinnati, for instance, we debated waiting until 2017, but the other states around us decided to move to the standards this coming Fall.  We have leagues that incorporate clubs from other states, and our tournaments typically draw from at least five or six neighboring states.  This meant we had to move to the new standards in order to be in compliance with our neighbors.  We don’t begrudge them for changing.  It was going to be done by 2017, but we also were forced to do so no matter how our leaders, or our parents, felt.  This is a simple fact you have to understand.  Your club may have moved to the standards because everyone else has.  We need consistency across the board.

What the new standards require is a change in field sizes and roster sizes for ages U6 through U13.  The rosters will move to mimic the model used in other countries around the world.  U6, U7 and U8 players will play in either 4v4 format with no goal keepers and no offside rule.  This is exactly how many other countries structure playing at the young ages.

The smaller numbers at this age may be a welcome change. I have worked in the “juniors” programs for several years now, and have watched 5 and 6 year-old children play in 6v6 formats with goalies and offside.  Though the game “mimics real soccer”, the children do not touch the ball nearly enough, goal keepers merely take up space, and some players hide.  Usually by hide, I mean they are off in the corner turning cartwheels, or updating their Facebook status because the field is so large and there are so many players they do not need to be engaged.

Smaller numbers translate to more touches, less standing around disengaged, more chance at using the game to learn.  The larger format games usually become kick ball sessions with one team having larger, faster kids who lump it forward, run on to it, and bang it into the goal.  It looks more like what happens on the playground at school with a red rubber ball than on a soccer field with a leather ball.

In reviewing the practices of other major soccer powers the US discovered they heavily weight toward a 4v4 format at young ages. I hope the US strictly enforces this mandate as much as possible and that clubs, parents, and coaches adhere to it.  The idea of letting our children “play” is a hot topic.  I wish more of us would simply do it.

Children learn through play.  We need to give them the freedom to be creative, explore, risk and fail, and adapt to the game.  Removing the constraints of “the real game” also opens up children to be more playful and take more risks.  The 4v4 format is akin to how our generation learned to play basketball and baseball.  Free play in vacant lots allowed us to develop our game without the micro-management that comes with all the intense rules.

I won’t bore you with the details on the rest of the ages because they can plainly be found all over the interwebs, but I will touch on the field sizes versus roster sizes.  These are the following adjustments being made:

My next article will dig into the reduced space and slightly enlarged space of the 7v7 and 9v9 games and whether it is beneficial or detrimental to developing players. 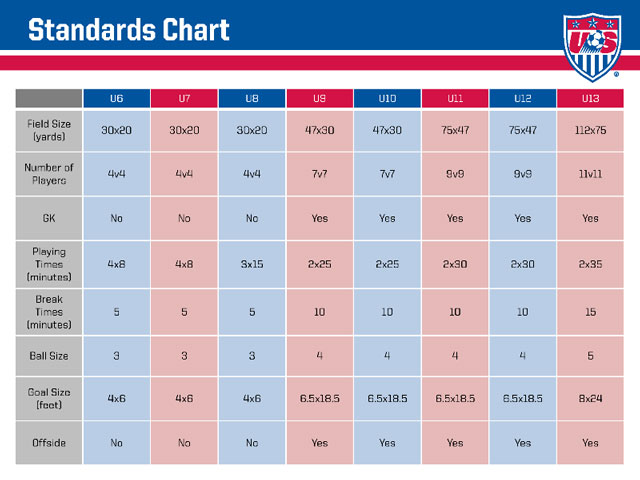 What this means for your child

Every club in every league in every state will follow these standards if they intend to play under the U.S. Soccer banner.  This means your child will be affected.  You can move clubs or even move states, but you will still have to face these changes.  We are all following suit.  If you like your club, stay with it, because every other club will be playing the same rules. There is no need to shop around for a different deal.

This format follows suit with how it’s done around the world.  In a review of other countries, U.S. Soccer discovered most were following a 7v7 and 9v9 format and were instituting small sided games at the youngest levels.  Honestly, the 7v7 and 9v9 format is an easier teaching transition to the 11v11 game.  Going from 8v8 to 11v11 can be awkward in teaching shape and responsibilities of players.  This is much easier to create formations that progress to the full game.

The hopes, for your child, are that we will better develop confident, game-aware players who can compete with international opponents.  The goal is for your child to be a better soccer player through more effective skill acquisition, comfort under pressure, and vision in the game.

Player development is of utmost concern for U.S. Soccer.  Our governing body has recognized the disparity between us and other countries and is working hard to institute ways to close this talent gap.  They thought long and hard about these changes.

When you are trying to develop a system for an entire nation of youth athletes (over 3 million children playing within USYS), you will hit some rough patches and certainly upset a few people.  We may need to be patient and learn as we go. Deciding all is lost before we have even made the changes is too fatalistic a view.  Give it a little time, and let us experts on the field manage the process and provide feedback.

Why U.S. Soccer did this

This is how it was explained to me by someone who was in the meetings.  Of course, it is second hand, so I cannot guarantee total accuracy, but I do trust the source and can see the logic.

“U.S. Soccer felt our children were not good on the ball.  We were not getting enough touches, we are not confident with a ball at our feet, and we don’t play the game fast enough to compete with the world.  If we want to produce the next Messi we need to force better play through decreasing the field size and forcing players to play in tight spaces.  They cannot hide anymore and must be forced to get comfortable under pressure. This will also eliminate the portion of our culture that teaches athleticism and power over possession.  Tight space will require better possession.”

The concept makes some sense.  Tight spaces would create more touches on the ball and force players to get better with their feet.  Confidence will increase as they get more adept. On the surface, this may work out for the better.  Our players will work hard to keep the ball in possession, be forced to get more technically skilled, and become more adept at getting out of pressure.

A player cannot hide as much on a smaller field.  He will be forced to be part of the game, and in doing so, will hone his craft.  The very large fields allow players who are not developing to “slip through the cracks”.  Liken this to a classroom of 35 students with varied educational skill levels.  Some players get a lot of attention and some get largely ignored. The hope is, smaller area, everyone gets attention.

We have seen this phenomenon of development with futsal.  Countries that have used it as a development tool tend to have very technically skilled players with high levels of ball confidence and tremendous vision in the game.  They are quick footed, can work out of pressure, see passing angles better, and want the ball at their feet.

Everything may be all right.

Tune in next time for my opinion on the changes.  I will look at it from an Educator’s and from a Sport Psychologist’s perspective.