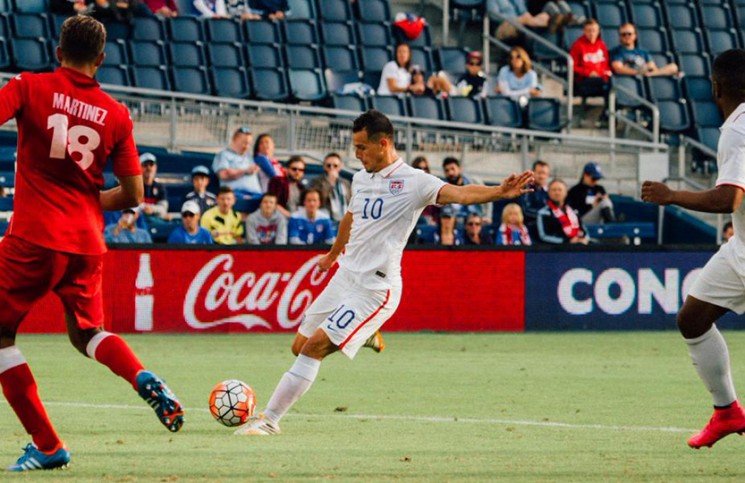 The United States U-23 Men’s National Team is now just one victory away from booking a ticket to the 2016 Olympic games in Rio next year.

The U-23 MNT capped off an impressive run in group play at the CONCACAF Men’s Olympic Qualifying and finished first in their group following a 4-0 win over Panama on Monday night. The U-23 MNT have now advanced to the semifinals and will face either Mexico or Honduras on Saturday night in Sandy Utah.

On Tuesday night against Panama, the U-23 MNT slugged through the first half with a lineup that featured seven changes from the 6-1 win over Cuba on Saturday.

At the start of the second half, coach Andi Herzog went to the bench and brought on Stanford’s Jordan Morris and Jerome Kiesewetter, who both made an immediate impact. Following a Panama own goal, Kiesewetter doubled the U-23 MNT lead in the 53rd minute and Morris added another goal three minutes later. Kiesewetter and Morris are tied for the tournament lead in goals scored with three each.

Garden Grove, California native and team captain Luis Gil added a fourth goal for the U-23 MNT from the penalty spot in the 71st minute. Gil also converted a penalty against Canada in the opening game of this competition.

The U-23 MNT finishing first in their group has, for the time being, salved the wound of the 2012 U-23 MNT, who failed to advance out of the group stage. That wound would reopen if the current U-23 MNT fails to finish the job. The team still needs one more win in the semifinal round to book an automatic berth. If the U-23 MNT drops the semifinal match they can still qualify for the Olympics, but they will then need two more wins; starting with a third-place game and then a winner-take-all match against Colombia in 2016.

Without over hyping the U-23 MNT too much they should be commended on their play in the group stage thus far. They did what good teams need to do against inferior competition, and have defeated all challengers by a multitude of goals. This U-23 team, that has a handful of U-20 players on it, looks set to book a ticket to Rio, and without question, anything less than that is another failed opportunity for U.S. Soccer. Morris and Kiesewetter have been dominant up front, the backline led by Matt Miazga, Matt Polster, and Cameron Carter-Vickers have been solid and the goalkeeper position has two legitimate starting options between Ethan Horvath and Zachary Steffen.

The U-23 MNT cannot rest on its laurels however as the most important game in Olympic qualifying is just days away.

Newer Post
Fox analyst Mariano Trujillo on the stakes of CONCACAF Cup: “It’s the most important game” for Mexico
Older Post
A NOTE FROM THE PRESIDENT!