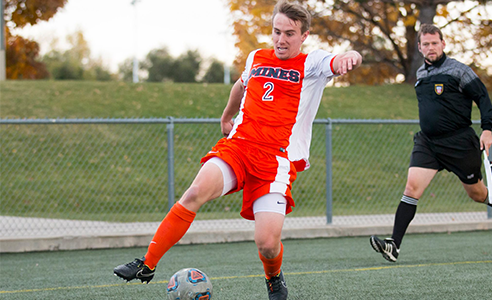 Ending your collegiate career on a high-note is something all players dream of, but not many accomplish it. That dream, however, is alive for a former Legacy defender and now senior defender Ryan Leach, who was just named as the 2015 Rocky Mountain Conference Defender of the Year at the Colorado School of Mines.

Leach, last year’s Rocky Mountain Tournament MVP, has helped anchor a backline that is one of the top defenses in Division II soccer. The Colorado School of Mines defense has allowed just nine goals per game (.50 average per game for fourth-best in the nation) and Leach has tied his college best with five goals scored this year. Leach and the backline have recorded 10 shutouts this season.

The Colorado School of Mines won their conference regular-season title after going undefeated in 17 matches for a 14-0-3 record. Up next for Leach and his teammates is the Rocky Mountain Athletic Conference Men’s Soccer Tournament which kicks off on Friday night against Fort Lewis in the Conference Semifinals at 1:30 p.m. The match will be streamed live right here.