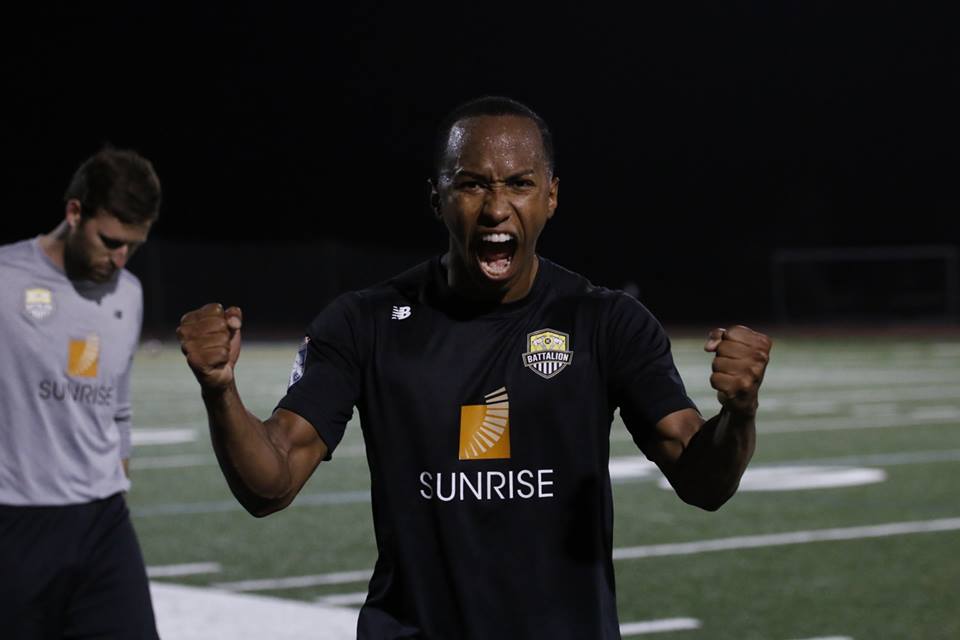 Flippin’ the Script: The Battalion are Back

Script flipping: The act of flipping the script; reversing ones position in life through positive and proactive behavior.

A tale of two games. A story of a team capitulating, collapsing and tumbling down a steep mountain, battered, bruised, and embarrassed, only to find their collective heart, claw back to the summit, plant their flag, and stake their claim of intent.

The opening half hour was the Nelson Pizarro show. The former MLS midfielder scored twice inside thirty minutes, the first on an individual effort that was the footballing equivalent of a stinky block of Muenster; funky, delicate, and delightful. The second was from the penalty spot, sending the keeper the wrong way and slipping the ball over the line with a cheeky brand of bravado that only a true goal scorer could ever fully understand.

Two goals to the good, at home. Cruise control time! Then came the attack of the red quails. Or was it the taking of the Quaaludes? The way the Battalion melted down and fell to pieces, it was hard to tell.

Temecula not only came back to level the score through goals from James Hone-Blanchett (a 30-yard, left-footed thunderbolt that will go down as one of the goals of the season in the Southwest Conference) and Steven Lambert (a crafty finish of a chance that stemmed from some less than desirable defending), gut punches that left the home side gasping, the visitors made it 3-2 thanks to Santiago Warren’s 82nd minute penalty conversion, after Warren himself was taken down by Justin Picou. That was how it ended, and it left a bitter taste in the mouths of players, coaches, and supporters alike.

Flash forward to Saturday night, May the 14th, the next NPSL matchday for North County Battalion. They were home to Corinthians USA, the Brazilian inspired, Rancho Cucamonga outfit, the last place team in the conference, but one of just two teams to take points away from first place Albion Pros. The Battalion, without a win since April 9th, knew that there was only one acceptable result of this affair.

“These are the games that define seasons, when you need a win,” Head Coach Ryan Guy said in the buildup to the Saturday match. “I look at this one almost as a do-or-die type encounter, and I don’t say that to add any unnecessary pressure. The guys know this. We always play to win, and every game is important. But the performance of the players on Saturday night can most definitely be boosted by feeling the gravity of this situation we’re in.”

The Soccer Gods neglected to send any kind of memo to Corinthians about being the sacrificial lambs on the night, and Corinthians clearly forgot that they were the doormat of the Southwest. One player in particular, Matteus Cunha, seemed to be living in a dream world, striking with nightmarish daggers that left North County in shock.

Just five and a half minutes in, the young winger found himself just above the top corner of the eighteen, cutting back on his highly touted left foot. Just about everyone on the pitch and in the stands, including Battalion goalkeeper James Stroud, seemed to be expecting a curling, in-swinging cross to the back post, where several Corinthians players were waiting. Cunha had other plans, and beat Stroud to his near post with a low, whipping blast that grazed off the keeper’s fingertips. 1-0 Corinthians.

Just eight minutes later, Cunha grabbed his brace, a cool, calm, and collected first time finish past the onrushing Stroud, well outside of his box; literally a tap in from 25 yards. The Battalion midfield and back line were nowhere to be found, allowing a thirty yard ball to be played on the ground to a streaking attacker. Lost and bewildered would best describe the Battalion mood in that moment. Lethargic and flat would properly illustrate the rest of their first half performance.

So there they were, the Battalion with their backs firmly pinned against the wall, being pummeled and outplayed, at home, in a game they all had dubbed a “must-win”.

Facing a 2-0 deficit at Del Norte, the Battalion needed three goals and a clean defensive performance for the remainder of the game if they were to pull off a Saturday night miracle.

Sometimes in life, you can find inspiration in the strangest of places.

“It wasn’t too long ago when we saw a team come from two goals down to beat us 3-2,” said one Battalion fan at half-time. “Now it’s our turn!”

Is there anything wrong with taking inspiration from past opposition, especially opposition that broke your heart just thirteen days prior? No, and hell no! It was time for the Battalion to take a page out of Temecula’s book.

Ryan Guy is the antithesis of an authoritarian. He is a general that is stoic in battle, wearing a poker face that often leaves you wondering what he’s really thinking. What exactly he said to his side at half-time on Saturday night is only known by the players, his assistants, and the lone fly on the dressing-room wall. It is safe to assume however, judging by what we saw once the second-half commenced, that Guy’s emotions were not masked on this occasion. A fire was lit. Passion was evident. A different team had arrived.

Thirteen minutes after the restart, Blake Milton brought the Battalion back into the contest with a virtuoso goal that would’ve made the likes of Brazilian legends Carlos Alberto Torres and Roberto Carlos quite proud. Customarily an attacking option who lines up on the wings or in the front-line, Milton was given defensive duties against Corinthians, playing full-back for the first time all season, which in no way meant that he couldn’t continue to pose that attacking threat.

Receiving a pass along the left sideline, close to the halfway line, Milton saw an opening in the Corinthians midfield, and dashed through it, departing the left channel he was calling home for the night and venturing into a more central area. Slicing through his opponents like a hot knife through a stick of butter, his high-speed run with the ball at his feet saw him fly past four different defenders before he found himself in shooting range. One last cut back for good measure, and Milton, from fifteen yards out, placed an exquisite finish with the outside of his left foot past Corinthians goalkeeper Saul Chavez.

The goal said a lot. His celebration said it all. Milton sprinted back toward his half, gesticulating ecstatically to the Battalion supporters, screaming “let’s go” for all to hear.

Eleven minutes later, Eric Lopez sent a long, hopeful ball over the top to Esteban Reyes. Being tugged by a Corinthians defender, Reyes fought to get loose, turned on the jets, and hit a deft, first time chip over Chavez to tie the score at two apiece. The game was suddenly there for the taking, with momentum on the side of the home team.

It was Reyes’ first goal for nearly a month, but that didn’t matter to anyone. The only thing on Battalion minds was getting one more, and getting off the schneid with three massive points.

There was a different feel around the ground. The pot had gone from cold, to warm, to bubbling, and the crowd was ready for a boiling overflow.

Ten minutes from time, Berrick Rastok, wearing the captain’s armband in the absence of Joe Shah, drove a searching ball into the path of Eric Lopez, bound for the left attacking corner. After latching on, Lopez turned toward goal, faced up with a defender, and reached into his reserve tank of high-performance fuel. Three nifty touches and a burst of speed took Lopez past two Corinthians defenders and onto his right foot, inside the eighteen with space to shoot. Could he do it? A low blast to the near post left Saul Chavez flat-footed, rippling the net to give the Battalion a 3-2 lead. You knew he could.

The crowd went bonkers, as did the bench, as Lopez celebrated his third goal of the campaign with a slow motion, Shock G like, Chicken Dance convulsion in front of the raucous “Doom & Gloom” supporters section. The Battalion had come back from the dead, and were just a few minutes away from an improbable win.

Matteus Cunha had one last crack in stoppage time for the visitors, a wild strike from nearly forty yards that went just wide of James Stroud’s right post, which the long armed keeper certainly had covered, not that the effort didn’t make a few hearts stop momentarily. Eric Lopez took the official man of the match honors, but you very easily could have made a case for the Corinthians star. Cunha was simply superb.

The final whistle blew from referee Alejandro Mariscal. Three points were in the Battalion bag for the first time in 35 long, strenuous, and slightly disheartening days. The second-half performance on Saturday night was one for the instant-classic file in the short history of the Battalion, and while it spawned a celebration among supporters that went long into the night, its effects are still not fully known.

“We found ourselves tonight,” Ryan Guy said minutes after the game’s conclusion. “We’re never again going to let ourselves be a team that’s known for second-half meltdowns. We’re going to be the exact opposite. We need to be able to put full games together, and play a strong 90 minutes. But to pull something like this off, and prove to ourselves that we’re never out of a game, it’s invigorating, and has us ready to move forward as a unit.”

Onward! The Battalion now stand at 3 wins, 2 losses, and 1 draw, with 10 points to their name, sitting in third place, just four back of first place Albion Pros. What’s the next task for the team? A trip across town and into Pacific Beach for a highly anticipated San Diego Derby rematch with the aforementioned rival.

Albion came into the Battalion’s house on April 16th and won 3-1. Their players and fans danced on the Del Norte pitch. The stage is set for a reversal of fortune. Mission Bay will be the venue, with payback on Battalion minds. Let’s see if they can flip the script.