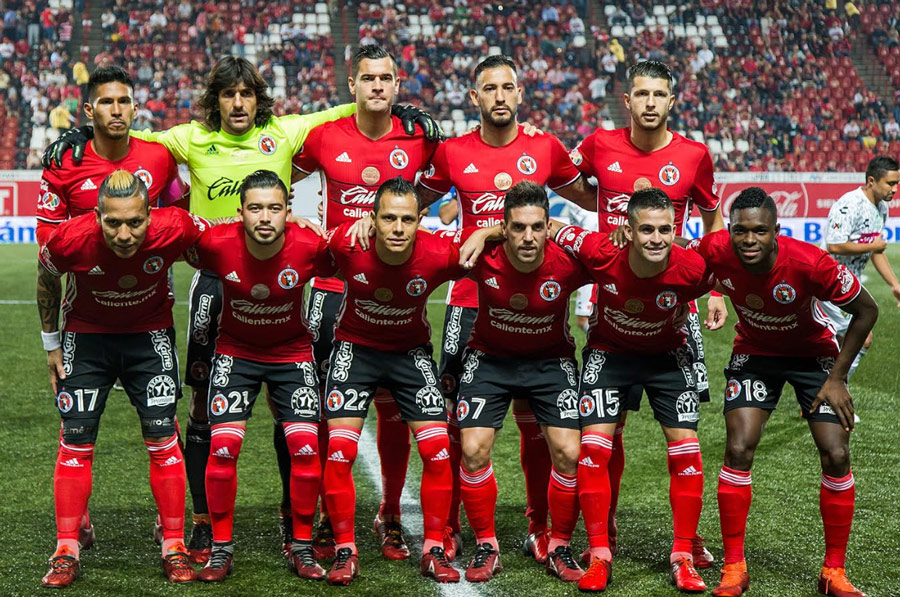 Club Tijuana 2-0 Chiapas: Xolos Are Now Officially in the Playoffs

Thanks to goals from Milton Caraglio and Dayro Moreno, Club Tijuana walked away from last Friday’s match at the Estadio Caliente with a 2-0 victory over Chiapas. With a total of 30 points now in hand, Xolos have also been able to solidify a spot in next month’s Liga MX playoffs.

Following Caraglio’s goal in the 8th minute of the win, there was little that could be said of Tijuana’s opponents, Chiapas. Los Jaguares should be commended for their push to regain possession and create attacking opportunities, but it must be noted that the visiting team struggled to find more than two shots on target.

It was a simple night for Xolos, and one that was also without manager Miguel “Piojo” Herrera. After being thrown out of the previous match against America, Herrera was suspended from taking charge of last Friday’s game — which didn’t stop him from having some fun.

While coaching assistant Diego Ramirez was leading Tijuana’s starting XI on the pitch, Herrera was caught sitting in the stands with fans and was later seen running past the press box with security by his side. Even without a place on the pitch, Herrera still found a way to grab attention off the field with supporters who were eager to snap a photo with the manager.

As exciting as it was to see Herrera in the stands, the true highlights from Friday night were provided by Caraglio for Xolos. Although many have questioned the immobility of Tijuana’s out-and-out striker, the Argentine has been able to win over many doubters with his involvement in both of the goals last week. In his last five starts, the striker now has two goals and two assists for Tijuana.

An in-form Caraglio is a good sign for a Xolos roster that already has its fair share of impressive attacking names. This season, Aviles Hurtado, Gabriel Hauche and Moreno have all proven to have the capabilities to find the back of the net and will be eager to showcase their talent in the upcoming playoffs.

Looking ahead, Herrera and Tijuana still have three more matches left in the regular season. The manager already seems to have his ideal formation and starting XI options, but might want to consider giving a few of his stars a short break before taking part in the Liguilla late next month.

Until then, Xolos supporters should feel thrilled about what Tijuana has been able to accomplish. After 14 weeks of futbol in the Apertura, Xolos have already secured a spot in the playoffs.

Cruz Azul 1-2 Puebla
Los Cementeros have once again found a way to stumble at the last-minute. Cruz Azul was just seconds away from a 1-1 draw but allowed a crushing goal in the 92nd minute. Following the loss, it was announced that Tomas Boy was no longer managing the team.

Monterrey 1-1 Toluca
After racking up a total of 30 shots against Toluca, Monterrey emerged from Saturday’s game with a dismal 1-1 draw. Time is running out for Los Rayados’ talented roster that is losing momentum in the race for the playoffs.

Queretaro 1-1 America
Saturday night’s match ended in an underwhelming 1-1 draw for Queretaro and America. The silver-lining of the result is that America manager Ricardo La Volpe is still undefeated in his short tenure with Las Aguilas.

Leon 3-1 Morelia
Leon is beginning to look like a playoff team. After a terrible start to the tournament, Los Panzas Verdes have now gone seven games without a loss in the Apertura.

Necaxa 3-2 Veracruz
Like Leon, Necaxa is also finding some late momentum in the Liga MX season. Thanks to a game-winning goal from Claudio Riano, Los Rayos have yet to lose a league match since August of this year.

Pumas 1-3 Tigres
Pumas’ undefeated streak at home was snapped after losing to Tigres. As for Los Auriazules, Tigres supporters will be thrilled with the victory after failing to find a win in the two previous league matches.

Santos Laguna 2-2 Atlas
For the second week in a row, Atlas has been able to gain at least a point through a last second goal. Although Edson Rivera’s goal in the 92nd minute was only enough to gain a draw, the point was a necessary one for the team that still has a small chance for a spot in the playoffs.

Chivas 1-2 Pachuca
The best match of the weekend. Both Chivas and Pachuca were eager to show off during Sunday’s clash that featured plenty of attacking movement. After going down to 10 men, Pachuca’s Jonathan Urretaviscaya scored the impressive game-winning goal in the 87th minute.