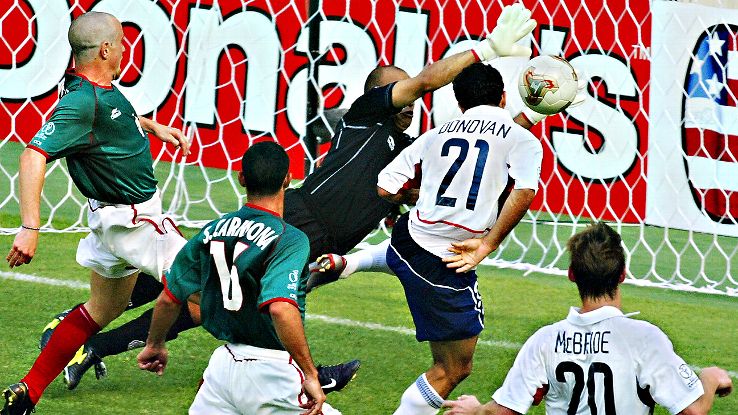 Chips and Cringes: The Two USA-Mexico Matches with the Greatest Power of Annoyance

As we count down the hours and minutes to Friday’s hexagonal kickoff in Columbus, here’s a piece that is sure to be both enjoyed and despised by United States and Mexico fans alike. Let’s call it a kind reminder of the importance of duality in this life.

In the season of polling, we asked supporters of both country’s national teams to give us their favorite editions of this great rivalry since the turn of the millennium. The results varied, with votes cast by men, women, and children for a host of different matches. However, two encounters predictably led the way, flying past the rest of the competition. They are two games that can get deep under the skin of fans, as well as the players who took part.

We start with the pick of the Mexican glory bunch. 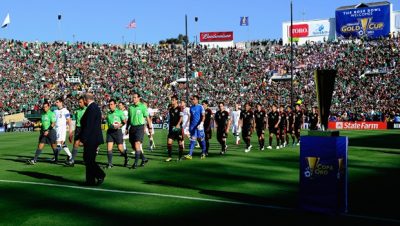 It’s a game that is memorable for so many reasons, though if you talk about it with Mexican fans, you might get the impression that one divine moment of improvised brilliance from Giovanni Dos Santos was all that happened on this day. We’ll get to that famous chip in a moment. We have to start from the top.

The two giants of the region actually came into this final having been fiercely challenged throughout the tournament. The United States lost to Panama in the group stage, before enacting revenge against Los Canaleros with a 1-0 win in the semi-final round. Mexico breezed through their group before having to come from behind to beat Guatemala in the quarter-finals (who else but Carlos Ruiz giving Los Chapines an early lead) and needing extra time to beat Honduras in the semi’s.

All that preceded was out the window when the opening whistle blew. A scorching hot day in Southern California greeted the two sides, as a raucous pro-Mexico atmosphere took control of the Rose Bowl.

“The one big section of U.S. fans got the ‘dos a cero’ chant going,” recalls one Mexican fan who was in attendance that day. “I’m sure the players heard it. It lit everybody up.”

One way to shut your rival up and temporarily hush the incessant shouts of “dos a cero” is to go on an unfathomable tear of four unanswered goals, two to draw level before halftime and two after the restart.

Pablo Barrera got the Mexicans back into the game in the 29th minute before Andres Guardado leveled the score seven minutes later. Barrera put El Tri in front just five minutes into the second half, as the game truly hit its boiling point.

Clint Dempsey cannoned a bending left footed volley that hit the intersection of post and crossbar, inches away from making it 3-3. Then in the 76th minute came one of the most iconic moments in the rivalry’s storied history.

Surrounded by what looked like the entire U.S. team, Giovanni Dos Santos suckered Tim Howard out of his goal mouth, brought him to his knees, made him crawl and flap in desperation like a sick dog after a bone, and sent the most ridiculous of left footed chips to the far post, literally up and over not only Howard but two other U.S. players. The goal put the game to rest, and Mexican fans have been telling tales of it as bedtime stories ever since.

The 4-2 result also spelled the end of the Bob Bradley era for the USMNT, Bradley getting the sack shortly after the game’s conclusion.

It was a day when Mexico fans told the Yanks what they can do with their “dos a cero” chants. It was a day when Gio went from fan favorite to folk hero. It’s a day that Mexican fans love to reference whenever provided with even the slightest opportunity.

Now to the pick of the bunch for fans of the USMNT. Any guesses as to where we’re heading? 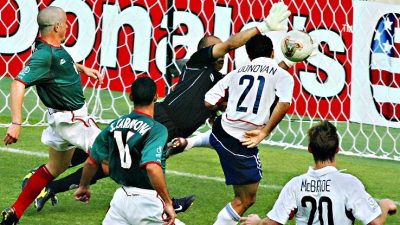 One of the finest aspects of this famous U.S. win is what it does for the fans, and what it will continue to do until Mexico and the United States meet again in a World Cup, something that is by no means guaranteed to happen, ever.

No matter how many Gold Cup Finals or trips to the Confederations Cup Mexico racks up, and whether or not they ever break the curse of Columbus, no head-to-head victory against the U.S. will match what the Americans did to them in June of 2002 on the grandest stage in the international soccer world.

The fact that the game is part of the “dos a cero” legend just adds kerosene to the fires of both splendor and disdain. It could’ve been 1-0 or 5-4. It would still carry the same significance.

Brian McBride opened the scoring in the 8th minute, a fast bit of thinking in the form of a quick free-kick starting a blistering piece of movement from the U.S. team. Claudio Reyna went on a thoroughbred run to the byline before sending a short pass to a streaking Josh Wolff, whose exquisite lay off into the box and into the path of McBride was met with a perfectly placed finish past Conejo Perez.

Mexico had their chances. They also had a semi-legitimate penalty claim thanks to the arm of Greg Berhalter. U.S. netminder Brad Friedel, who became the first keeper to ever save two penalties at a World Cup, thwarted the few serious Mexican attempts to equalize, and the score remained 1-0 until the 65th minute.

It was a lovely, lofted left-footed ball followed by a lovely, whipped left-footed ball. John O’Brien sent Eddie Lewis darting down the left sideline. Lewis served Landon Donovan the chance of a lifetime on a silver platter. The chance was headed home. The shirt was ripped off. The celebrations ensued. It never gets old for U.S. fans. It never stops irritating fans of El Tri.

There was perhaps no one more irritated than Rafa Marquez, who was sent off minutes later for one of the most despicable plays you will ever see on a World Cup pitch, an aerial challenge on Cobi Jones that looked like something out of a kung-fu flick.

Though the Yanks were knocked out by Germany in the next round (in highly controversial and extremely cruel fashion it should be said), this win against Mexico carries its weight in gold in terms of banter and debate among supporters. Unless they meet again in the knockout rounds of a World Cup, it simply can’t be matched. Now that’s a back pocket ace that very few fans around the world have.

We’ll see what happens on Friday in Columbus. Mexico, quite frankly, look primed to break the Ohio curse, or at the very least score their first ever goal at Crew (Mapfre) Stadium. The U.S. have history on their side of course, and if they win for the fifth consecutive time in Columbus, Mexican fans might just pray that it’s not by a certain scoreline.